This is Chouette, Cleddau and Tentatrice all together for the first time in two years. 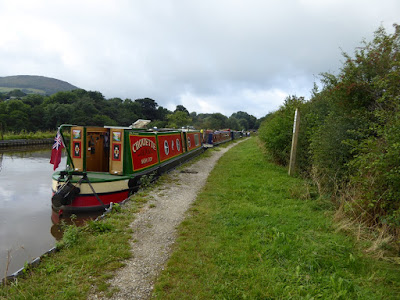 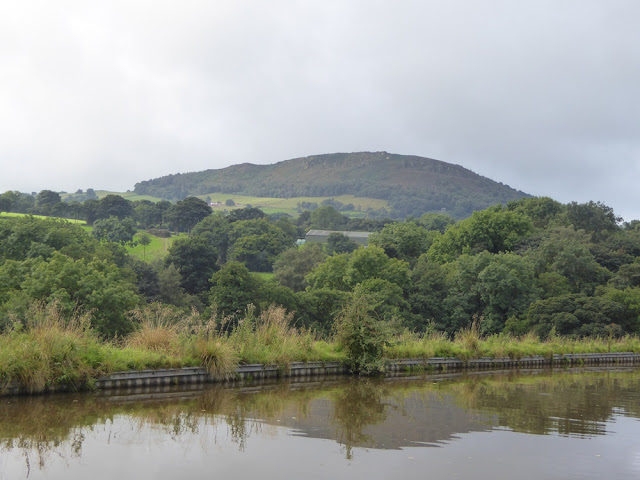 The first thing we had to do this morning was go up one lock, wind (turn), go down the lock and the head off back the way we came on Sunday. 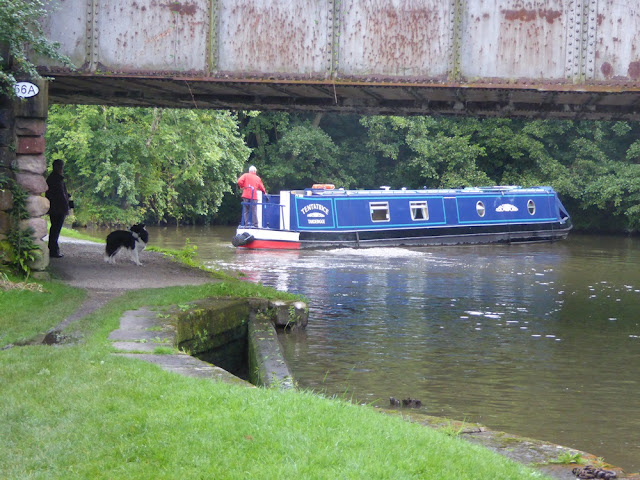 Spotted en route - a cow with a difference 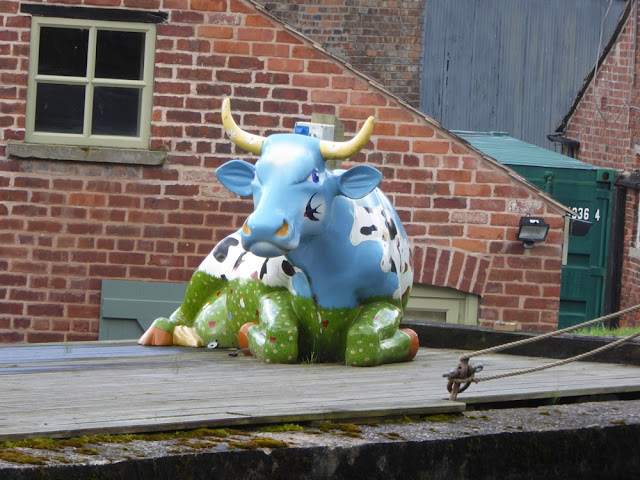 And we had Cleddau following close behind 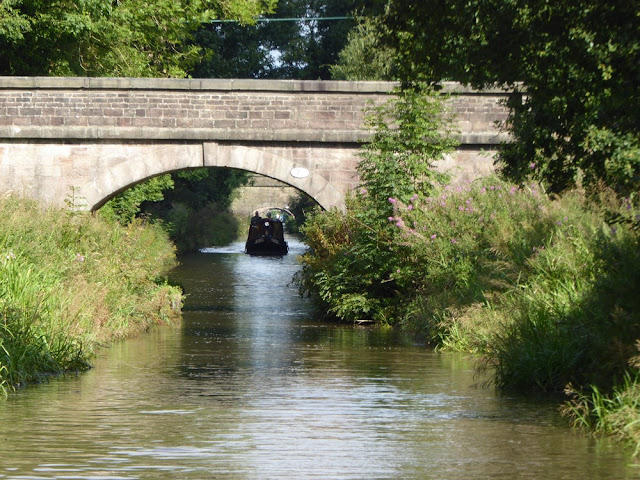 We moored by those lovely railings mentioned in the last blog 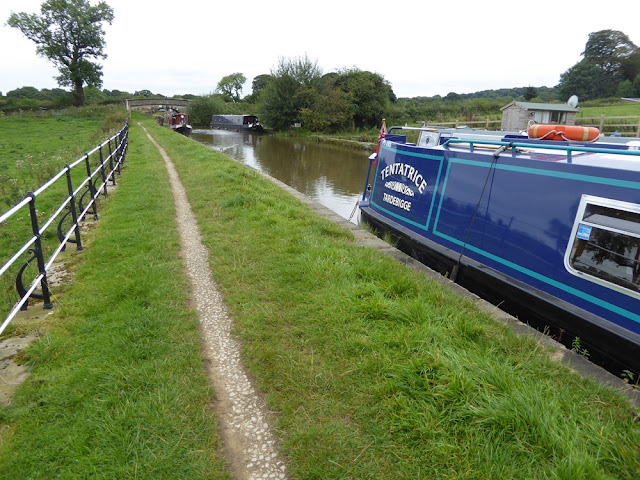 Sue and I headed off across the fields to visit the NT property Little Morton Hall, but first we had to run the gauntlet of these ladies and their offspring.  They were standing right in the middle of the path - we had headed off to skirt round them, when some people coming the other way went right through them, so we followed suit.  We are both people who would prefer a fence between us and a herd of cows!  We made it safely. 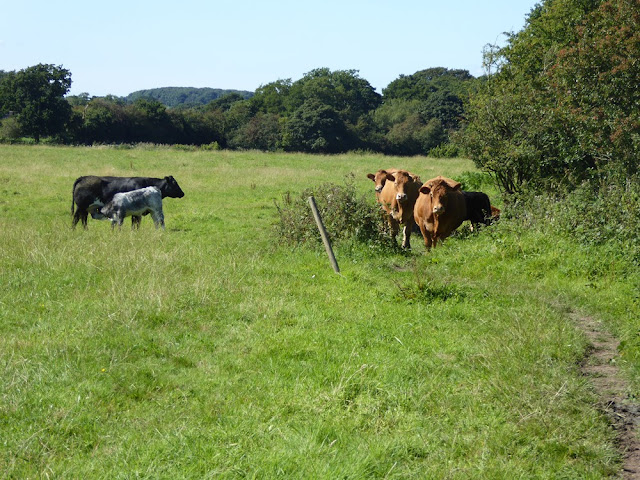 This is Lower Moreton Hall built in the 1500's and everything is as it was all those years ago.  Nothing about this property is straight.  We arrived just as a guided tour was starting - good timing on our part. 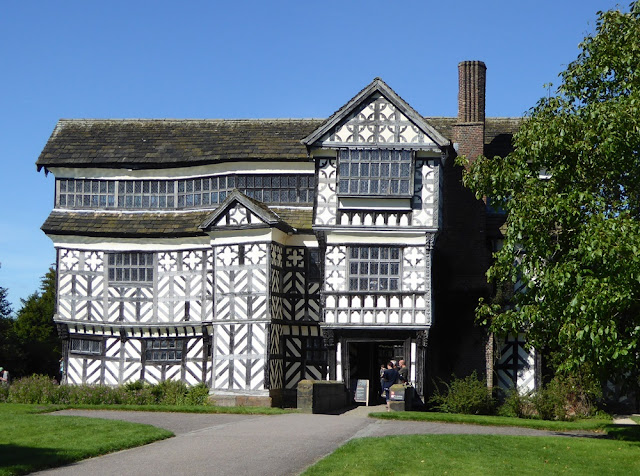 The property is fully moated 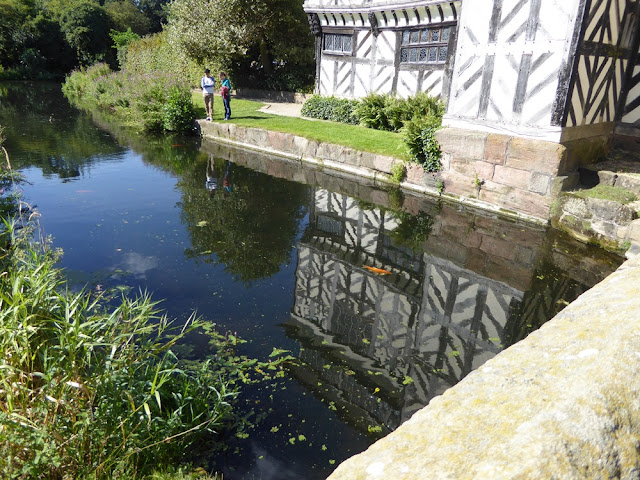 It was built in a number of parts over several years.  It is definitely worth a visit if you are passing this way 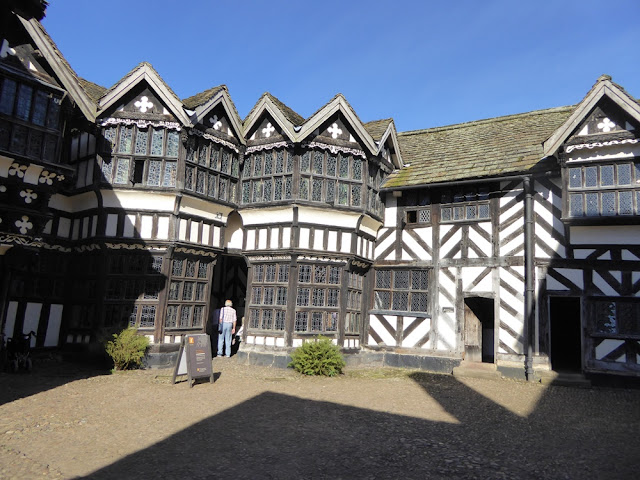 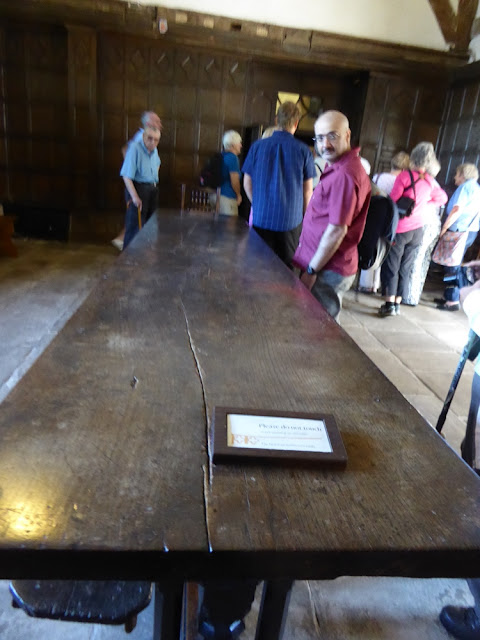 This table is a another piece that dates back to the 1500's. 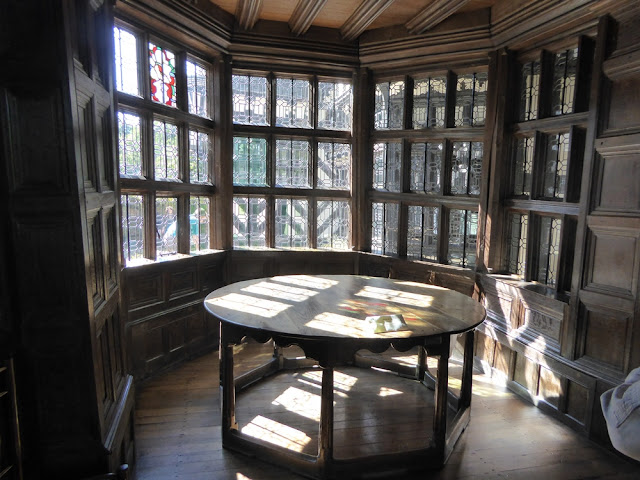 Things inside are no straighter than the outside.  In this room the fireplace is the only part that is true.  If you stand with your back to the wall opposite the window, fix your eyes on a part of the window and walk forward you really do feel as though you are going downhill. 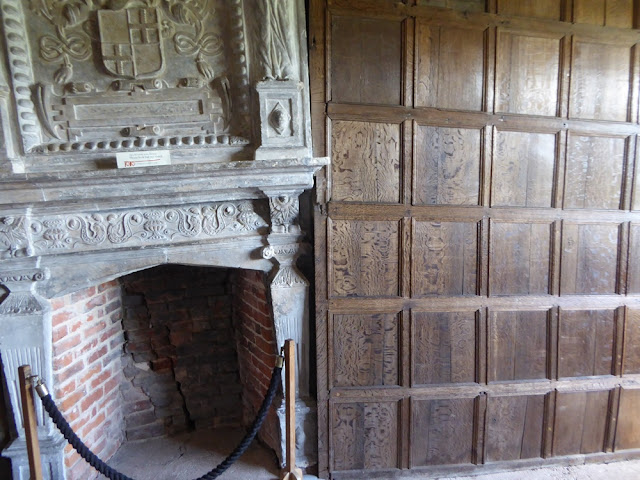 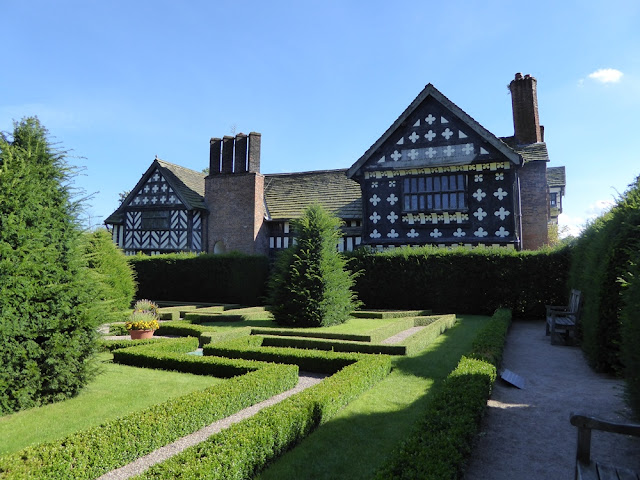 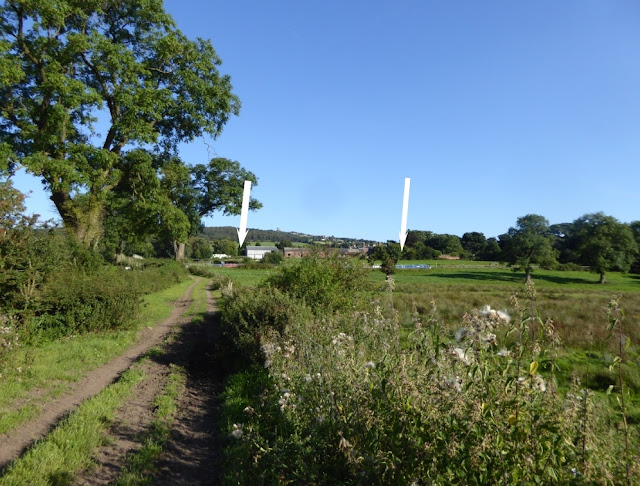 And also the folly at the top of Mow Cop - another sight that is often obscured by clouds. 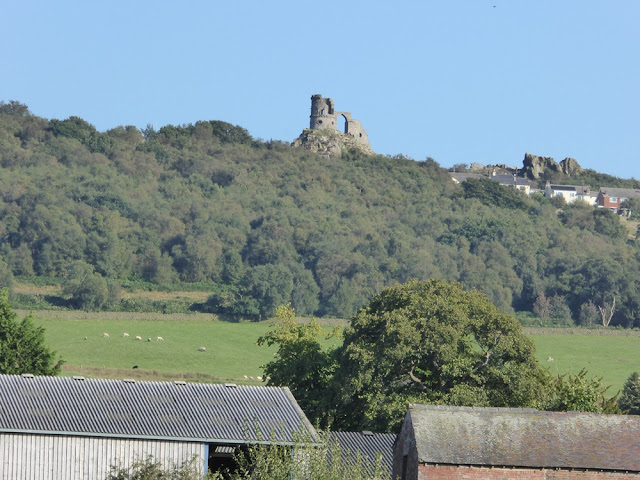 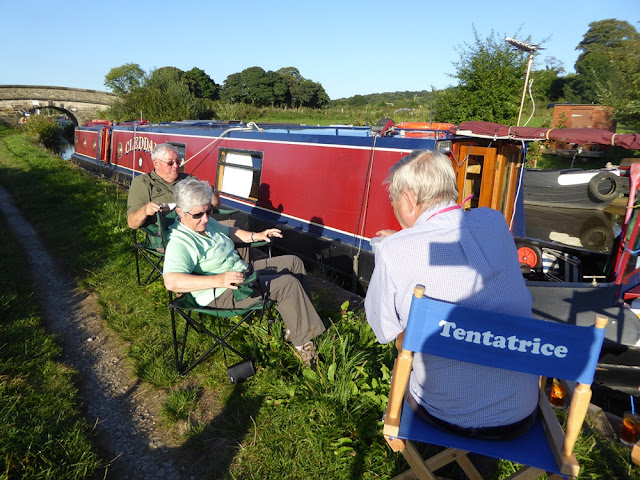 We also had the promise of another good day tomorrow 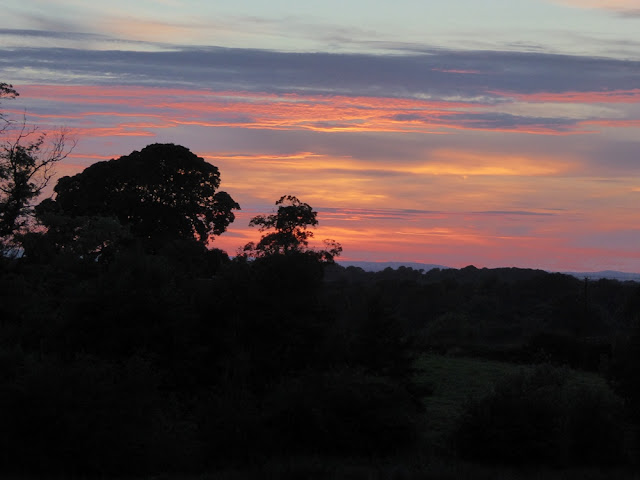 Today was a day of bits and pieces that seemed to go on and on.  We set off around 09:30.  Monty and I went ahead on foot heading for the water tap at Hall Green.  On the way we passed Chouette at her home mooring and bade them farewell. 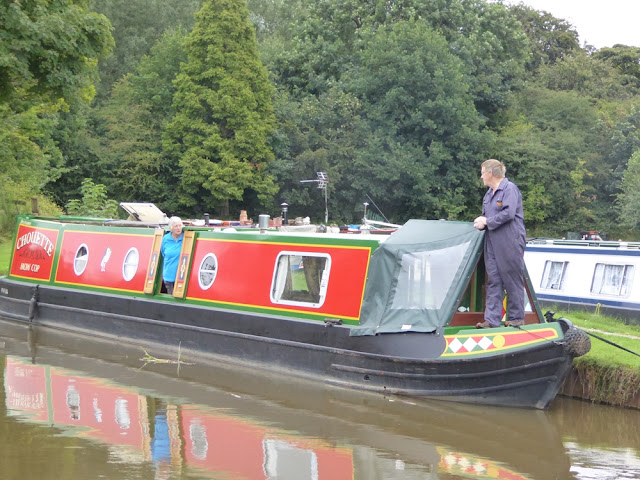 On we went to Hall Green to find that there were two boats there already - one filling with water and one waiting.  It took around an hour before we had both had our turn with the tap and could be on our way.  Cleddau went ahead and by the time we left there were no boats for water or the lock!!  From there it was back on to the Trent and Mersey, but this time we turned left and continued northwards.  There are several sets of locks and most are a pair of locks.  It managed to confuse Monty who was used to the boats sharing the same lock last year, but now we had one each!  We stopped at Tesco's and both had so much heavy shopping we decided to get a taxi back.  It was not far - the fare was just £3, but it was really well worth it.  The taxi driver was probably the best I have ever come across.  Not only did he pack all the bags into his boot, but he got out and carried four bags down the tow path to the boats.  Needless to say he got a good tip. 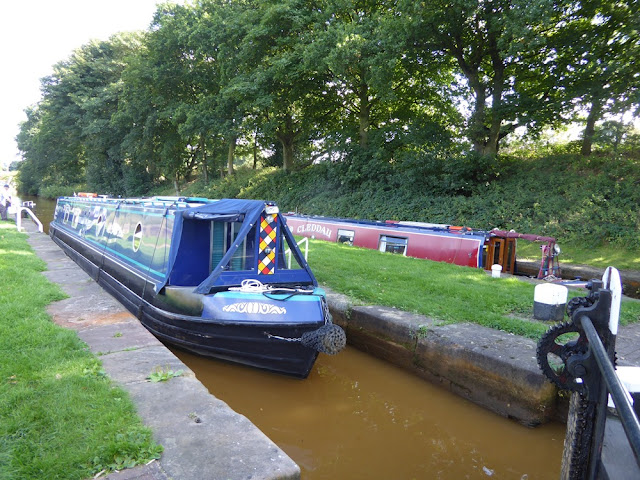 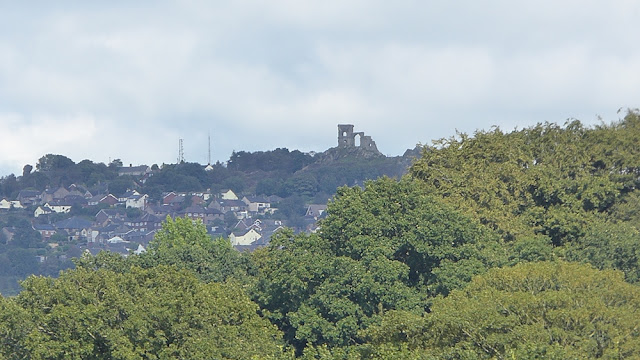 We initially moored two locks up, but when someone came and said that the lock below us was leaking water and we realised the pound was going down as we watched it. We went and looked and sure enough water was pouring through the hinge area of the top gates.  So it was a case of' Action Stations' and all hands on deck as we made the decision to move down two locks rather than risking ending up in a dry pound by the morning.  It meant we went from good moorings on rings to a rather overgrown towpath edge and having to put pins in for the first time this trip.  It also meant a late dinner, but we do have lots of water under the boats, so we should still be afloat in the morning. 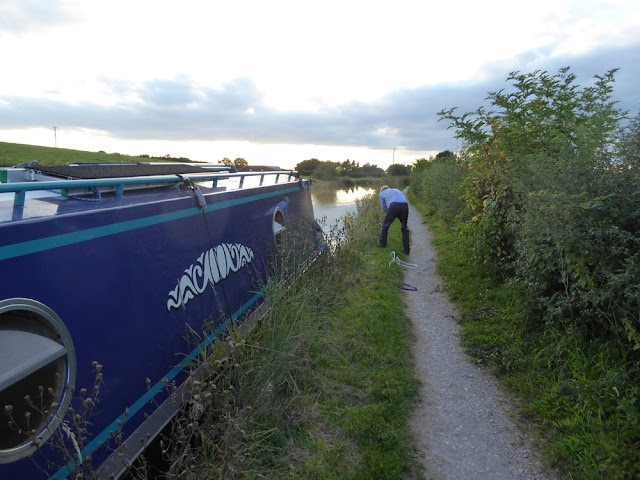 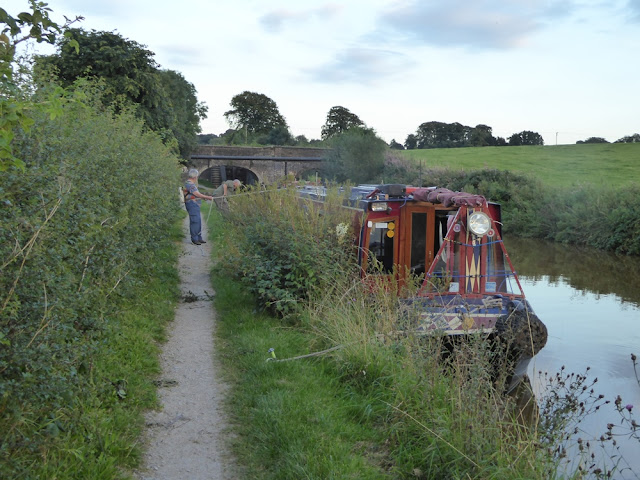 I was a bit late capturing the sunset tonight (blame the move), but I hope it bodes as well for tomorrow as yesterday's did for today, although the weather forecast has just promised us rain in the morning. 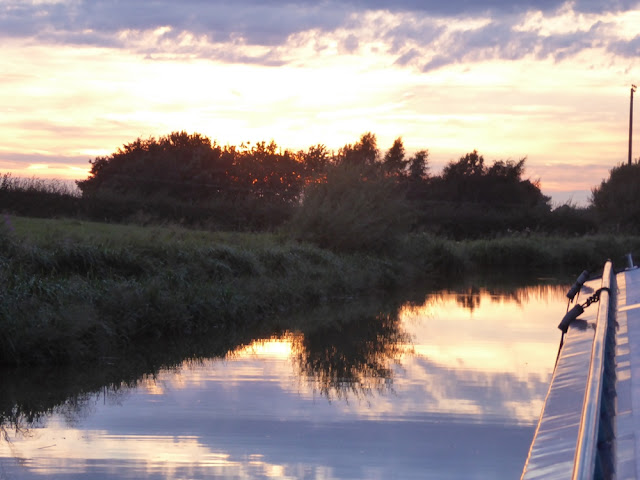 And this was noted en route - added for one of our grandsons, but I hope he is never Lonesome. 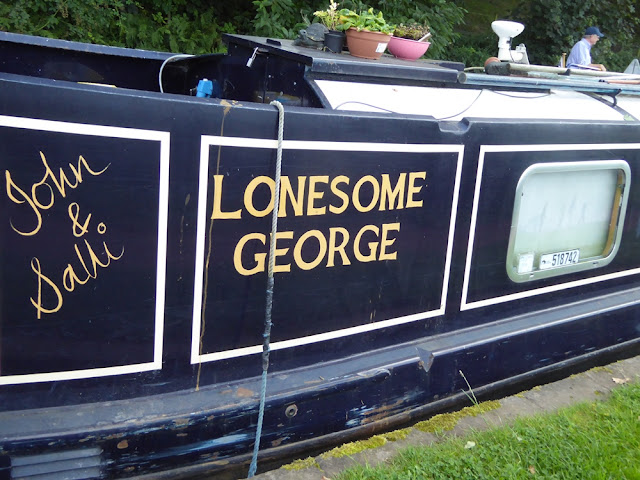