Oooops how embarrassing is that!

Whist we were discussing the problem we have with the engine (the header tank keeps emptying once the engine has cooled) with the boat builder we asked about having drawers put in under the kitchen cupboards where the kick boards are.  We knew we had discussed it during the build, but were both sure we had opted not to have them done.  Bob said he was sure they were done as he ordered the parts and sure enough when we got to the boat with him this is what we found! 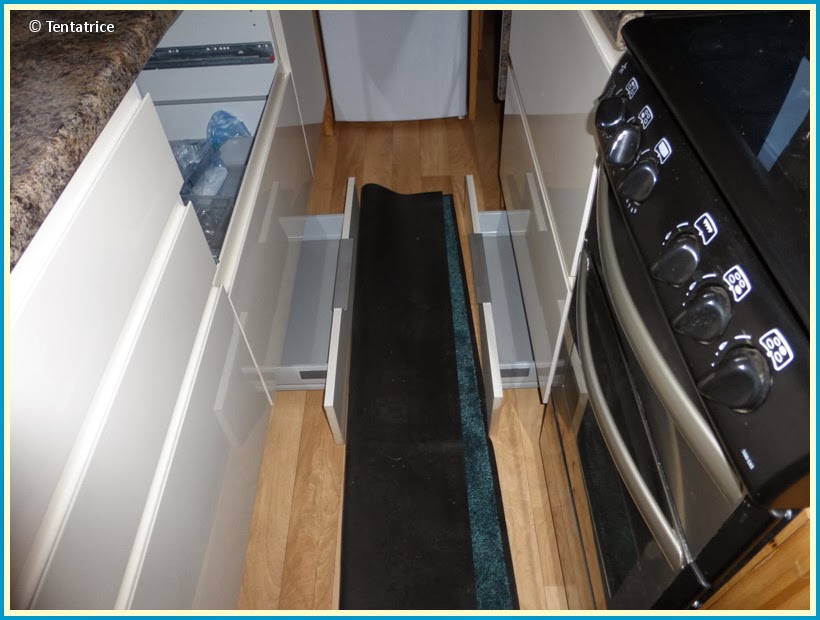 Unless you know where the hidden silver handles are you would not know they were there, which we patently didn't!!
Posted by Jennie at 03:54 1 comment:

Major work is being undertaken on the large top lock (the largest narrow lock in the country)  at the top of the Tardebigge flight (also the longest flight in the country)!.  We walked along the tow path last week and could see the extent of the infrastructure round the lock.  Some fairly major preparation had to be done before work could commence.

The pound below the top lock is very long (700 metres).  It all had to be drained and any fish (23,000 of 24 different species) left were netted and moved down to other pounds and deep water.  Apparently it is one of the 'healthiest' pounds that has been drained in recent times.  Even the experts were surprised by the number and variety of fish.  You can see from the photo below (at lock 57 looking northwards towards lock 58 - the "Top Lock") why narrow boaters are often referred to as 'Ditch Crawlers'. 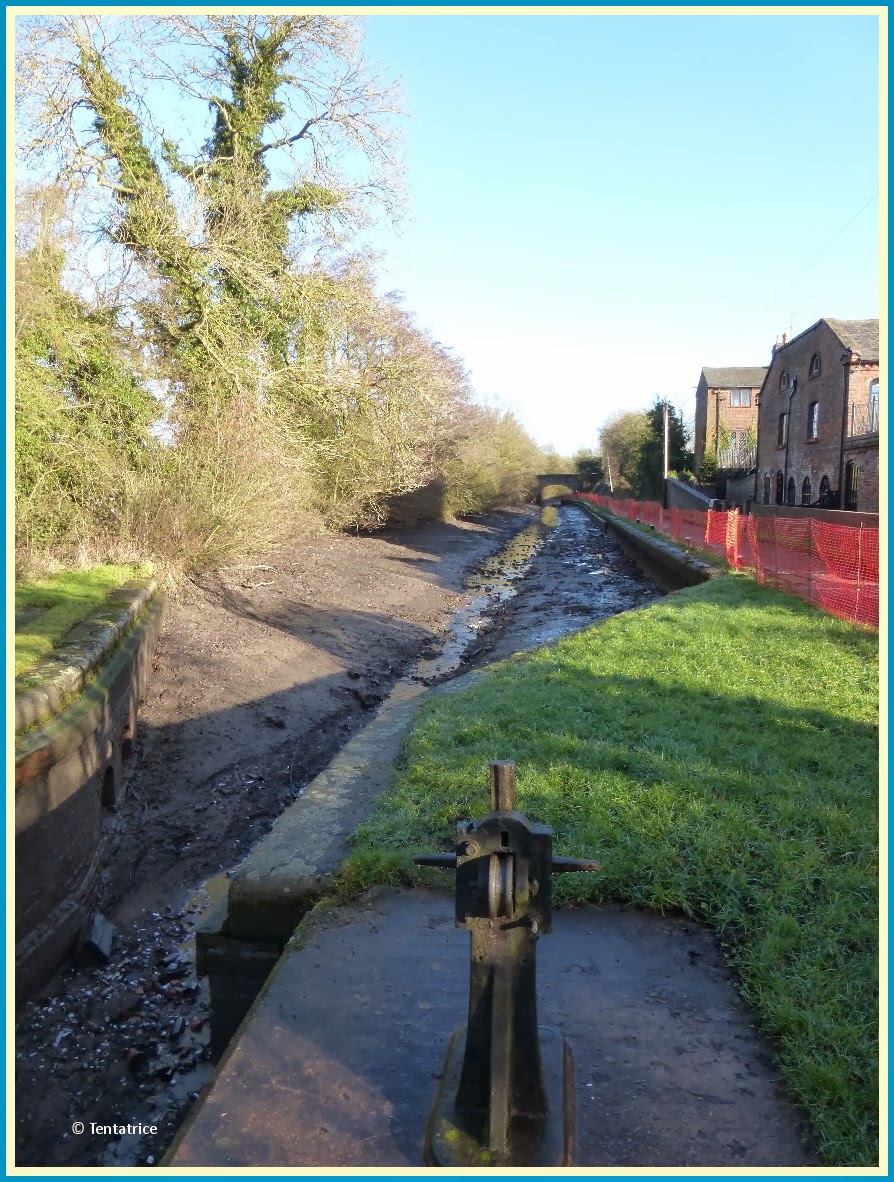 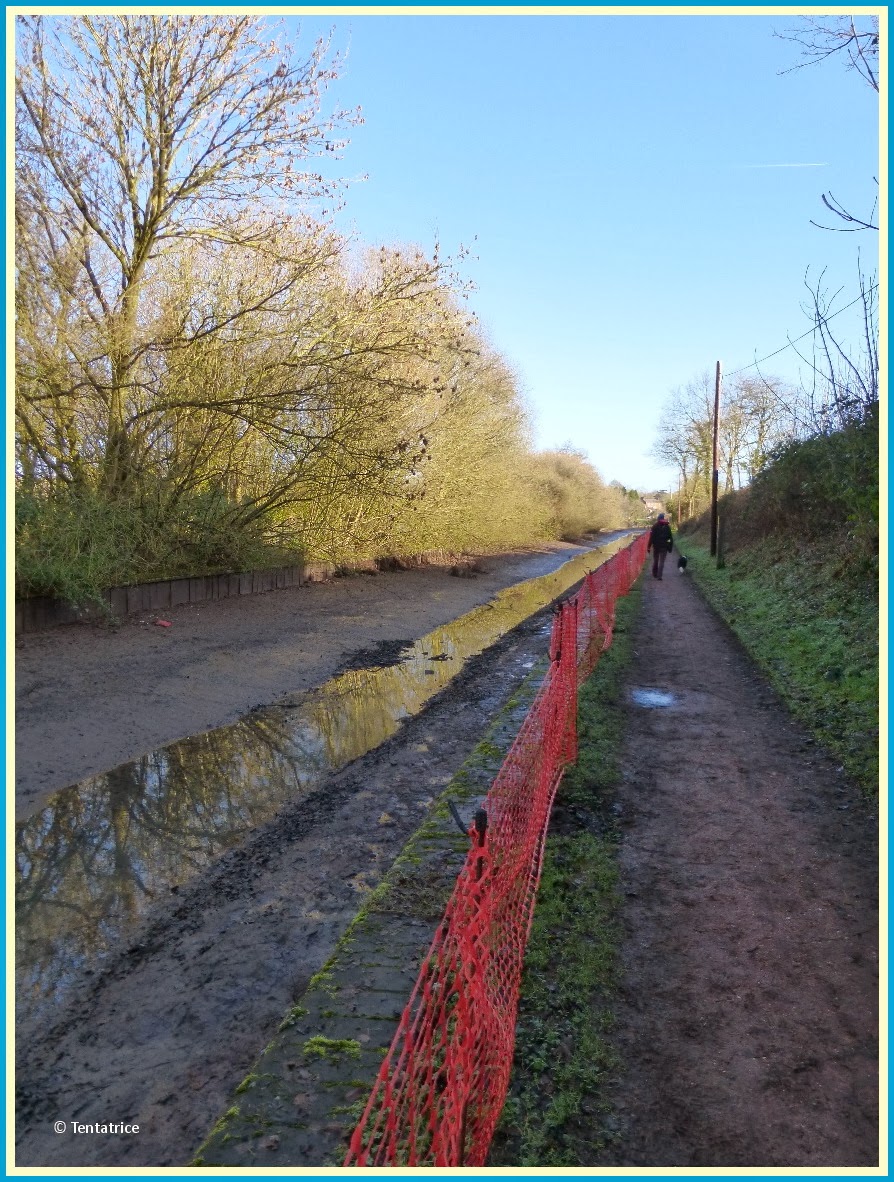 The fish were not the only ones who had to move - there are several residential boats on the non tow path side and they have lost their water temporarily. The chickens are still there, but the boats have gone. 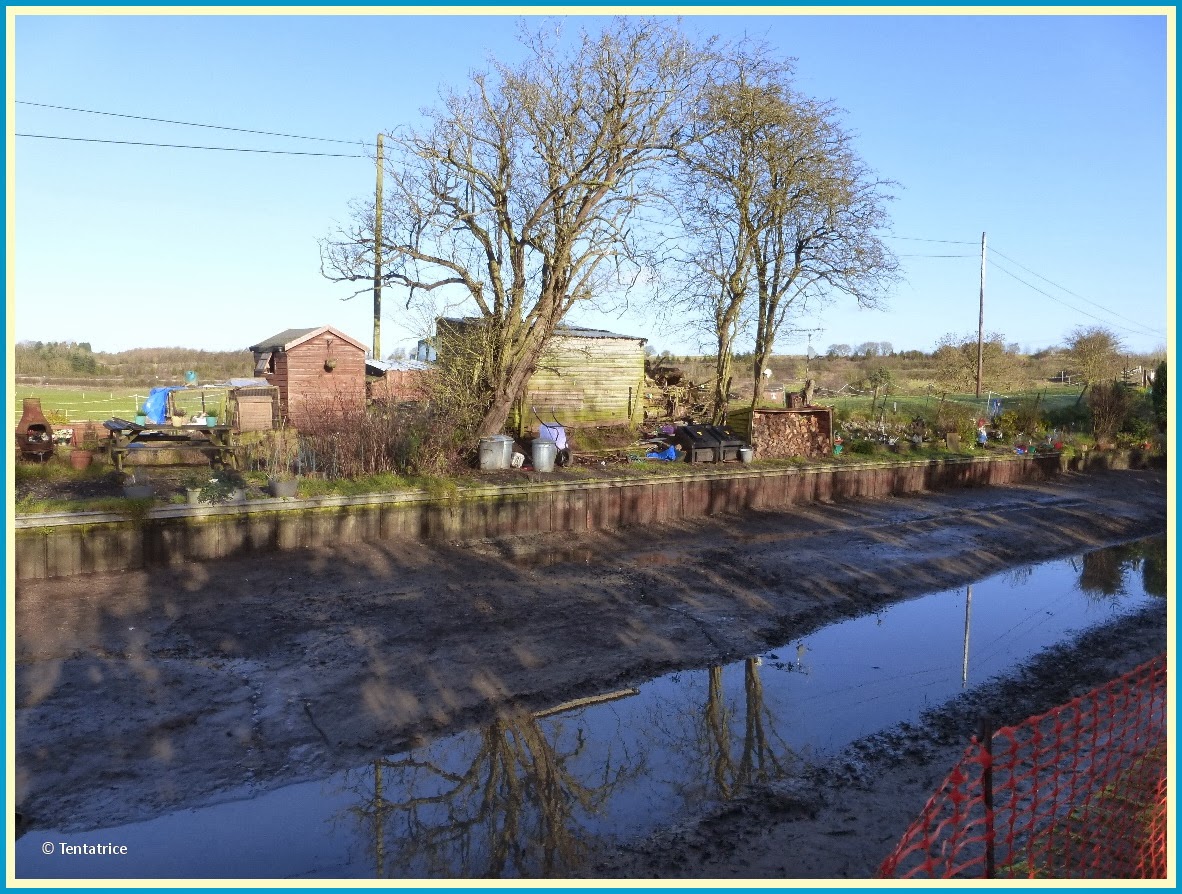 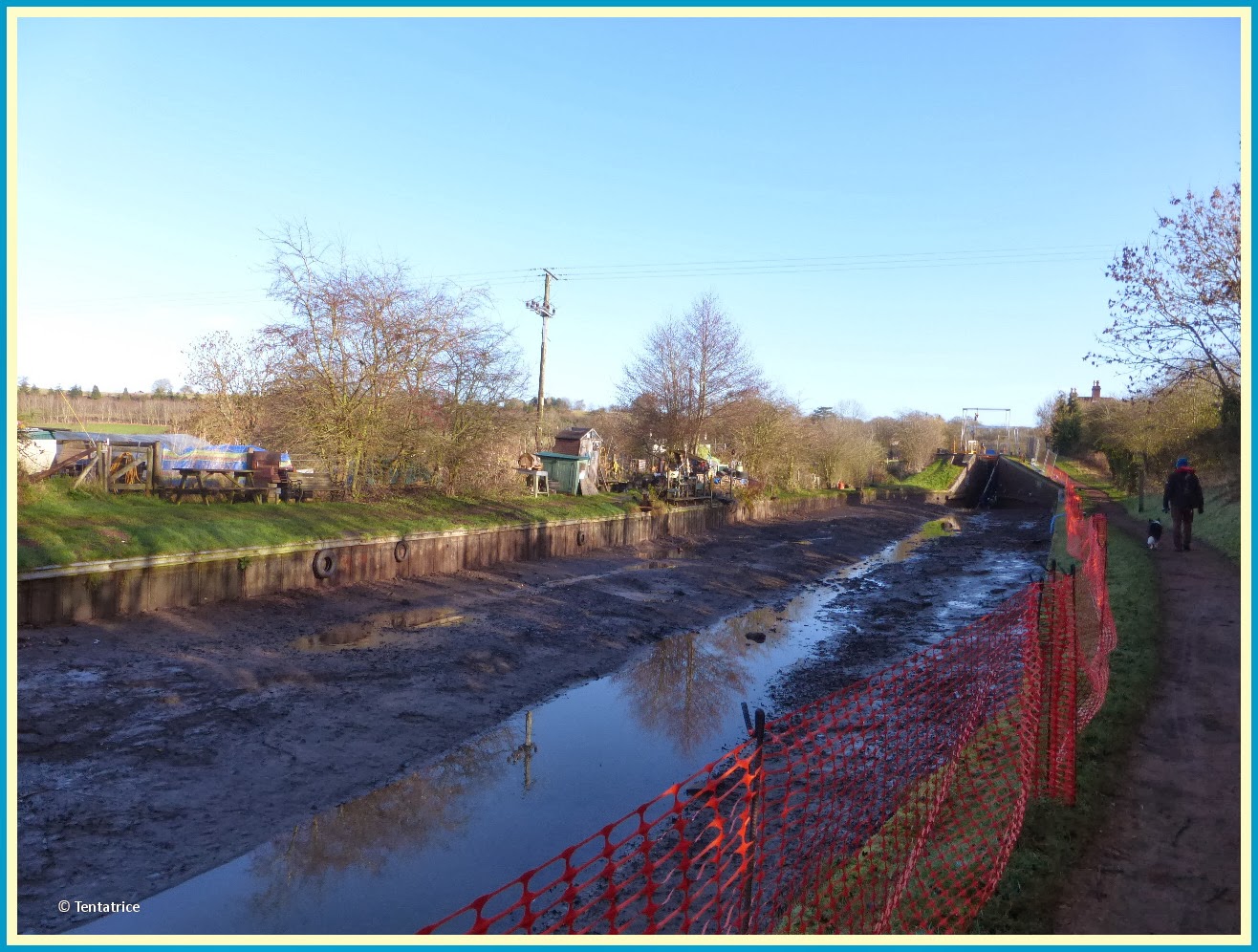 They are safely moored above the top lock for as long as it takes. 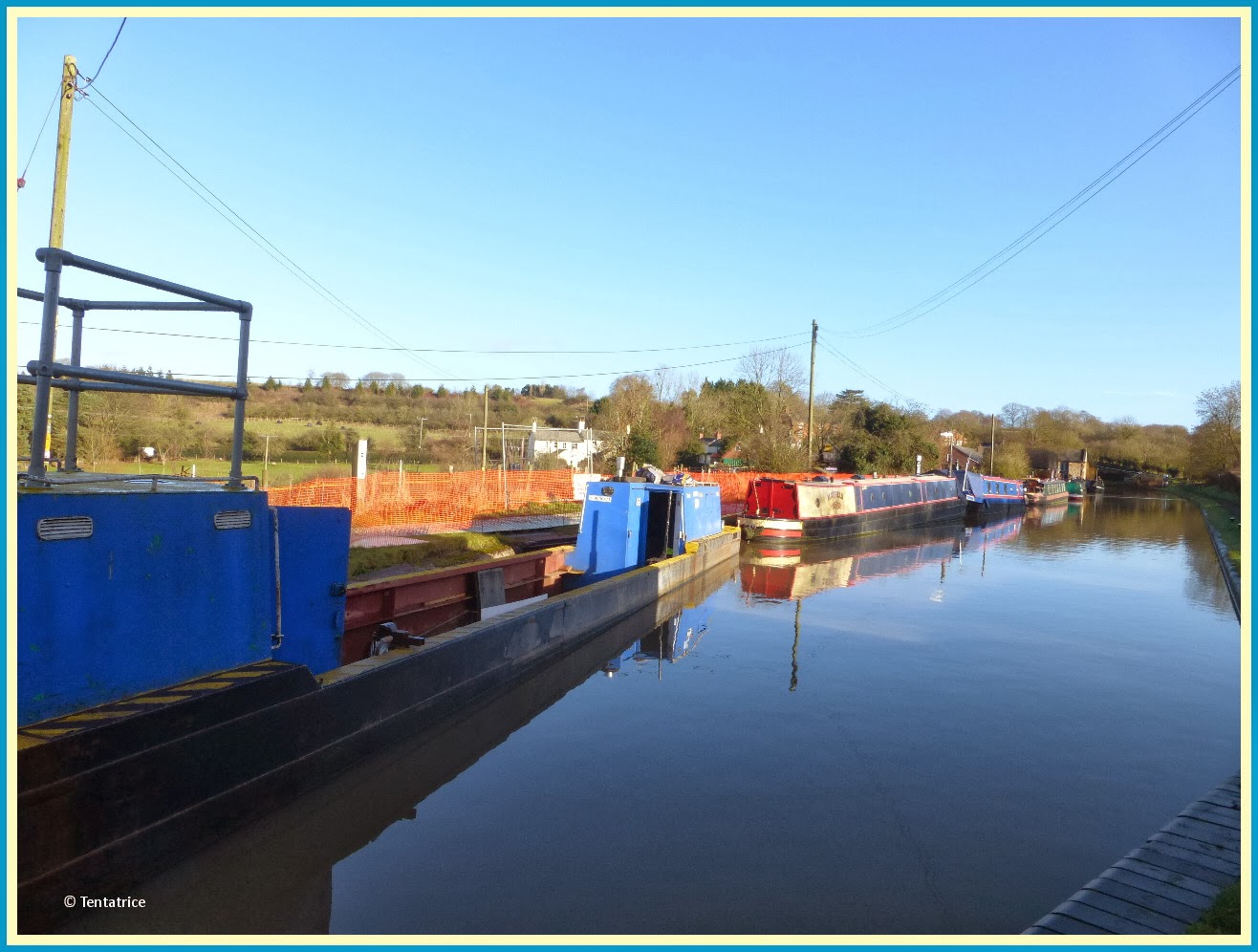 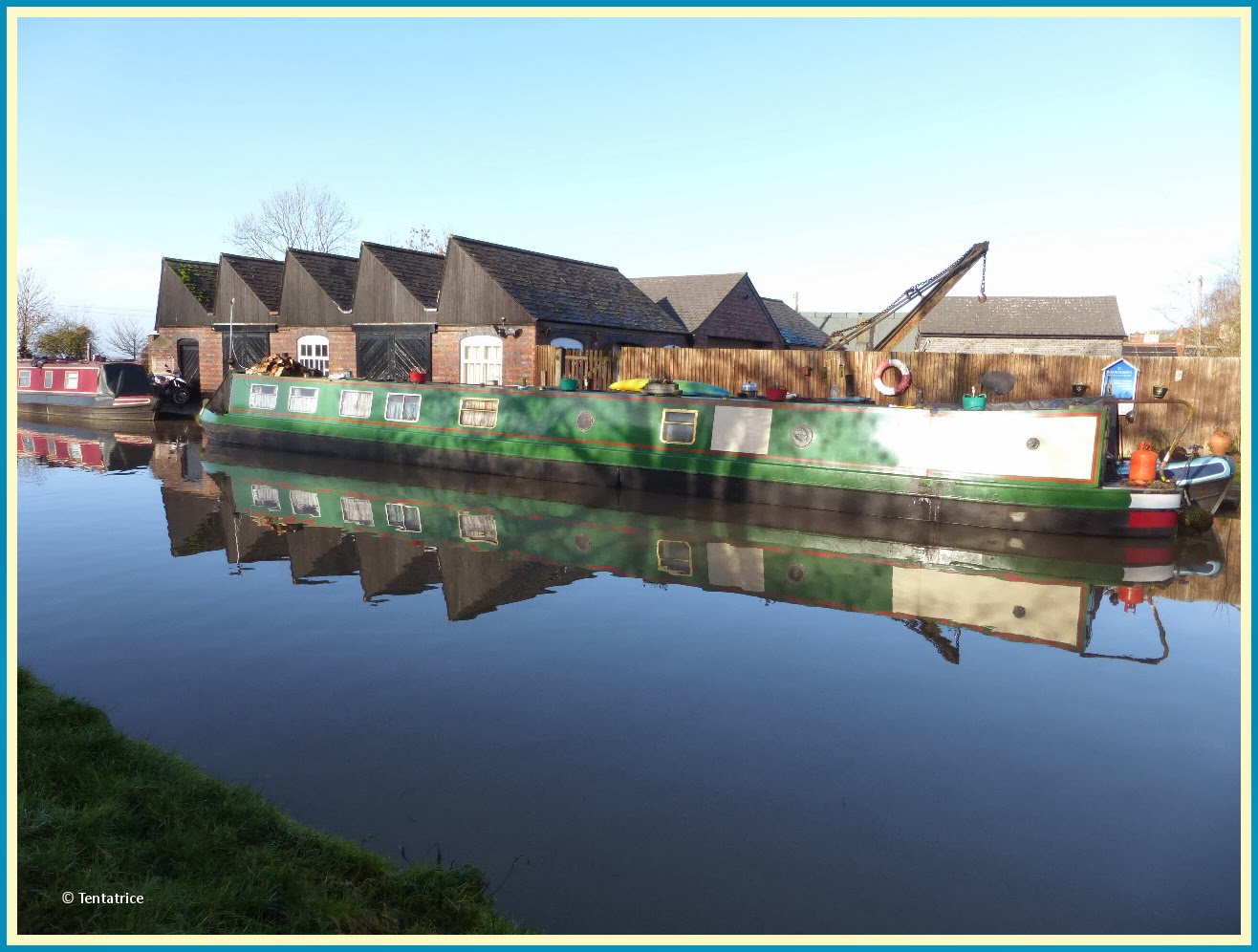 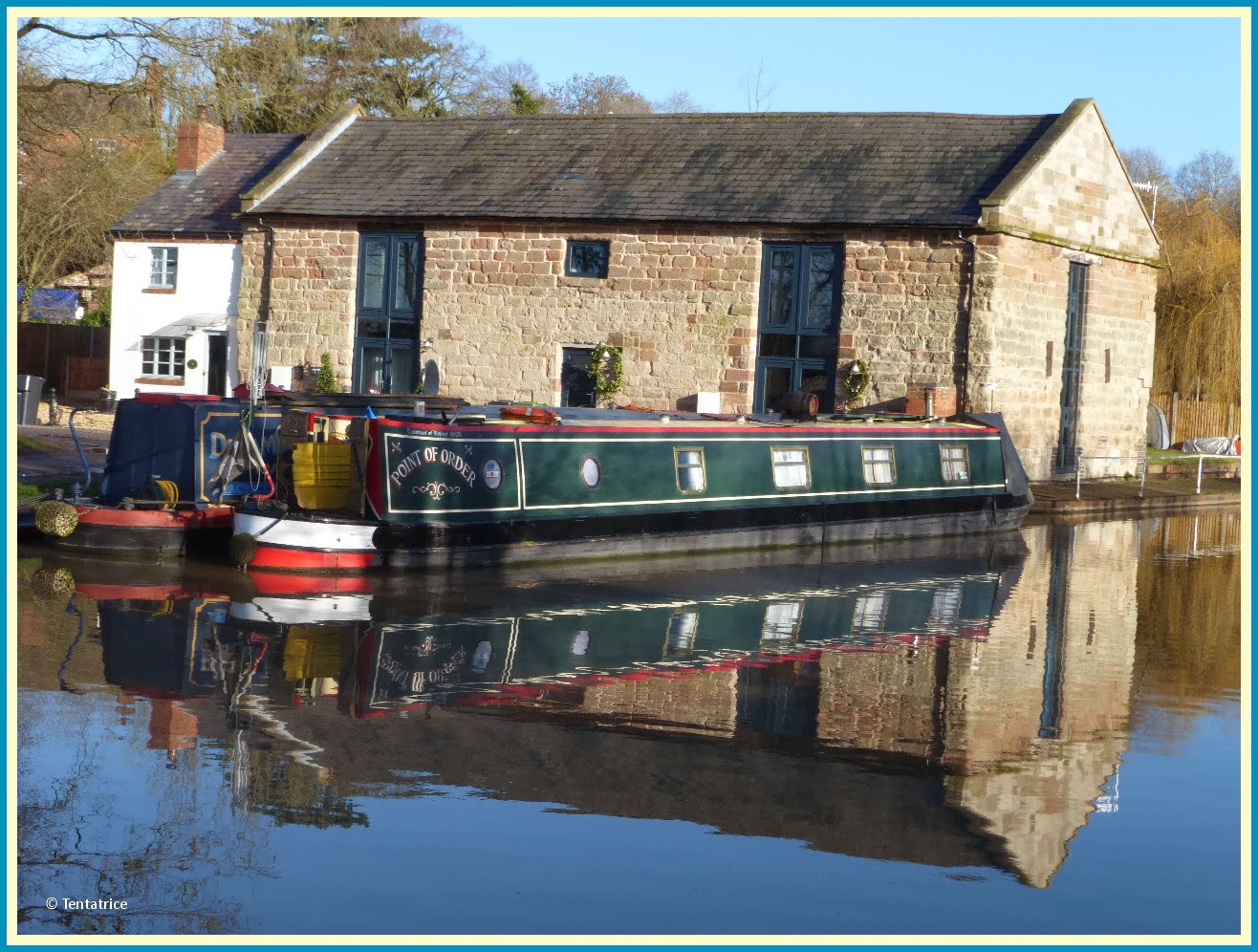 First sight of the lock 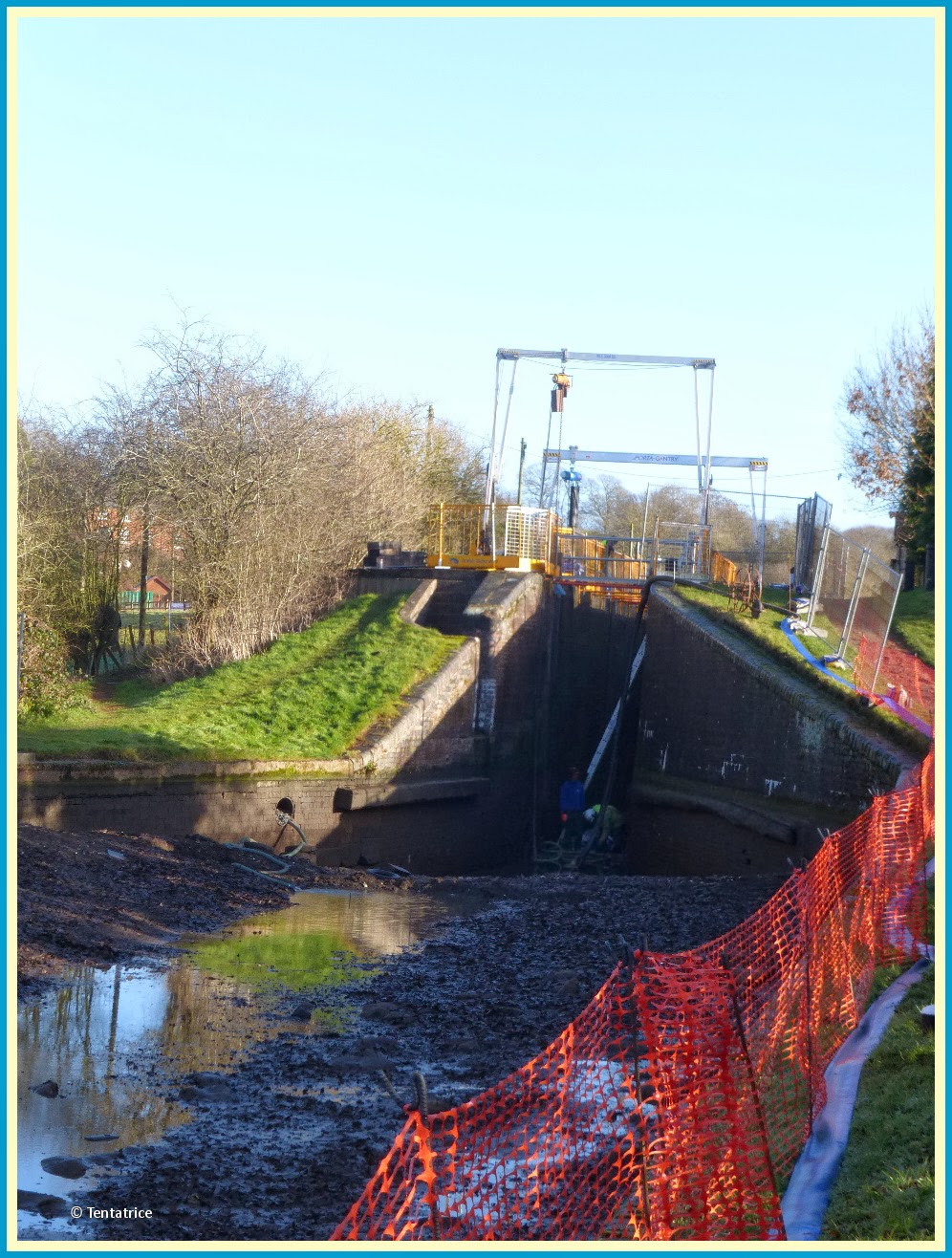 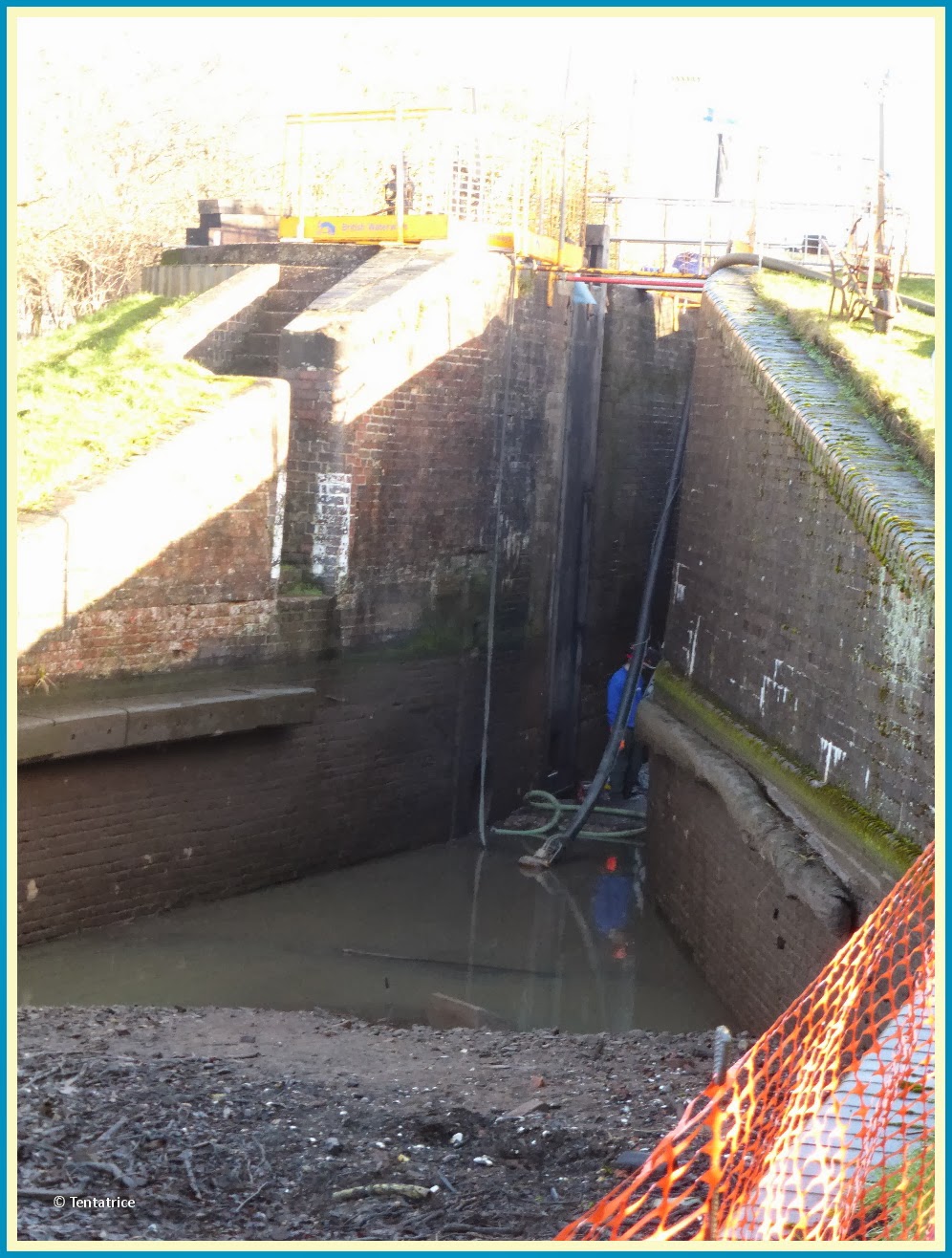 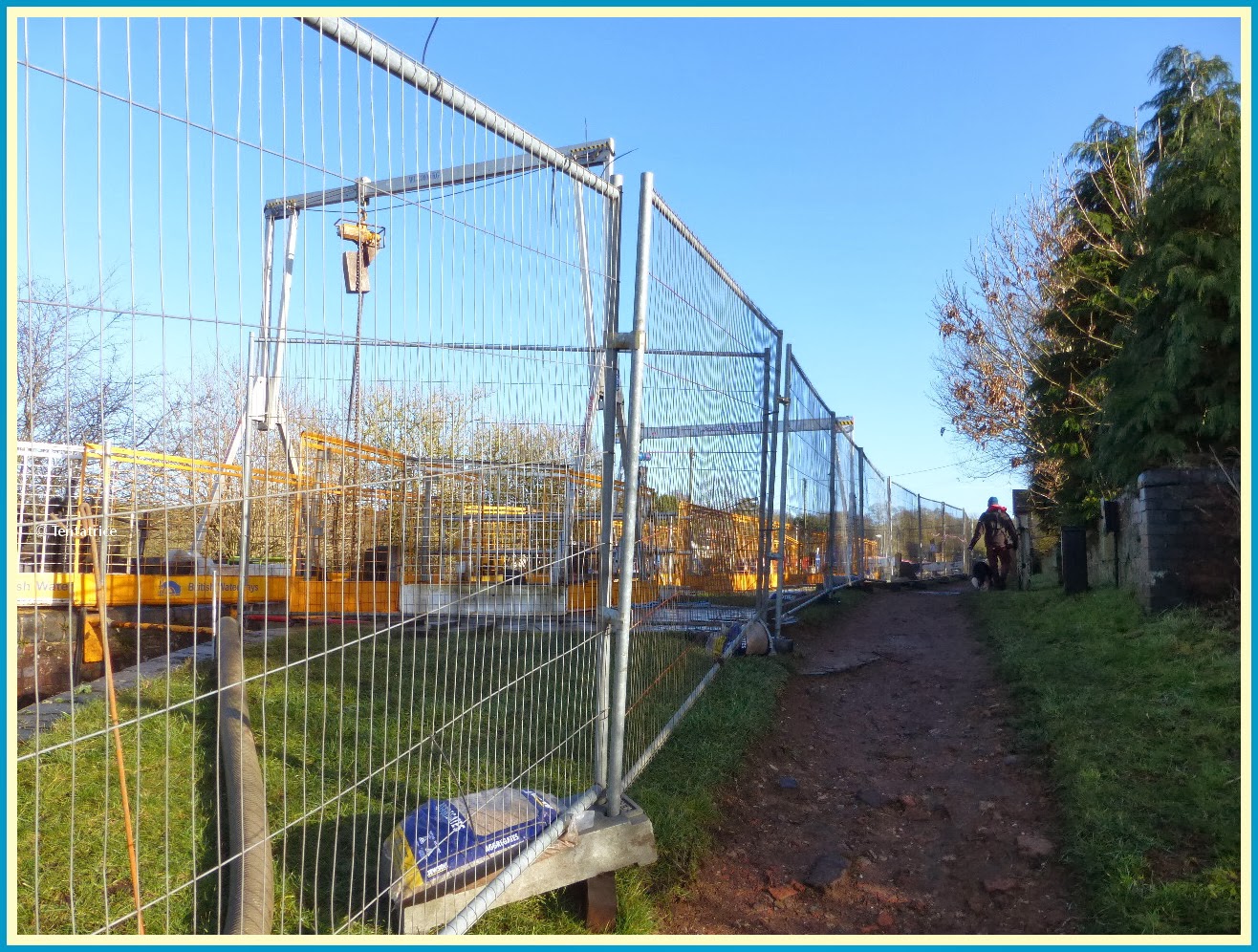 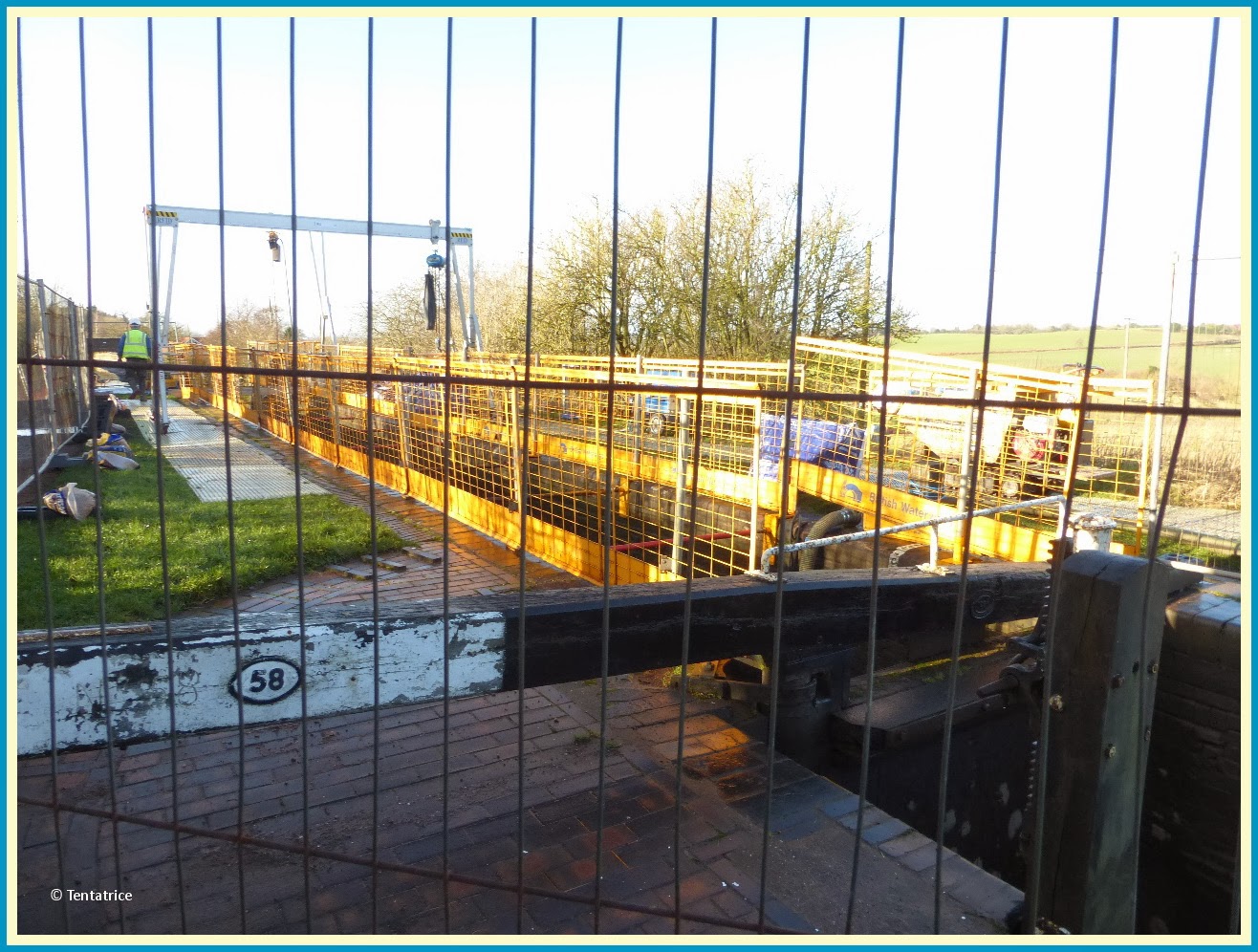 To the open day itself - one I am afraid I missed as I am under the weather and decided I should keep my bugs to myself, but Chris went along as planned to visit the bottom of the lock and he stayed for the morning to help with car park marshalling and talking to visitors hoping to drum up a few more volunteers.  I am hoping Chris will add a postscript with first hand words of wisdom in due course..  For me the pictures are very interesting - I have certainly never seen an empty lock and I am sorry I missed it in the flesh.  Apparently the bricks at the bottom are standard bricks and are as old as the lock (over 200 years).  The bricks above the lowest water line are engineering bricks.  Our daughter and grandson (G aged 5) went along this afternoon and despite a wait of 1.25 hours (they had tickets) they both enjoyed the experience.  I gather the hard hat and high viz jacket were a big hit with G!! 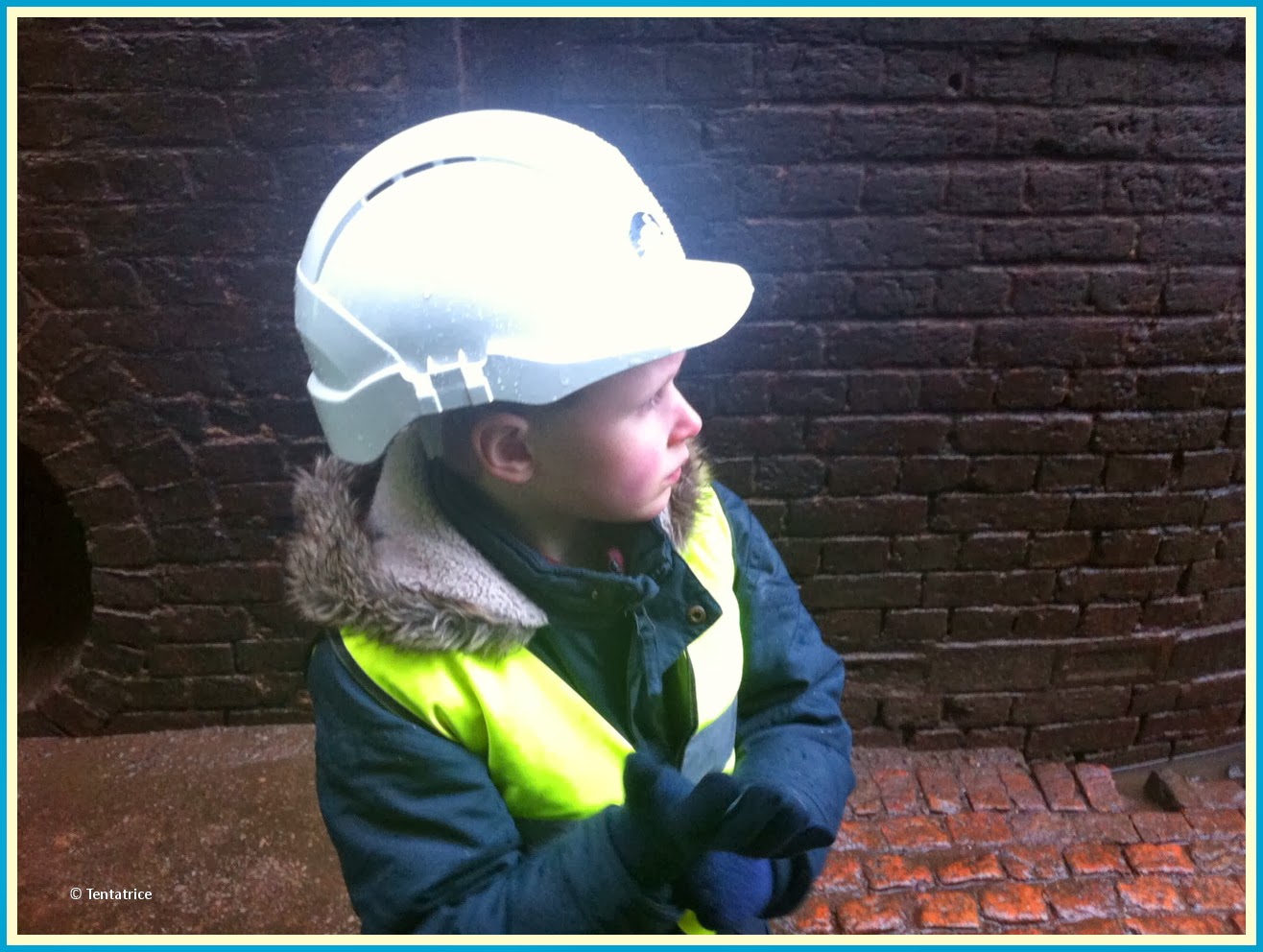 I hope it means that G will have more understanding of locks next time he is afloat with us.  The huge delay was due to the fact that a lot of people turned up without tickets - far more than was ever anticipated. 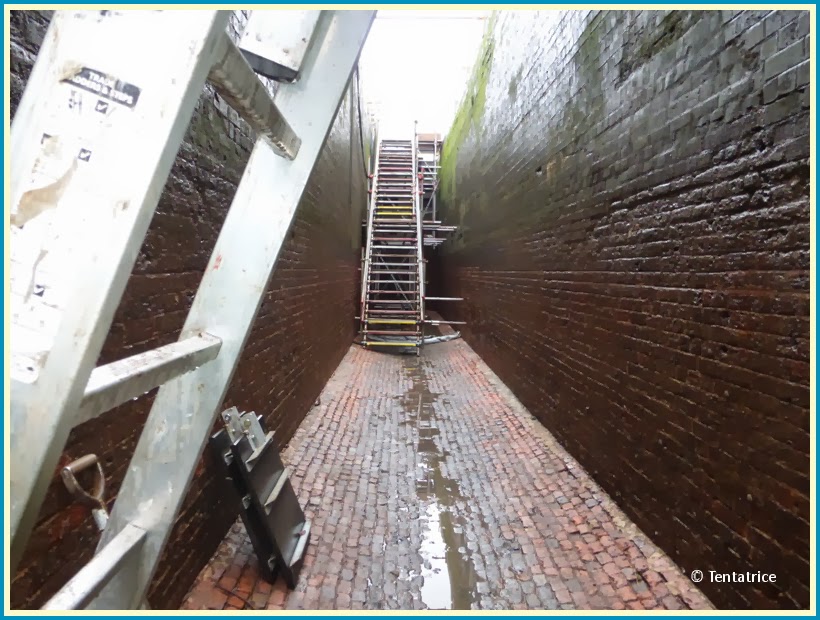 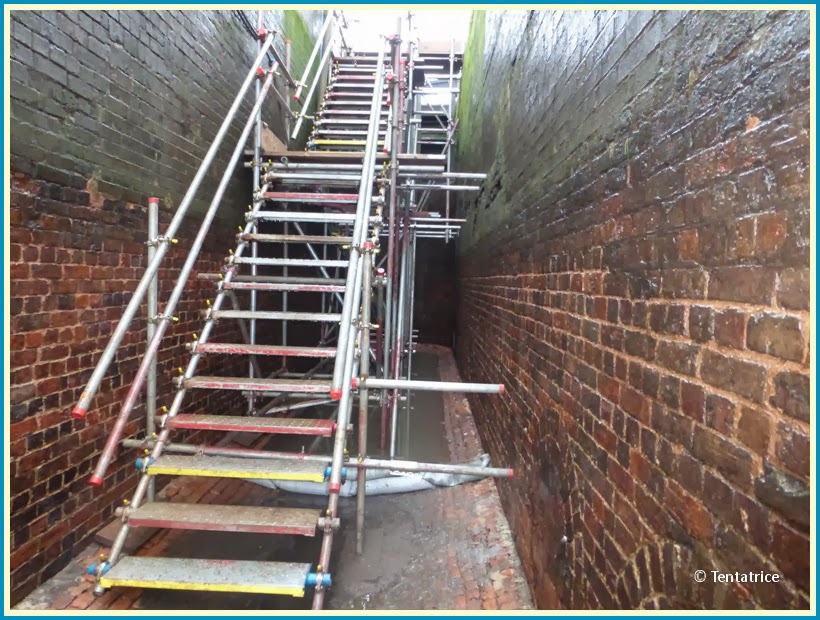 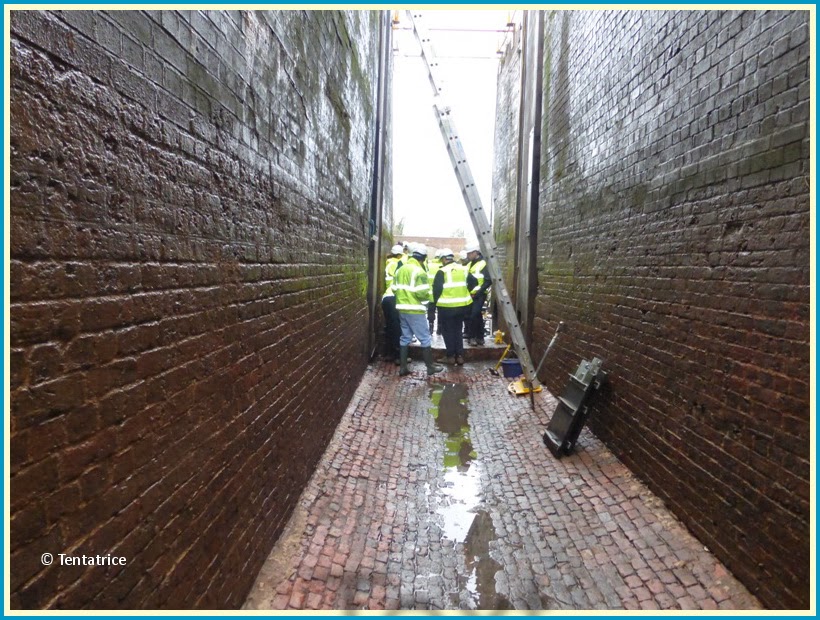 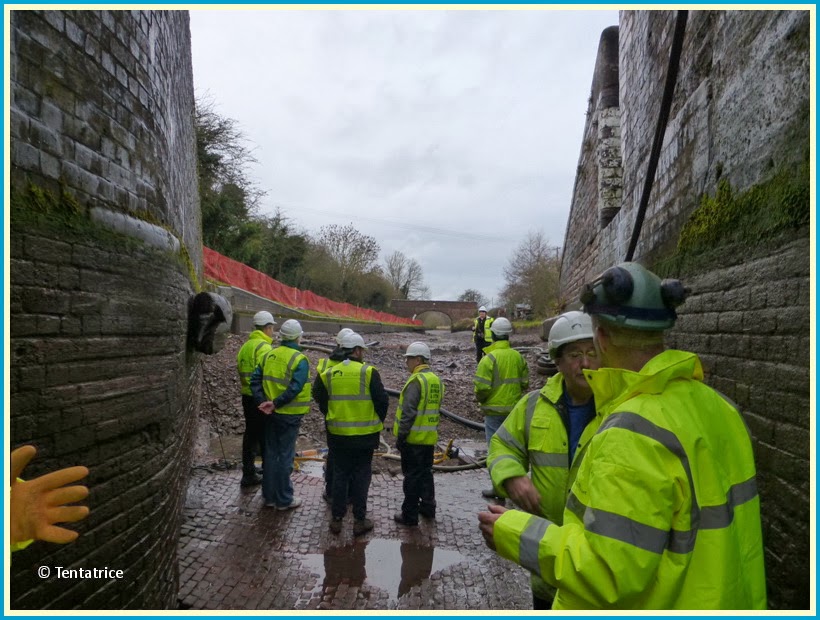 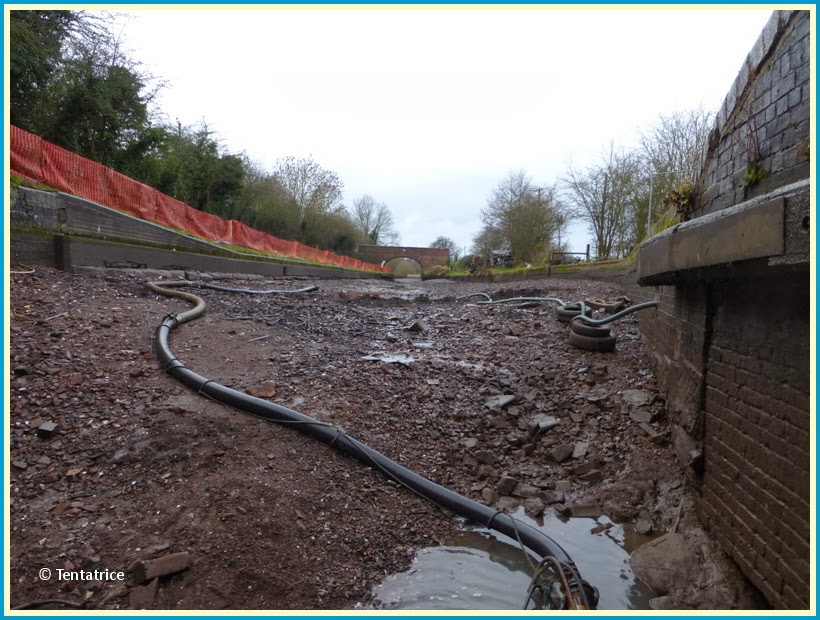 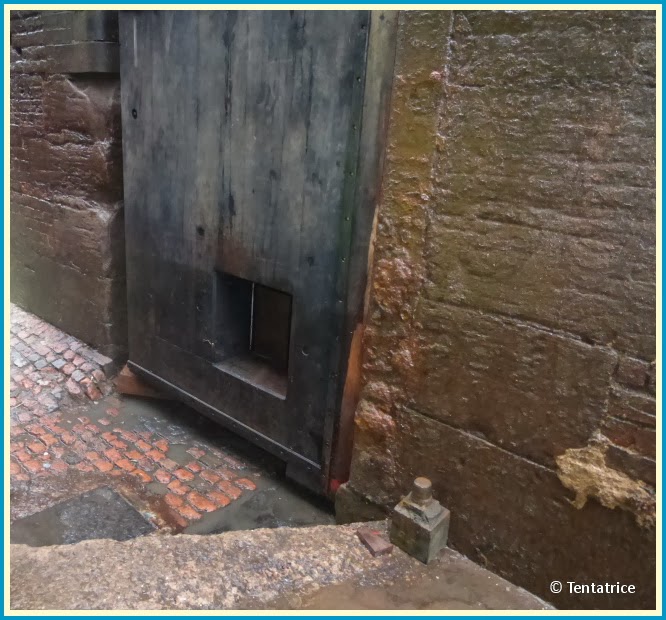 Chris did say that they excavated 14 tons of silt and mud from the bottom of the lock (all by hand), but surprisingly little rubbish.  Apparently at one lock in Worcester they moved 40 tons of rubbish along with the silt and mud.  We are lucky being so rural.  Considering the length of the drained cut there is not a lot of debris to be seen and they will remove the worst of it before they refill the pound and lock. 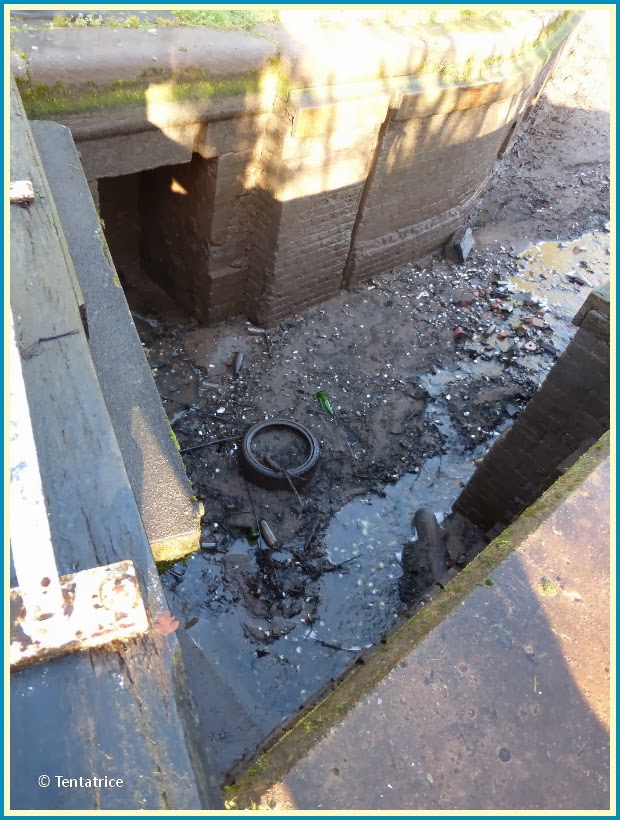 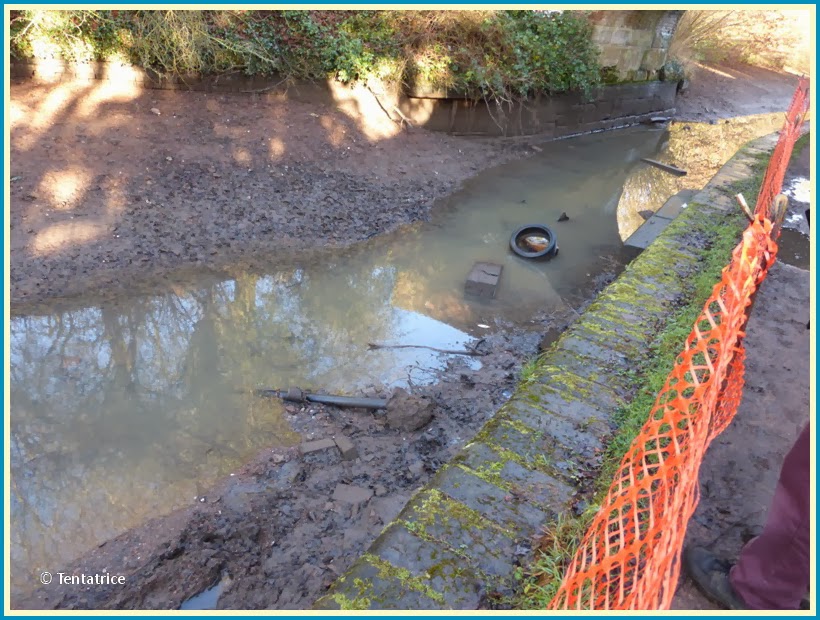 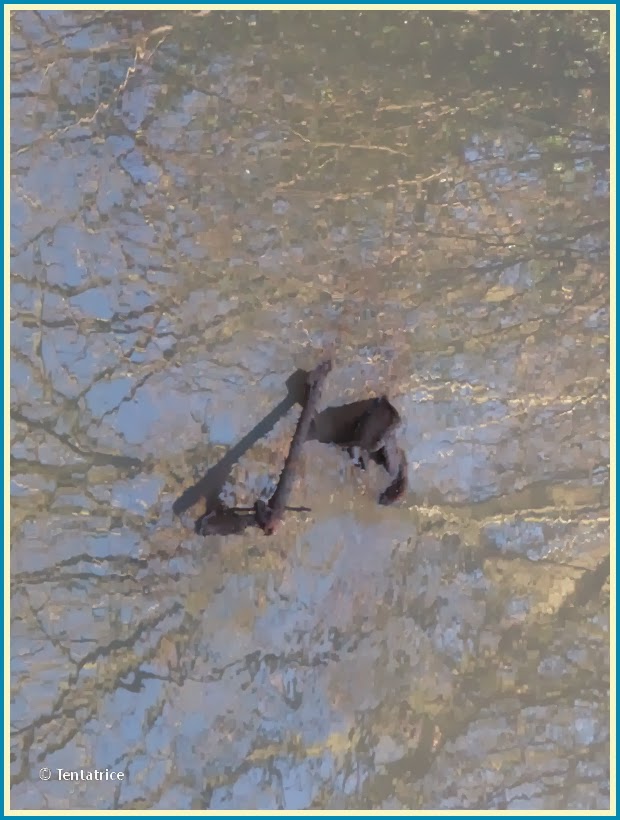 We will watch the rest of the work with interest.

There is little more to add to what Jennie has already written; the photos (a mix of J's, G's mum and a few of mine).  All I would say is that if you have not seen inside a drained lock (not necessarily one of the largest ones!) and the opportunity is presented to visit, do go ahead.  Bearing in mind that the engineering is probably approaching 200 years of age (OK, routine maintenance has helped), they are quite magnificent structures and give one some idea of the scale of what these early transport engineers were undertaking.  During my time today at Tardebigge I was made aware of the fact that before the canals, most towns of any size and importance were found only where natural water aided transport, i.e close to the sea or on major rivers.  The canals started the change to that, and then the railways, finally leading to the motorway network etc. of today.