Are we still here?

At the end of March Chris and I went off to Sussex for a holiday.  The main purpose was to catch up with friends and ex-colleagues.  It is 10.5 years since we left Sussex for Worcestershire, so it was definitely time to visit.  We hired a holiday let in a small village called Findon, near Worthing.  It was superb and I would highly recommend it if anyone wants a break in that part of the world.  Little Longmead, Findon.  It was spotless, the best equipped holiday home we have ever been to.  The owner lives next door and is very friendly and helpful.  How is this for a view from the back garden?  It was very peaceful. 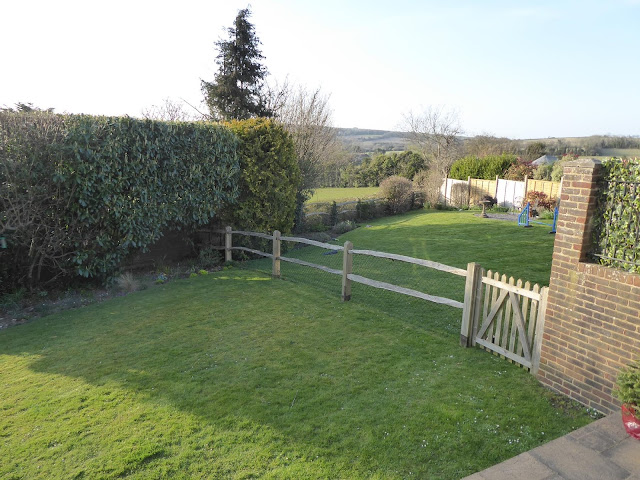 We had no plans for Saturday and Sunday, so on the former we decided to pop to Worthing to find a sea front café for a spot of lunch - not a hope as we could not find a car parking space for love nor money, so we ended up at a M&S café - not quite what we had planned.

Sunday we went to the RSPB reserve, Pulborough - a much better option for a gentle very peaceful stroll and a quiet sandwich enjoyed in the sun with a wonderful view. 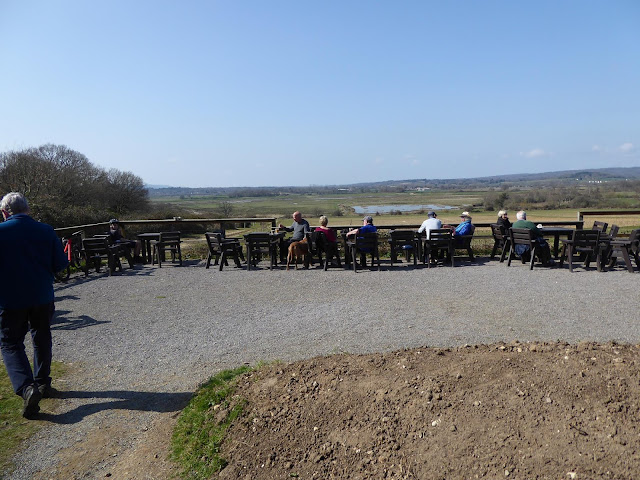 We did drive up to see our old house, which has changed a bit, as you would expect in 10 years.

We came away with the feeling that we were so glad we moved to Worcestershire when we did.  The number of new houses (and in one case a whole new village) was unbelievable.  Also the traffic was pretty dire and the countryside not as nice as where we are now.  The week was definitely a great success as we both caught up with the people we intended to meet and I even had lunch by the sea in Goring by Sea (Sea Lane Café - which I can recommend) with a couple of my friends. 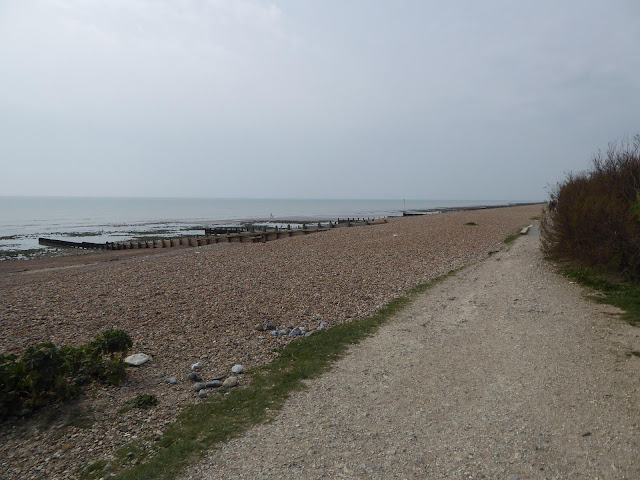 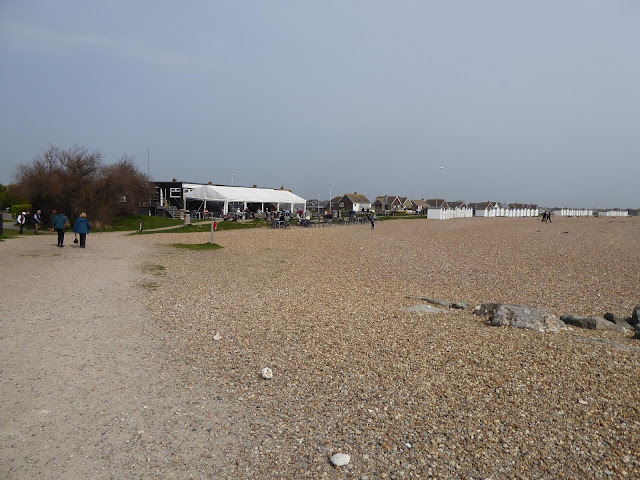 Just after we got home I had a cataract operation on my left eye and oh my goodness, what a difference.  Even though that was my better eye sight wise, I now find I can do most things without glasses.  For very small print I have an old pair of glasses with just one lens for the right eye or a magnifying glass.  The right eye will be done on 4th July.  Hopefully, four weeks after that I will be able to drive again - for now I am being chauffeur driven.

We have had a landscape gardener in to make our rather dull garden look a little better now we are here most of the time.  My favourite part is the raised bed for herbs (and a few strawberry plants) made from reclaimed cobbles. 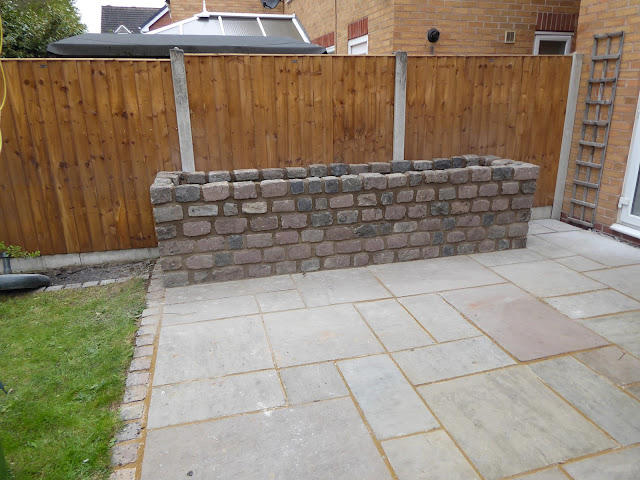 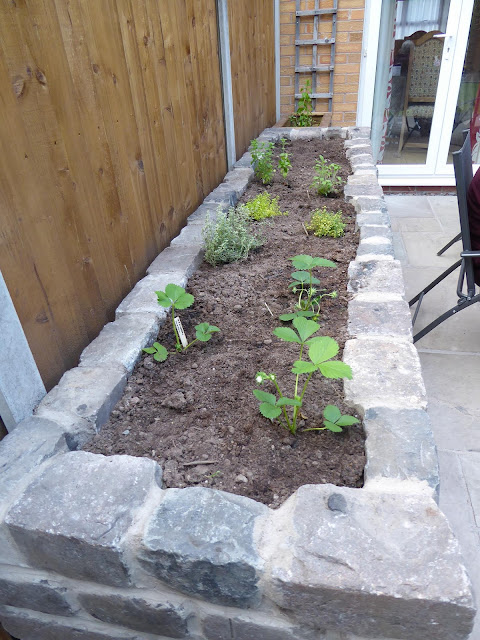 We also have a couple of troughs for mint and tomatoes 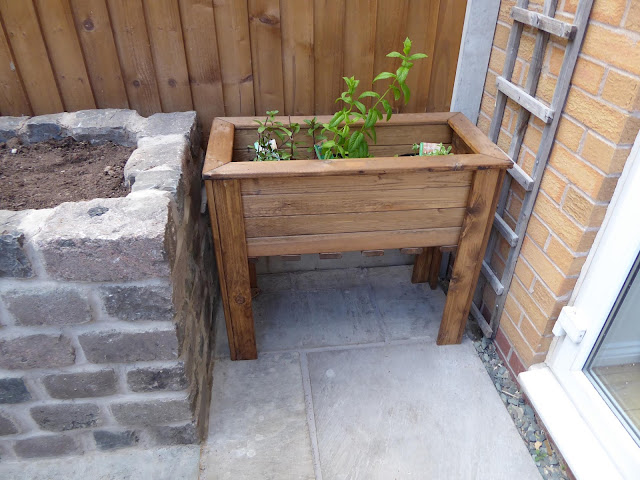 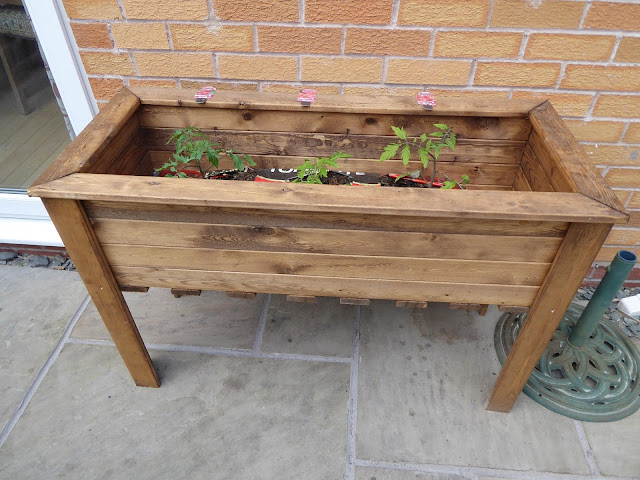 We made a brief appearance at St Richard's Festival in Droitwich.  The weather was glorious on the day we went and after our couple of hours serving on the Worcester, Birmingham and Droitwich Canal Society Stall

we were able to wander around and enjoy a beer in the sun.  It was so good to see so many people out enjoying themselves again after a two year gap. 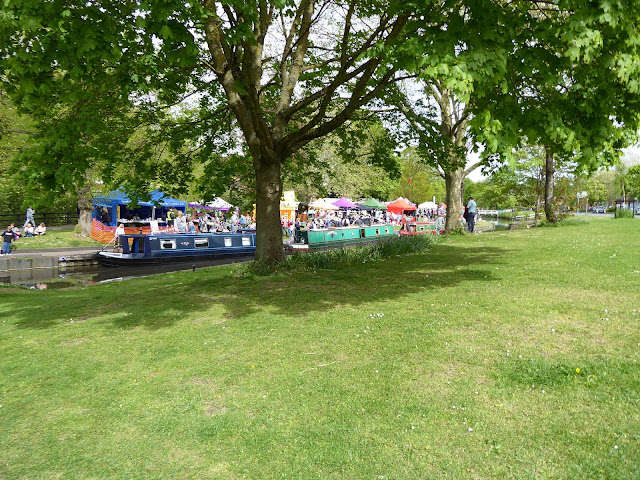 On the May Bank Holiday Monday, I went to a tulip festival at Morton Hall, Redditch with a friend.  It was well worth the visit which we ended with a rather fine light lunch. 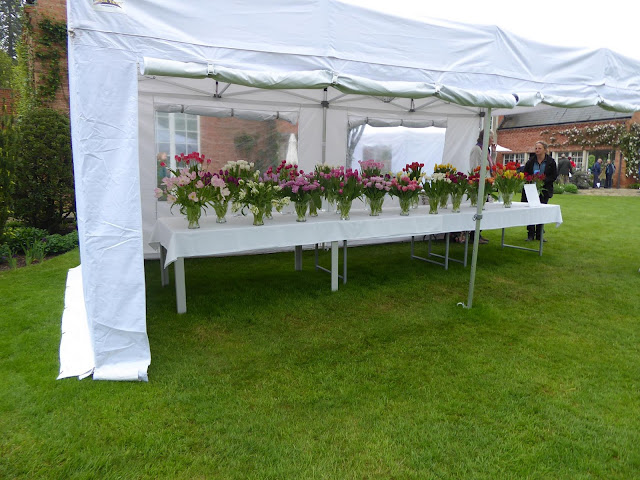 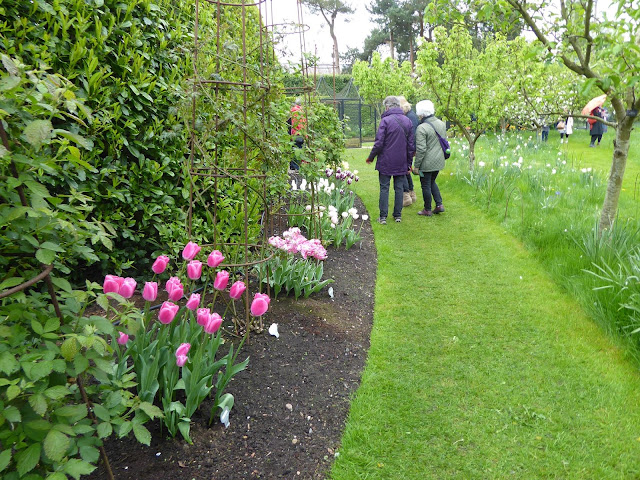 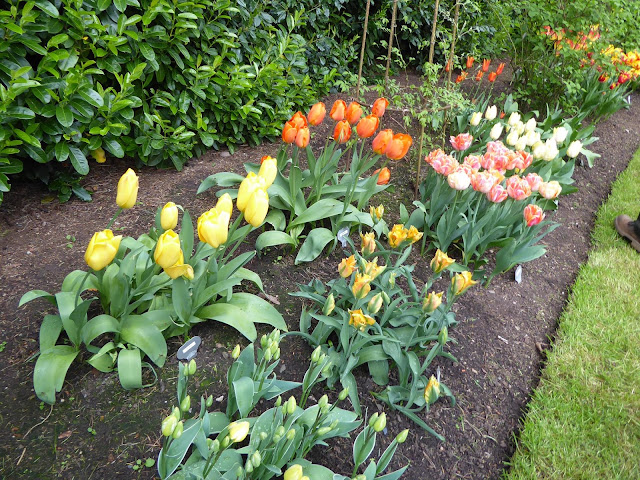 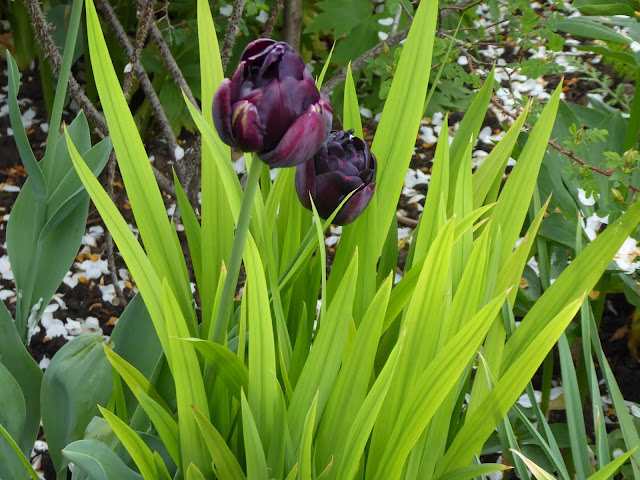 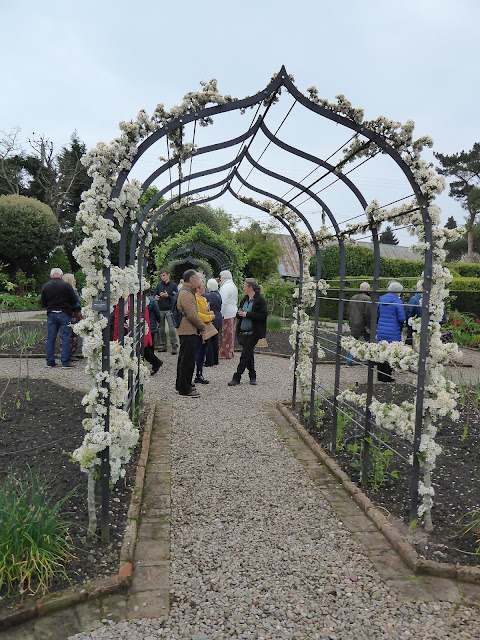 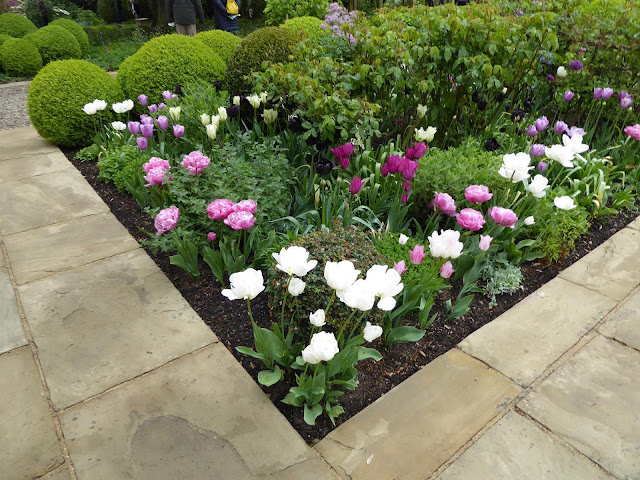 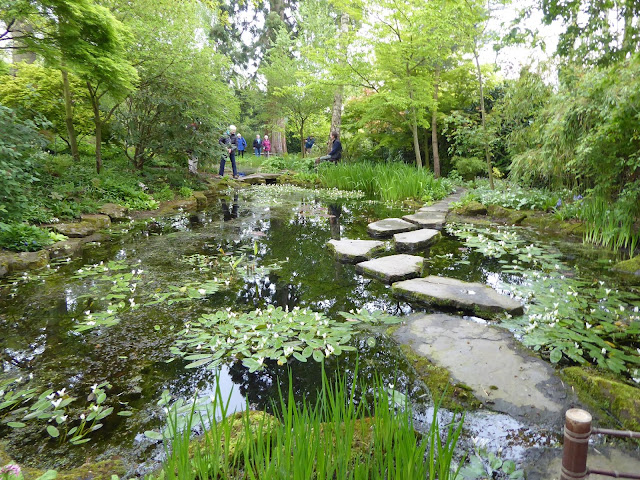 All profits go to the RSC and they had a few costumes on display.  I think the crew of nb Cleddau will recognise this rather magnificent outfit from a recent production of Much Ado About Nothing. 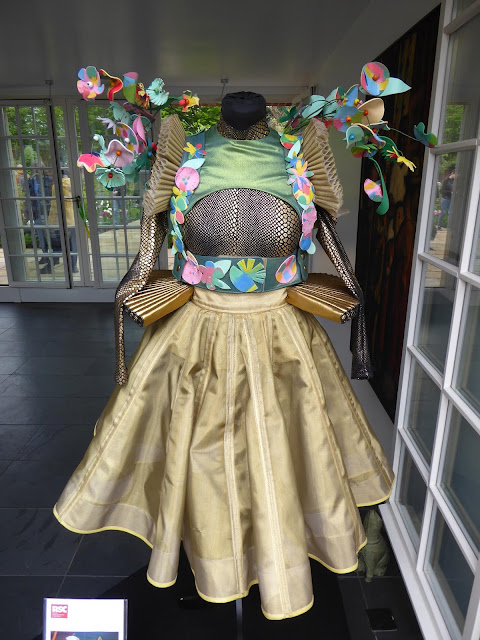 This morning we drove out to Droitwich to walk along the canal to witness the sad sight of a boat that had been sunk in a lock.  It is a long story of three boats hired by a Stag Party which ended up with two of the boats being abandoned and the third sunk.  I gather that they were moving after dark and tried to go down a staircase lock around 10pm.  The paddle on the offside is always locked.  They, however, failed to check the other side, assumed they were stuck, so went to bed.  The boat drifted backwards onto the cill, the water leaked out of the lock and the boat sunk.  They woke at an awkward angle and had to be rescued by the fire brigade.  RCR and C&RT were in attendance when we were there. 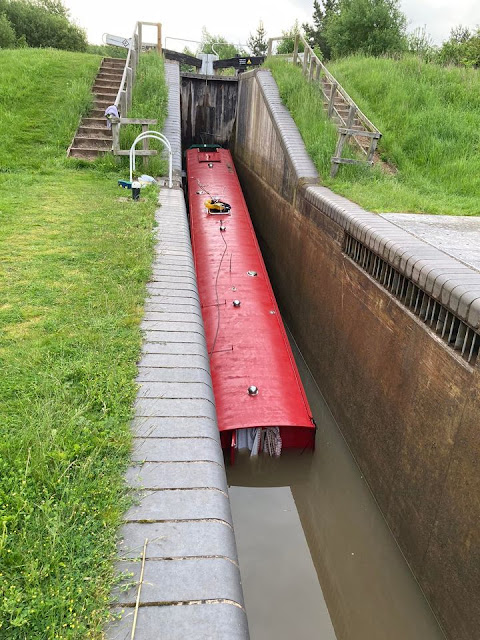 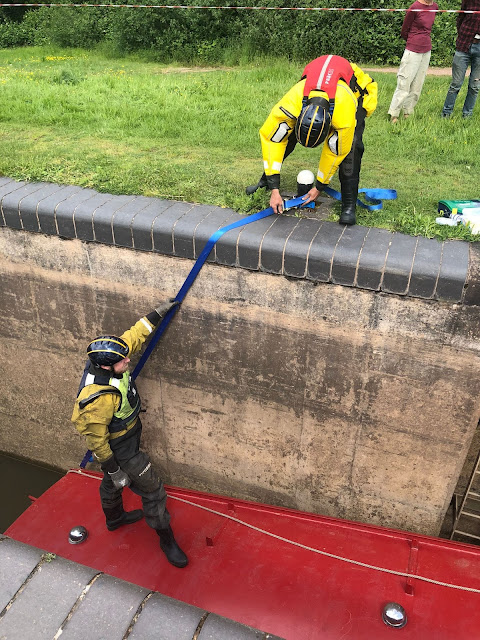 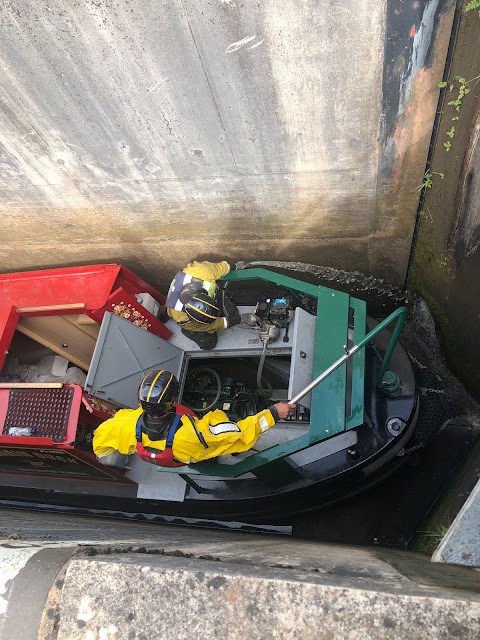 Fortunately the only casualty is unlikely to complain, but I hope someone fishes her out before she ends up round someone's prop! 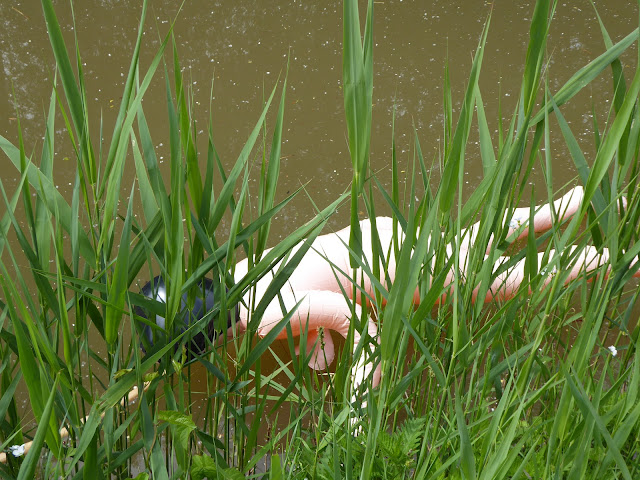