The Final Chapter of the Summer 2014 Cruise!

Although we have not moved for months this really was the final leg of our summer cruise of 2014, rather than the start of 2015.  Tentatrice has been with Pinder’s since the end of September.  First for bottom blacking at the top of the Tarbebigge flight .  We then moved down the Tardebigge and Stoke Flights in October and she stayed at Pinder’s works at Stoke until today.  We had just a few little jobs and one big one to be done.  The little ones were done soon after she arrived – all aimed at making life a bit easier:

2 new shelves in the galley 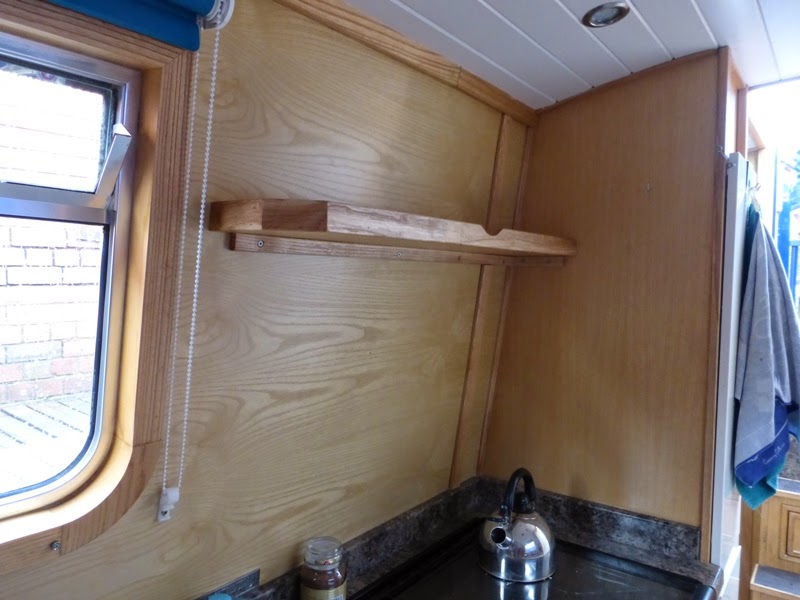 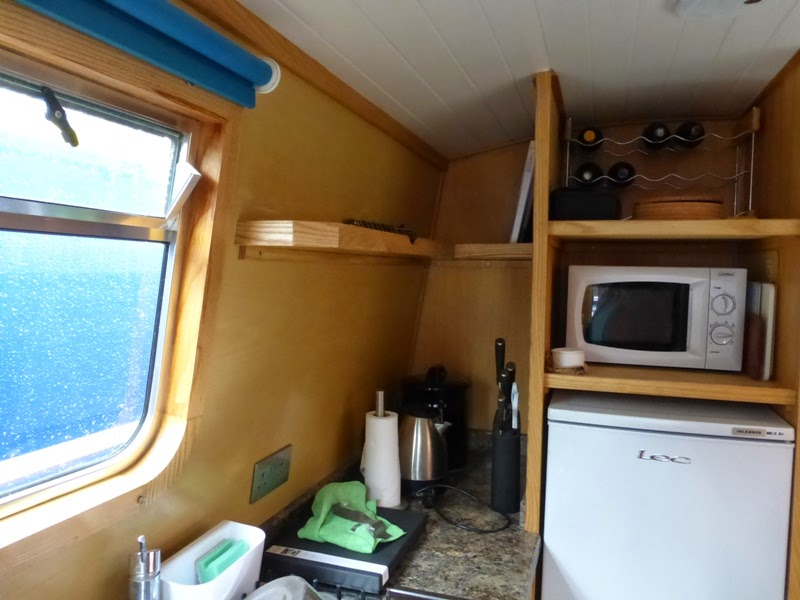 Repositioning of the bow thruster control- It used to be down the far side of this box where the blank plate it now – by the time we (well me in particular) had moved forward, bent over, applied two fingers to switch it on, selected port or starboard and moved back to resume steering we were often over the other side of the cut!! 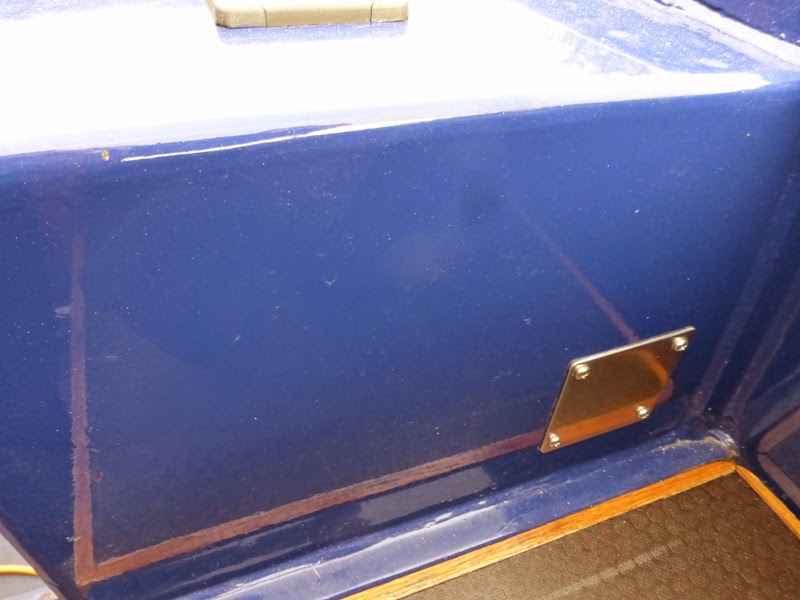 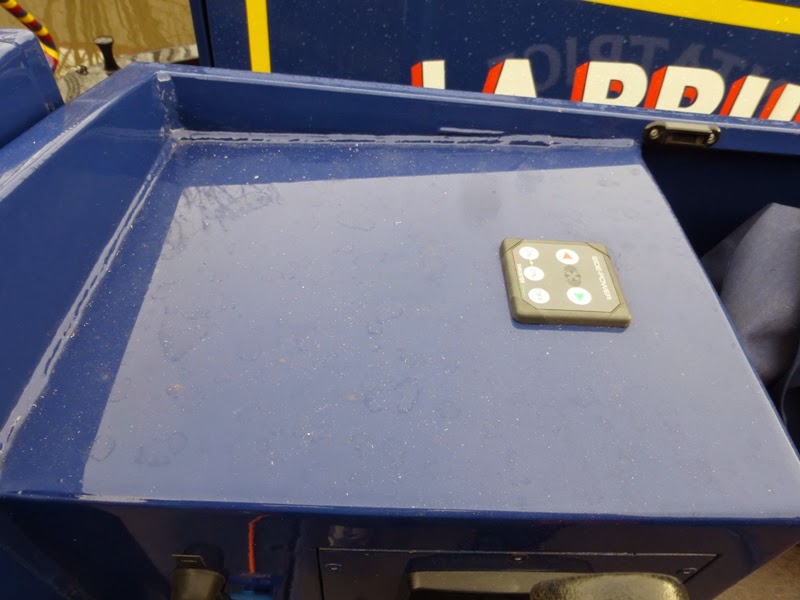 The end of the bed used to be one big drawer, but it took two to open it, so we asked them to split it into two 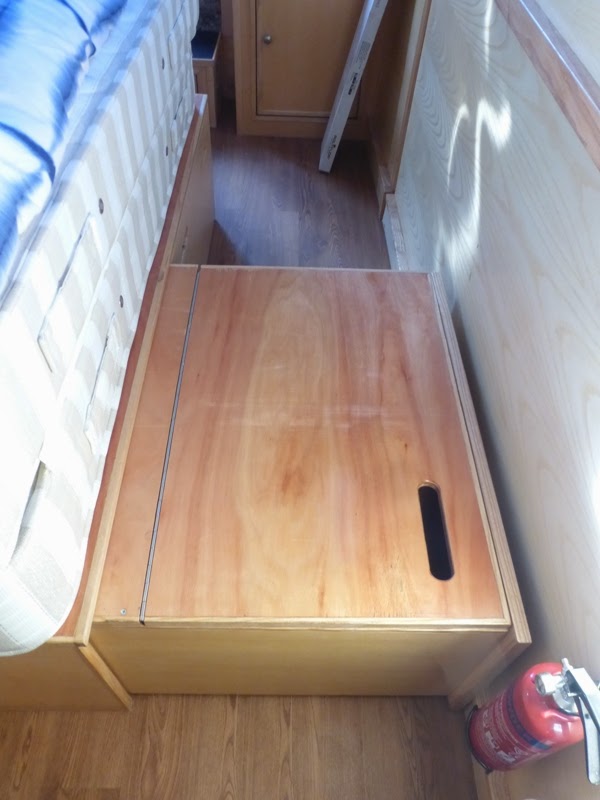 The water tank filler used to be accessed from inside the locker which often got wet when we filled up, but more importantly it was also a pain to keep the lid propped open whilst we were filling with water and made it hard to get on and off the bow. 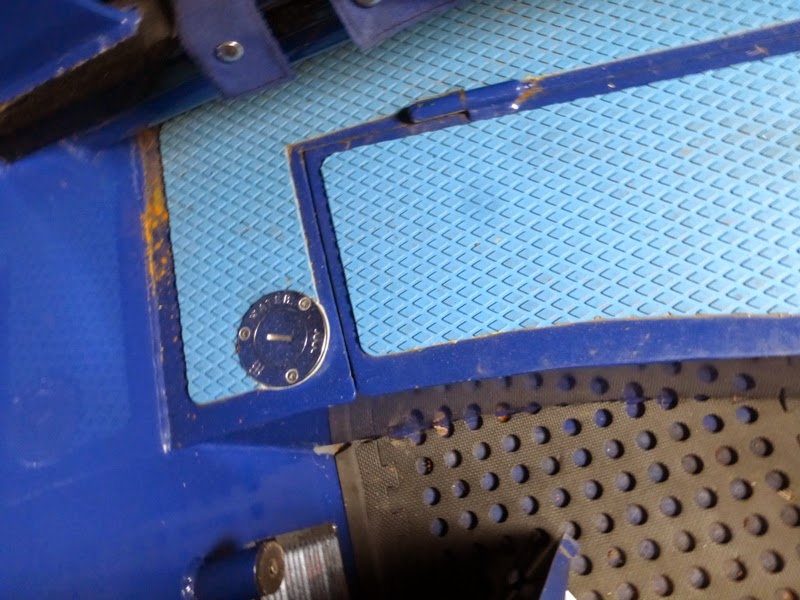 An extra ‘hole’ in the floor for the table legs – this will allow us to erect one of the tables at the end of the dinette for use with the computer without having to have wires trailing around all over the place – it will also make a better side table for a cuppa (or something stronger!!). 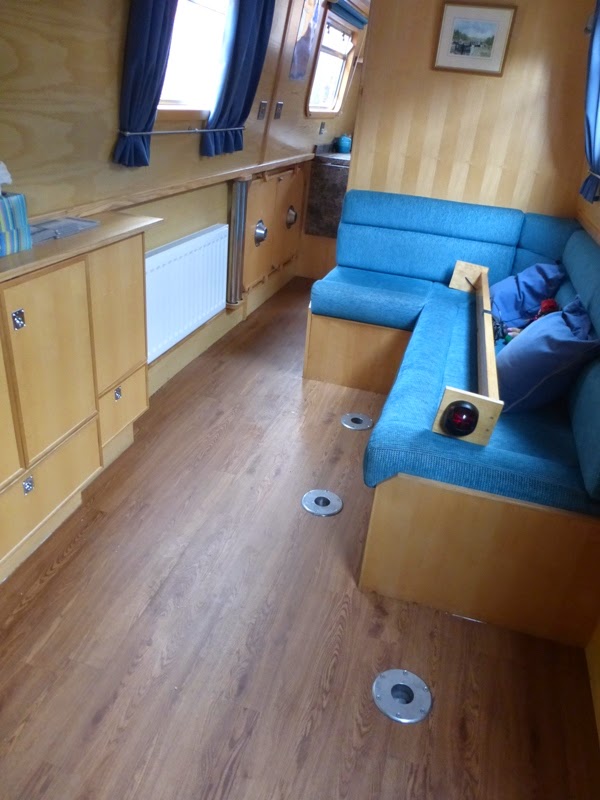 The final big job was the floor (see above for the new floor) – we made a big mistake choosing non slip vinyl which seemed such a good idea at the time and it certainly was non slip for Monty, however it was very hard to clean (hands and knees and a scrubbing brush was all too common an occurrence) and worse still (and the reason we changed the floor) it was too soft and after one season we had three holes in it.  Pinder’s had a lot of work on (they still have) and needed to wait until after Christmas before starting this job.  As they had the space to keep Tentatrice, there was no point in moving her just to bring her back again.  We are delighted with the new floor – it looks good, is a lot harder and we hope it will be easier to clean.  It is in planks, so if we do have a disaster we have a few spares.  Monty slips a lot, but he is used to hard slippery floors at home and will soon learn to ‘walk, not run’!!  If we had had a pound for every time we told our son that when he was small it would probably have paid for the boat!!

So to the final leg of our trip.  This is us already to go: 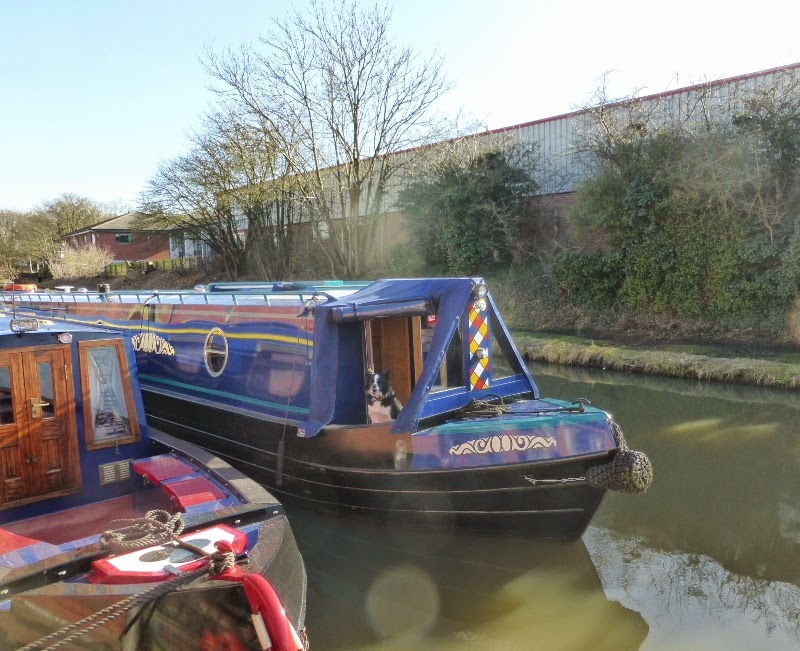 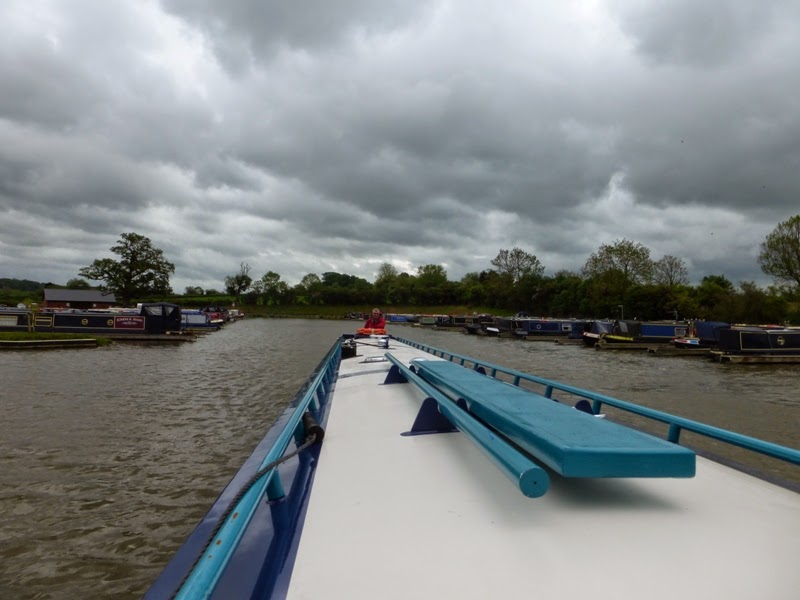 It was not long before the heavens opened and stayed that way for two days whilst we tackled the 45 locks to the top of Tardebigge! 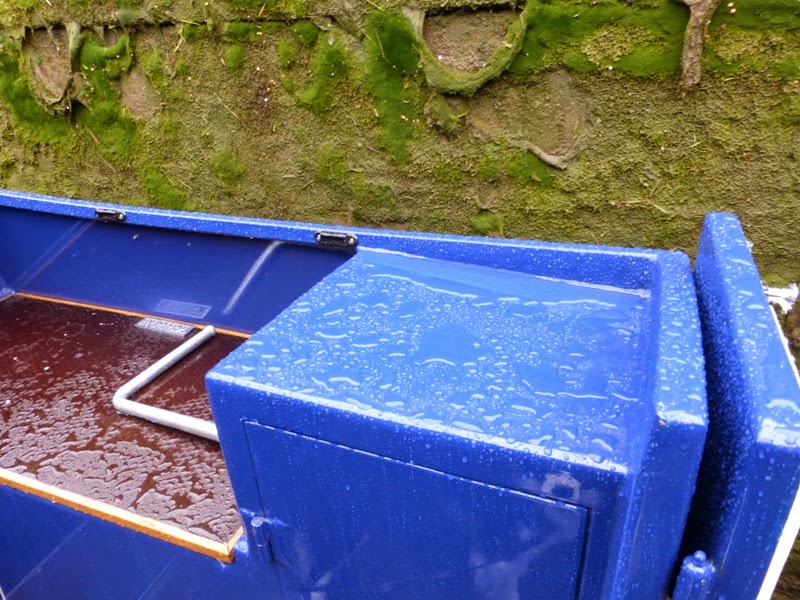 He was not happy!! 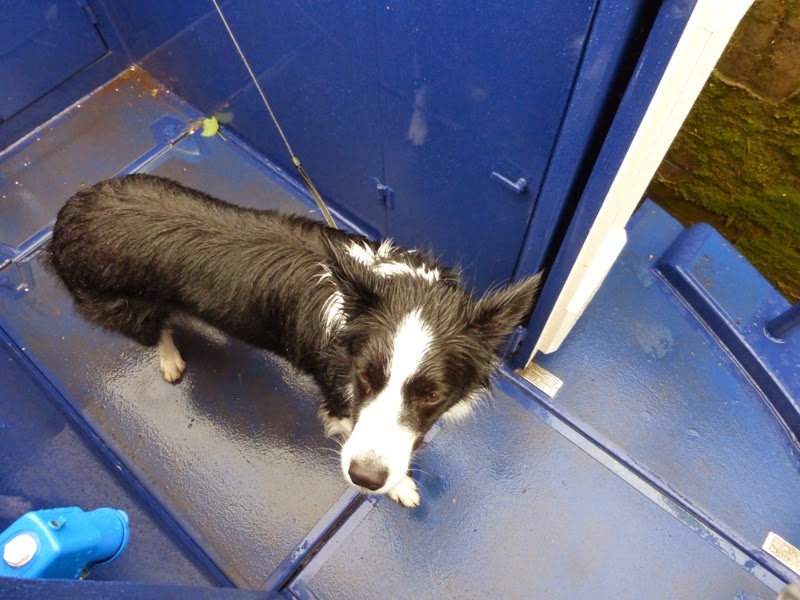 Also note the 'winter hat' and many layers worn last May 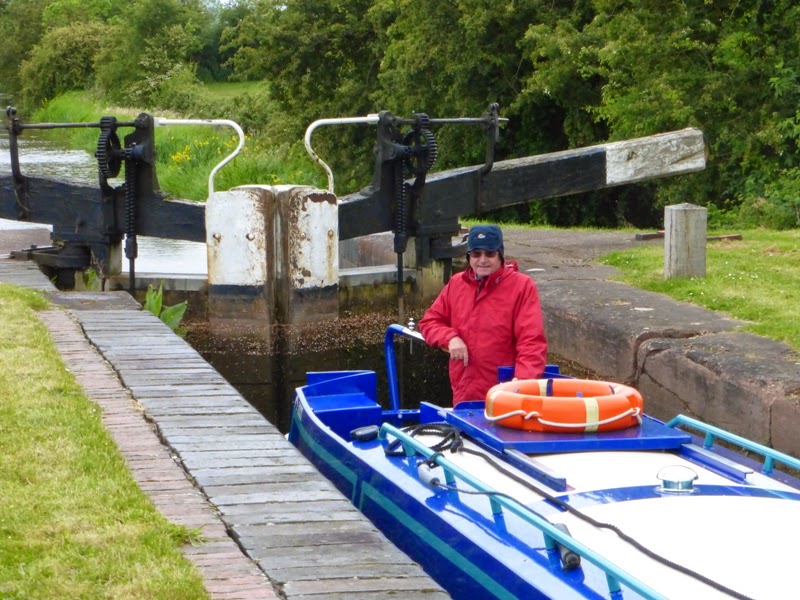 Our daughter helped us on the second day whilst we went up the Tardebigge flight and she got so wet, she went through two sets of clothes 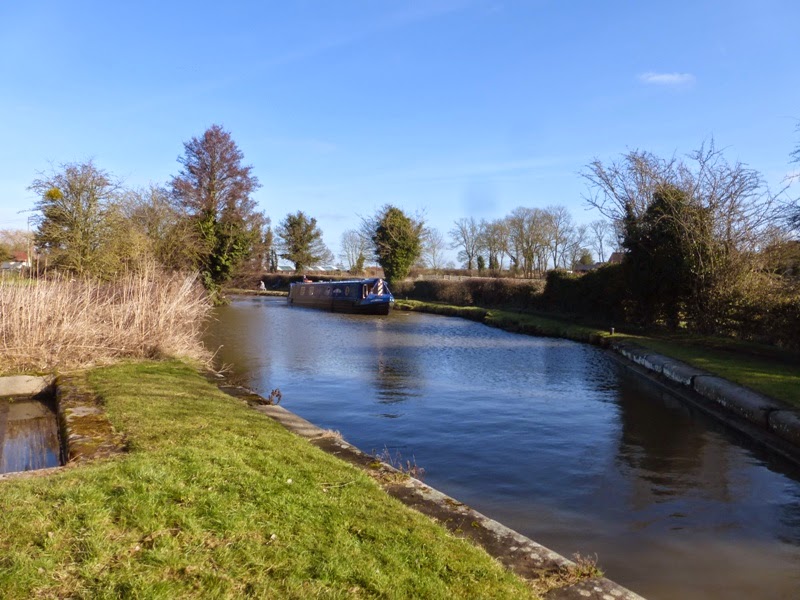 Warm clothes were still needed, but not the waterproof lined hat 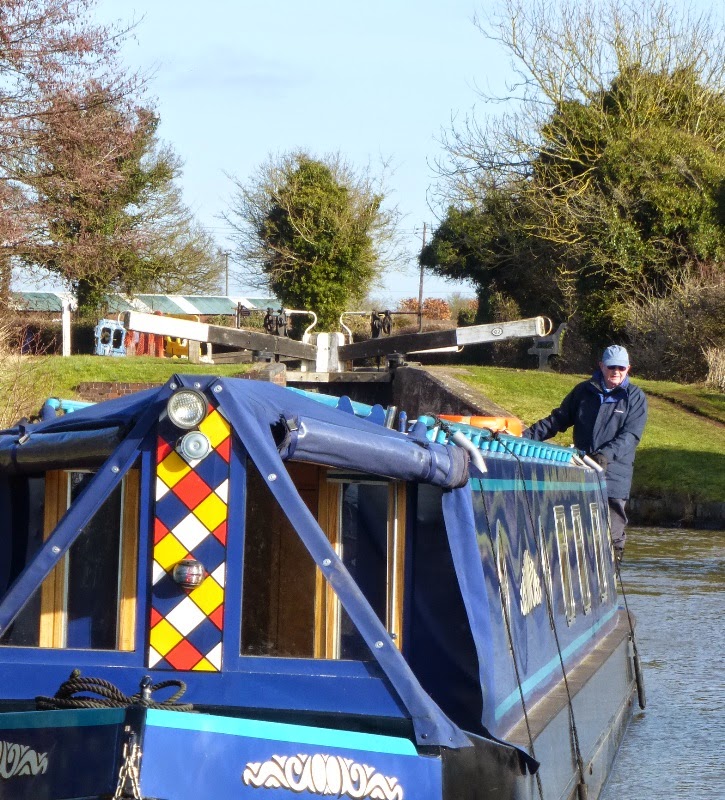 It was a really wonderful cruise and all too short.  We got through the 6 locks at Astwood in really good time.  There is a very pretty cottage at lock 19 that has a stunning garden through the spring, summer and autumn.  Today it was flying an array of flags (shame about the washing!). 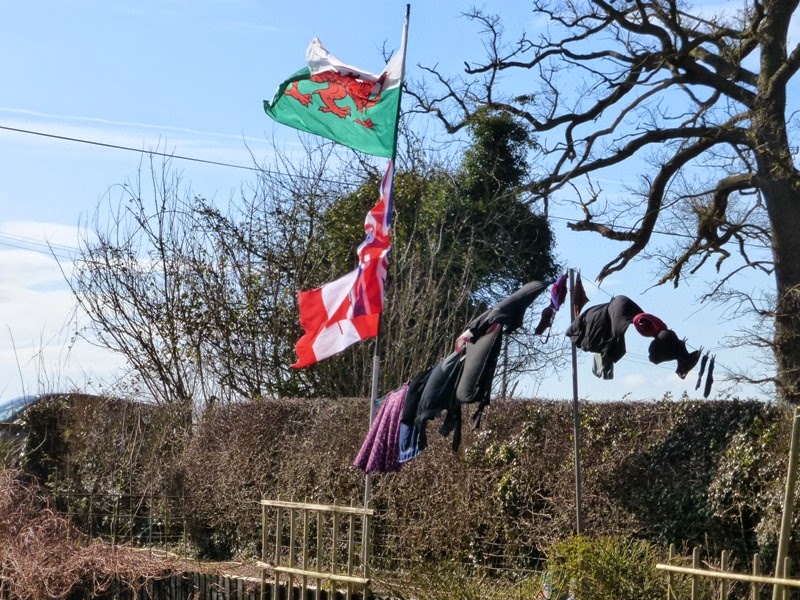 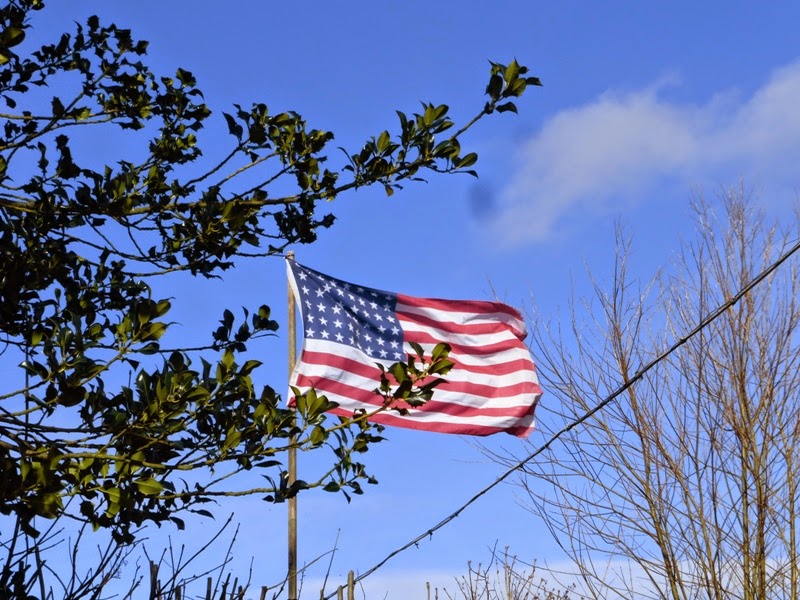 Monty had not forgotten how to supervise locking duties. 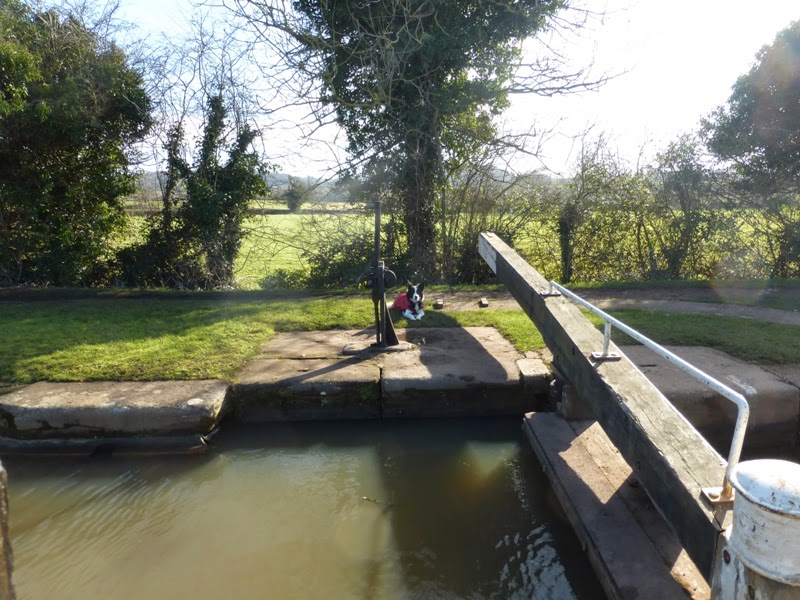 He was wearing his coat to protect his back where he had a lump removed just under two weeks ago. I am glad to say the lump was benign and the scar is healing well. 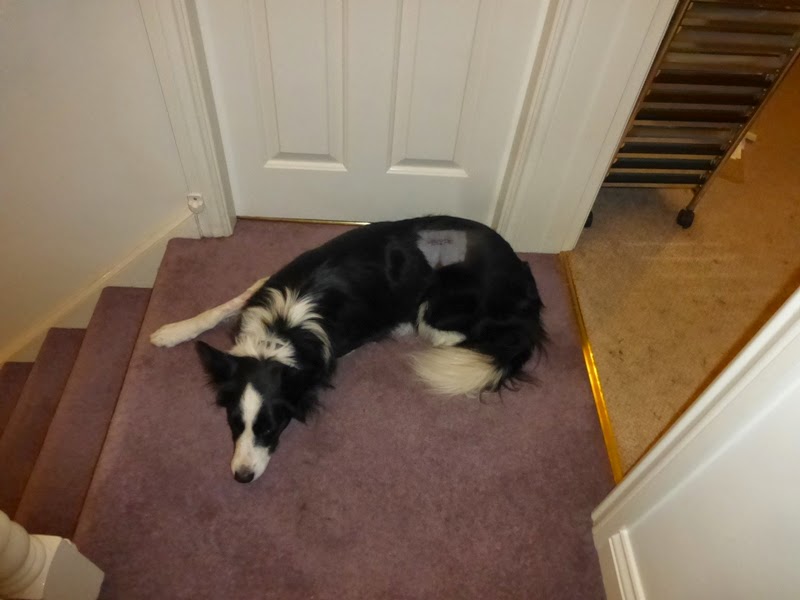 The three locks at Hanbury are the final leg and we were very lucky to find one of the C&RT employees that we know from our litter picking and lock keeping duties there.  He offered to help us through and we never turn down offers of help!  It was a lovely day, but he is a hardy and brave soul to be sporting a t-shirt!! 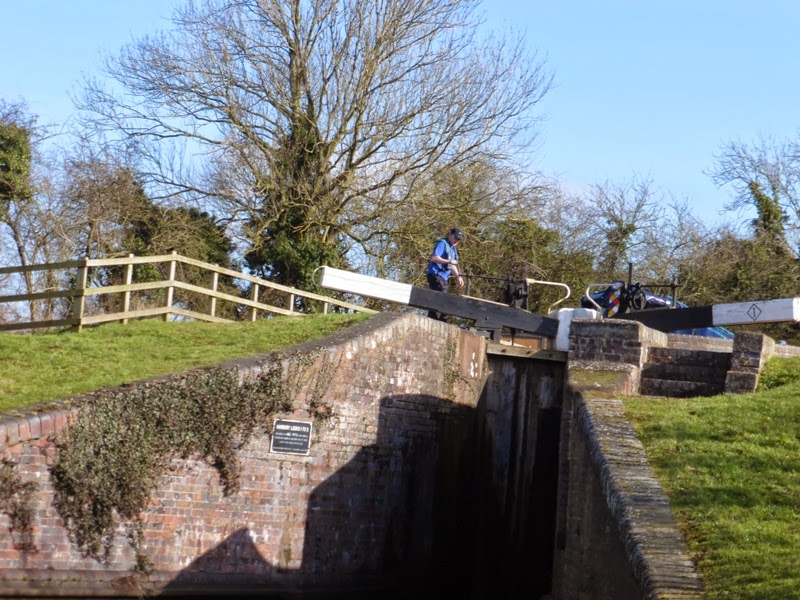 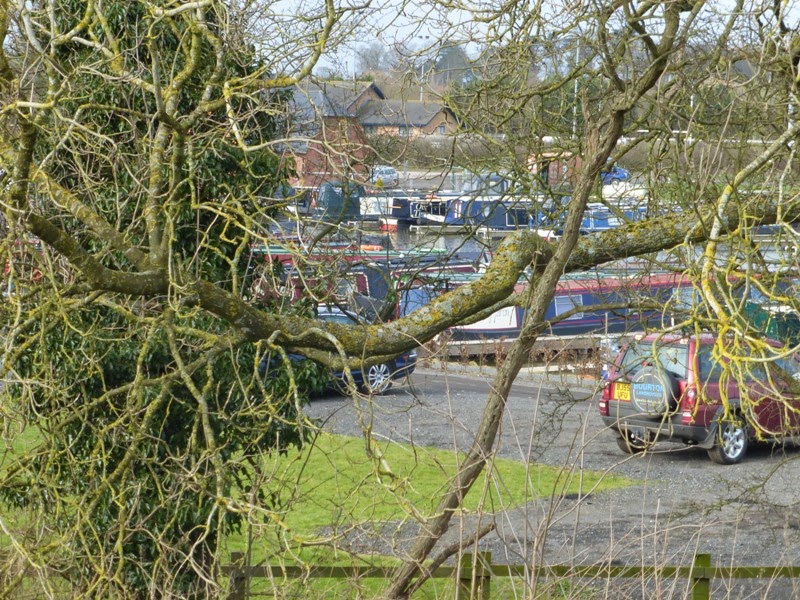 Once through the 'Hanbury three' it is a right turn and we were back in the marina.  When we left last May they were just starting to build the new office block 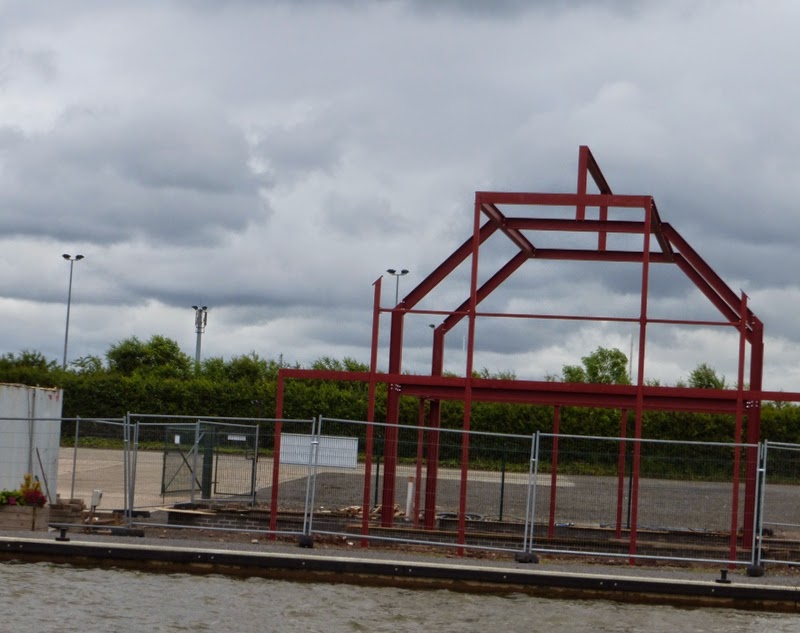 Now it is almost finished 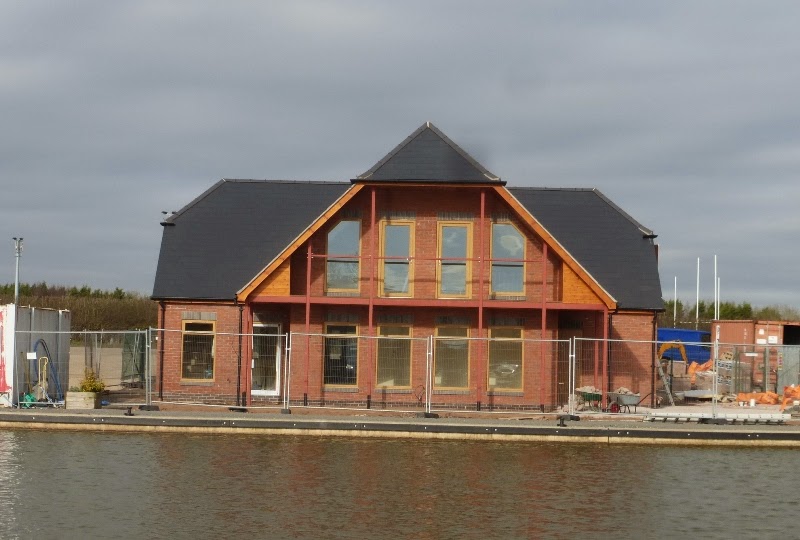 I have just noticed that the sky looks a bit grey - we must have finished our short cruise at an opportune moment! 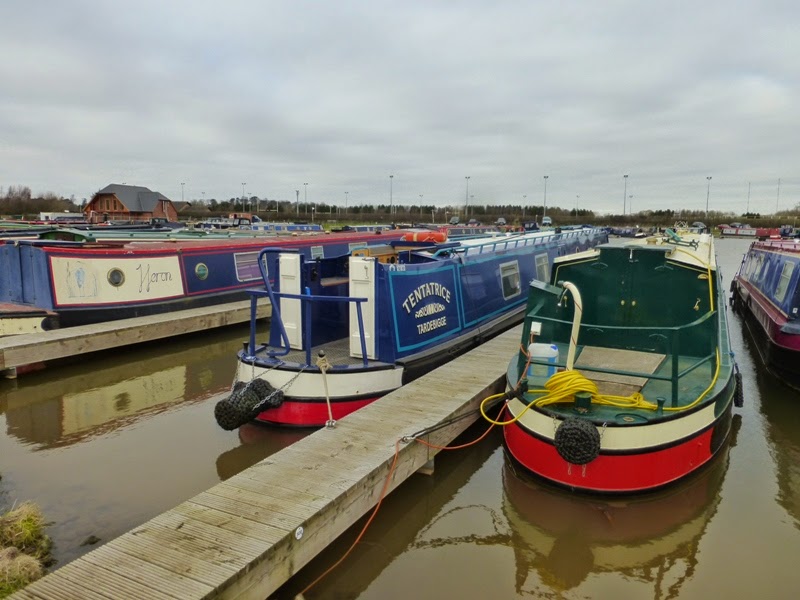 I know when Jaq and Les were at Cowroast Marina they felt very hemmed in.  I was sure we had more space between the boats in this marina, but I don't think we do and I don't think the pontoons are any wider, however, I have never felt constricted here.  I think it must be because the marina is so large and there is so much open space.  Mind you we have never had to live here.  The good news for the marina is that they are now full, but it is bad news for us - we had to decide whether pay for the year or risk no mooring availability next autumn when we come back again.  We wimped out took the former course, so having paid Pinder's and the annual mooring fees our bank account is feeling the pinch!

It was wonderful to be afloat again.  We have a lot of deep cleaning to do and re-stocking of the boat, but that will wait for a week or two - we are off to Pembroke for a week from 28th February with Sue and Ken from nb Cleddau.  We will be taking our water proofs, boots and winter walking trousers!

Finally the stats for those who like these things (that would be me then!) of our summer cruise: