The bottom blacking went to plan.  The other job to be done was a service on the Eberspacher - remember this photo taken on the Braunston flight - it was definitely not working as it should have been: 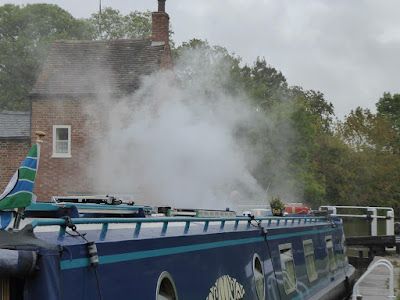 Sadly it was deemed terminal, so a new one had to be fitted.  We are still awaiting the bill!

The journey back to the marina was to be very much a family affair.

Saturday was a really wet and miserable day so it was a relief to find a dry and relatively warm day dawning on Sunday.  Our daughter in law (Jo) and her three children (Molly, Noah and Evelyn) had arrived on Saturday to spend the first part of half term with us whilst Daddy was left at home to 'bring home the bacon'.

Chris and I moved the boat from outside the dry dock to the water point at Tardebigge New Wharf.  The plan had been to load the boat from the cars - there was quite a bit of stuff with four of sleeping overnight, 6 for lunch on Sunday and 9 on Monday).  Jo and I were then going to leave Chris on the water point (it is not a busy one) whilst we pre-positioned a car at the Queen's Head,  So far, so good until someone came along needing water!  We left Molly with Chris to help move the boat across the cut and moor up.

As soon as we got back we joined them and headed for the first lock hoping for a couple of minutes to get ourselves prepared.  Sadly that did not work either as a boat loomed up behind us, so we had to go.  Sandwiches were made very speedily during the 700 metre transit from lock 58 to 57.  Then it was all hands on deck and go for it until we reached the bottom lock.

Just a few pictures to mark the day 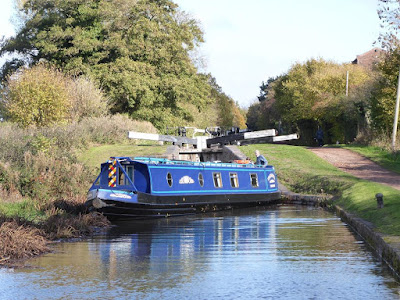 After all that exertion we all slept well.

Once Jo and Molly arrived back at the boat we set off for the Stoke flight of 6.  Someone was smiling on us as it was dry again - a little chillier, but definitely no wet stuff.  Sarah, George and Jamie were dropped at the bottom of the Stoke flight by Paul,  having pre-positioned a car at the marina - they did ensure they brought the car keys with them! They walked up to meet us, 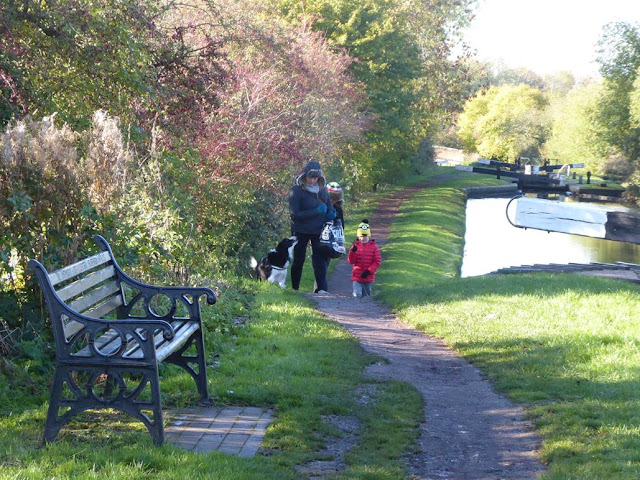 so we had 9 pairs of hands to help with the locking!  A few too many in some ways, however, as Noah said, it made a great fun family day out.

Many hands really did make light work and with very few boats on the move we had an easy run. 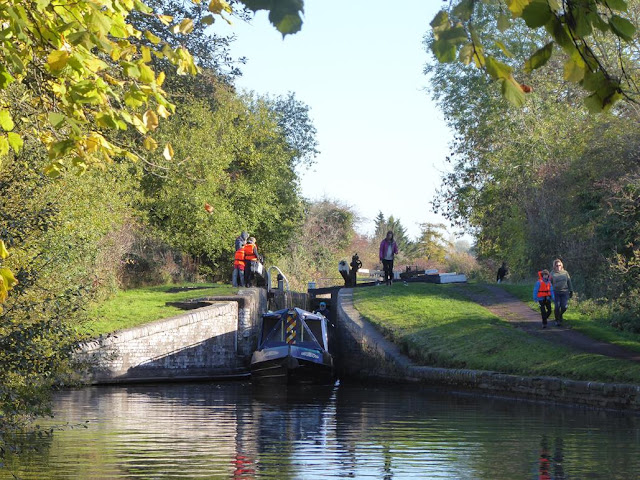 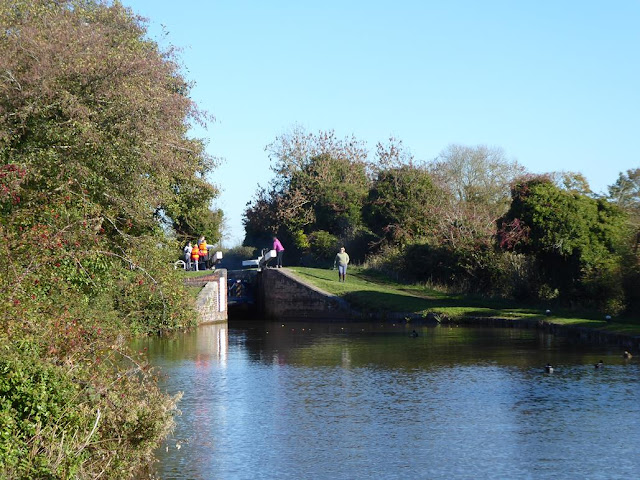 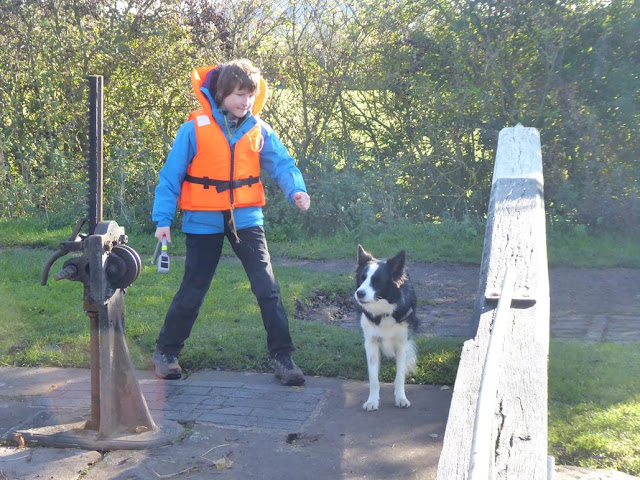 We motored on to Hanbury Turn where we pulled over and moored up to have a well earned lunch
After lunch it was a quick right turn on to the Droitwich Canal and the last three locks at Hanbury.  There were two volunteer lock keepers on hand to teach the children how to operate side ponds. 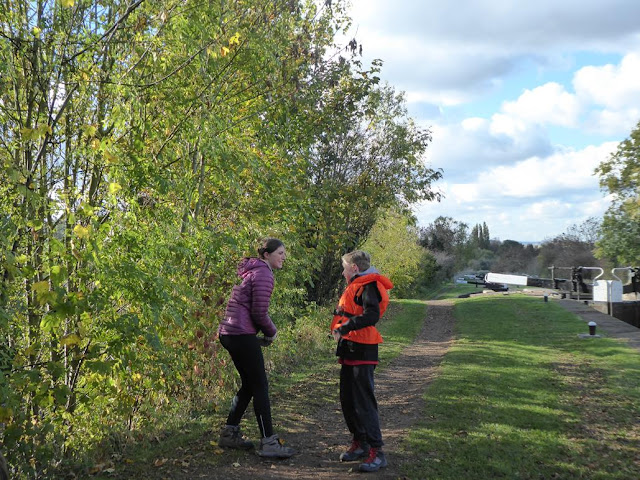 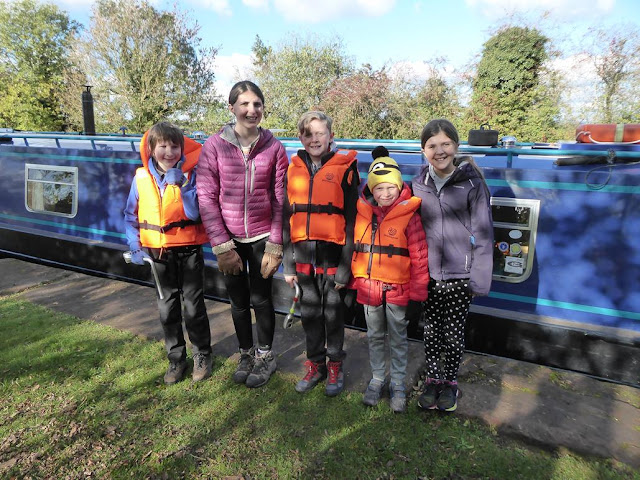 Volunteer lock keepers can turn their hands to a multitude of tasks including acting as a photographer to capture our rather large party of lock hands plus the helmsman!  We are always grateful for any help we get along the way. 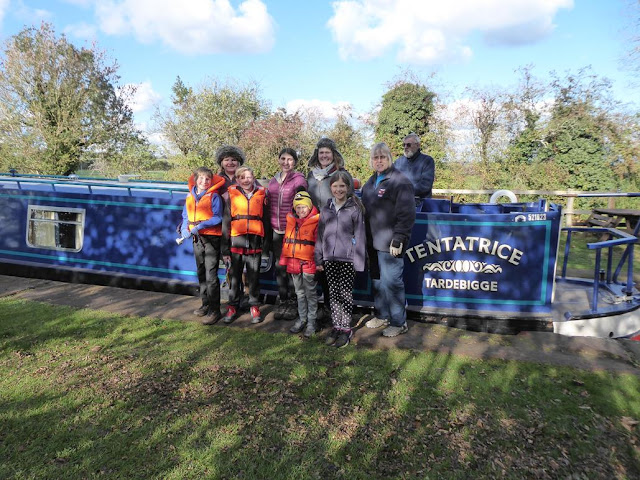 First stop in the marina was to fill up with diesel, so we have a full tank for the winter.  Sarah drove Jo and I back to the Queen's Head to retrieve our cars whilst Molly helped Chris to return Tentatrice to her mooring where she will stay until at least March.

Once Jo and I returned with the car we loaded up and headed home for a busy half term week as you will see in the next post.  We will return in due course to do some much needed cleaning (10 pairs of feet leave a lot to be desired!), retrieve the bedding for a wash before storage and the composting loo for its annual deep clean. We have other jobs to do over the winter, but our first priority after half term is getting the house ready for a decorator - a good time to have a much needed clear out.

It was a great fun two days - a journey we could have done on our own, but it is so much better with company.  Thank you all for your help.