Sue and Ken (Boatwif and The Captain from nb Cleddau) arrived mid afternoon to find we were 'nursing' a sick grandson.  Thankfully it was something and nothing and he was fit and well enough to go back to school on Tuesday.  The four of us spent a very pleasant evening together with good food and glass or two of wine.  We had a lot to catch up on.

We set off for our local NT property (Hanbury Hall) mid morning. 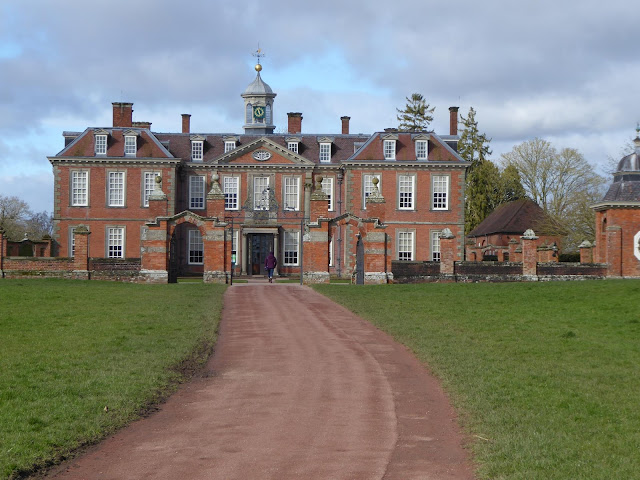 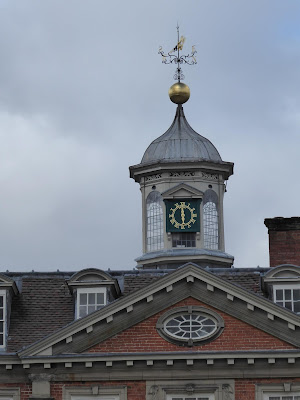 It was a first visit for Sue and Ken, so they went to explore the house and formal gardens whilst Chris and I took Monty for a walk and admired the views. 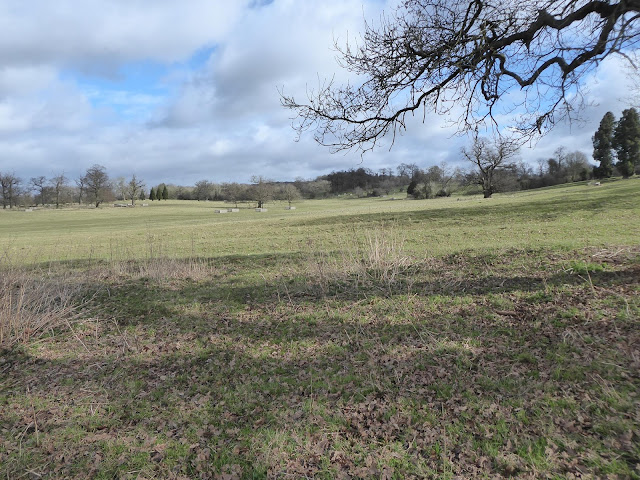 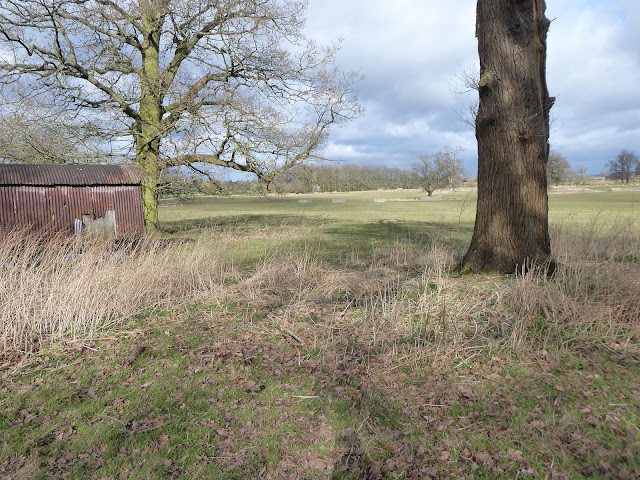 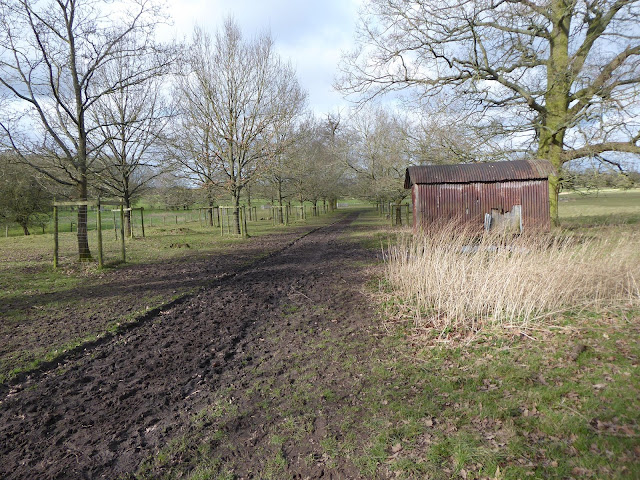 After we returned Monty to the car, we had a very quick peek at a small part of the formal gardens before joining Sue and Ken in the cafe for a light lunch. 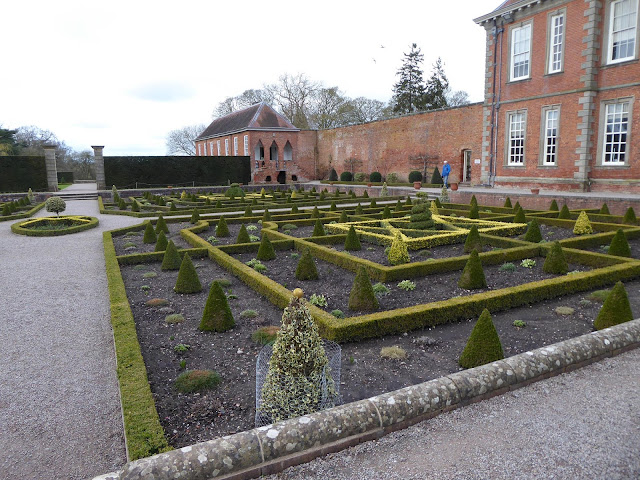 Whilst waiting to join a tour of the house I was rather taken by this splendid peacock.  Sadly the lady who was due to lead the tour had not arrived, so we will just all have to go back again one day.  We made for the car which turned out to be perfect timing as the rain started when we were just a few feet from the car. 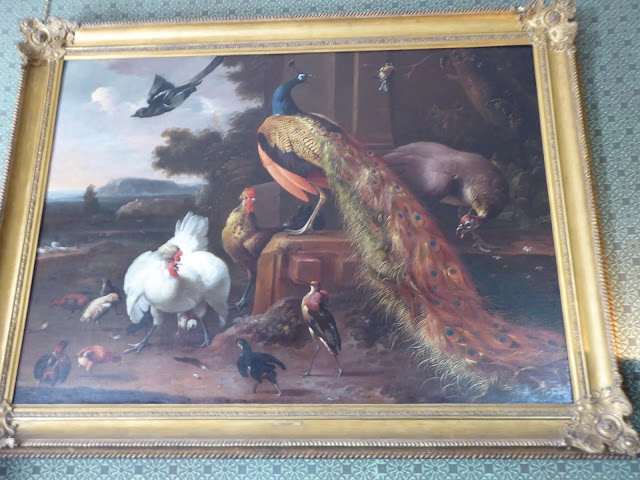 The main reason for Sue and Ken's visit was to attend the Worcester Birmingham and Droitwich Canal Society monthly meeting where the guest speaker was - ME!!

The subject of my talk: 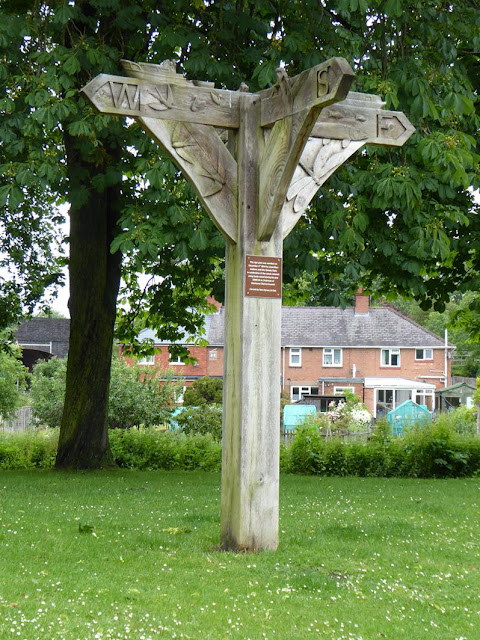 There is, of course, no such thing as the "Droitwich Challenge", but the superb fingerpost in Vines Park (Droitwich) points to the extremities of the canal and river system navigable from Droitwich and did spur us on to go to all of them.  There was a very tense start to the presentation when my laptop, on being switched on, decided it just had to complete a Windows update and nothing we tried stopped it.  All I could do was be thankful we had arrived early and hope it did not take too long.  It made it just in time, but I was also dealt two further mishaps when the laptop froze twice during the presentation each of which required a re-boot!  The annoying thing was that I had run through the entire presentation on the laptop on Monday without a hitch!  Despite all that it seemed to go down well and I hope was enjoyed by all the society members present. Sue and Ken (on Cleddau) accompanied us on the four journeys, north, east, south and west.

Sue and Ken had very kindly 'volunteered' (or were they press ganged?) to help us return our boat from Crafted Boats at Stoke Prior to the marina at Droitwich now all the jobs had been done.  We were up early and on the road by 08:45.  First stop was to load Chris, Monty, hats, coats, gloves and boots etc onto the boat and then Sue, Ken and I delivered our car to the marina before making our way back to Crafted Boats.

The most important job was investigation and repair (we hope) around the chimney as we had sprung a leak.  Second was the installation of two solar panels. 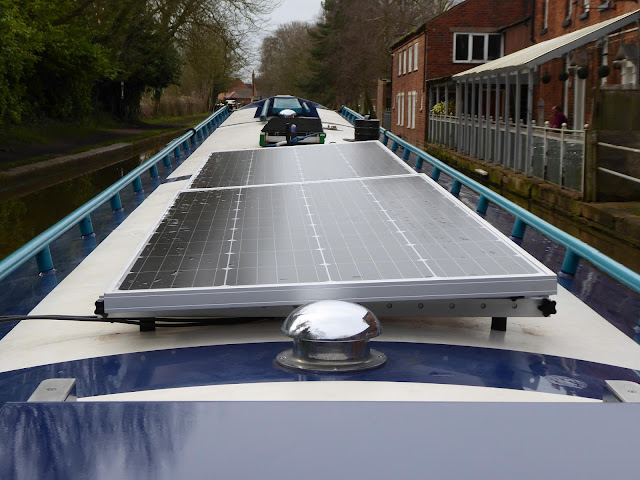 Our original stern hatch had rotten wood on the inside and the top was badly rusted despite constant treatment and repainting.  The rusting was due mainly to the life ring stowage - four large 'spikes' that held the latter in place.  A great idea (plus a good storage solution for 'Monty bags' until the next dog box is found), but water just kept getting trapped under the ring causing many of the rust issues. 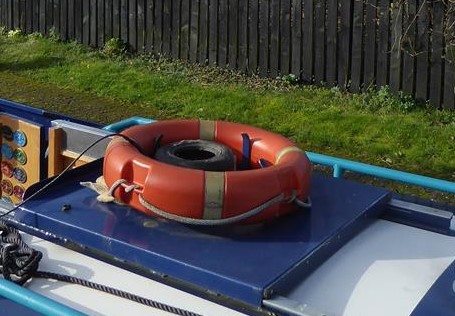 It was eventually decided we would have a new hatch and inner and very smart it looks too. 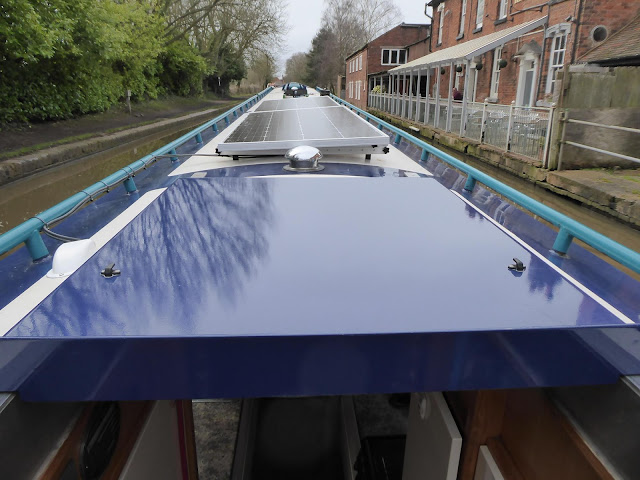 A hook has been added to the stern rail to keep the life ring near at hand in case of need. 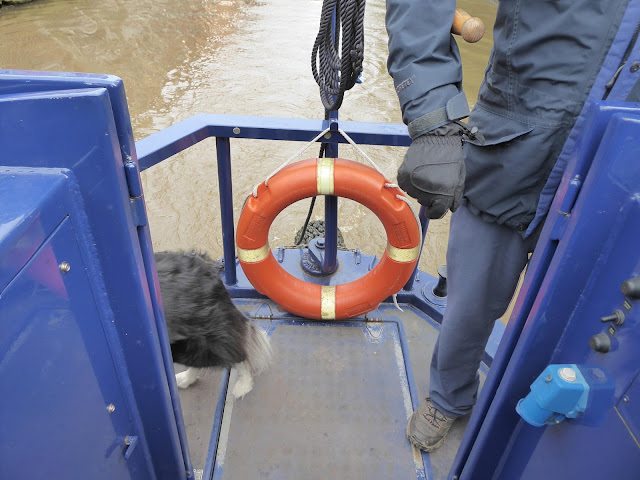 We also had an engine and Eberspacher service, a cupboard door re-attached (a casualty of the Wash crossing) and couple of other bits and bobs done. 10:10 and it was time to set sail.  A straight run through to the top lock at Astwood. 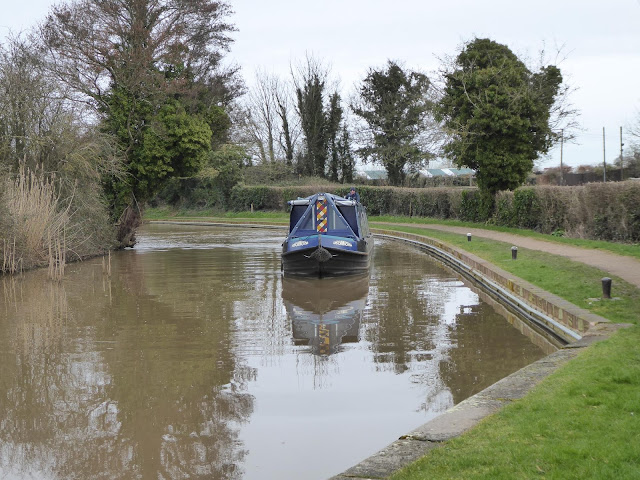 As you would expect with two extra hands we sped down even though all the locks were "set" against us. 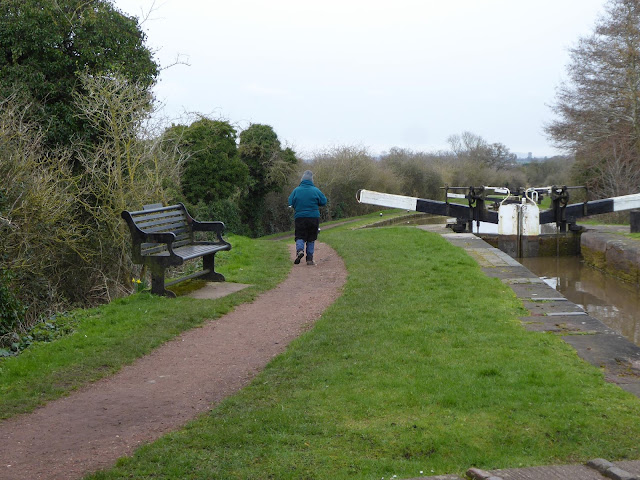 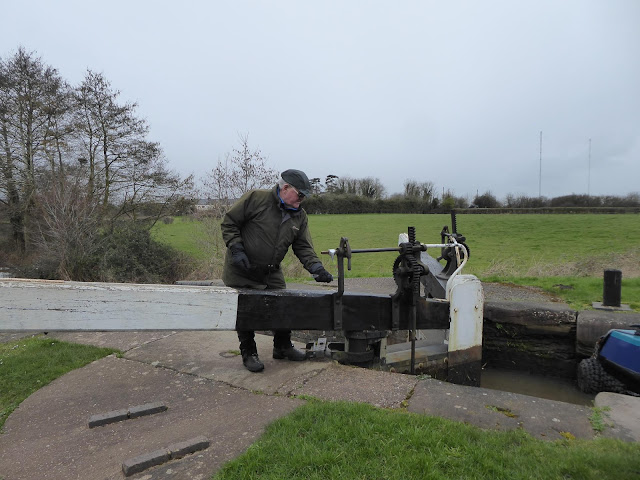 I am sure there is a new gnome at the lock cottage at lock 18, or maybe they are just more visible at this time of year. 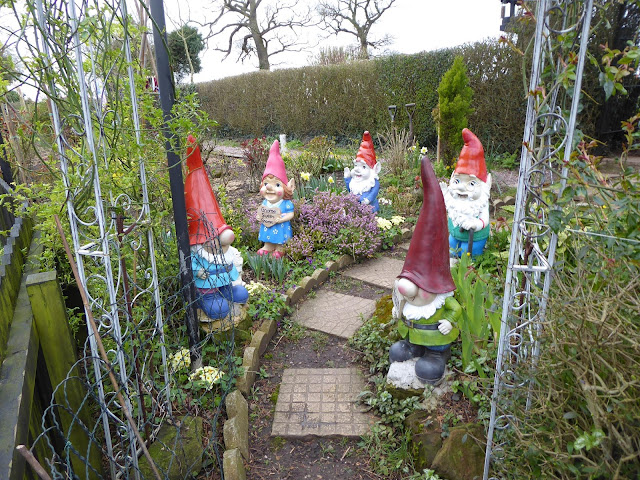 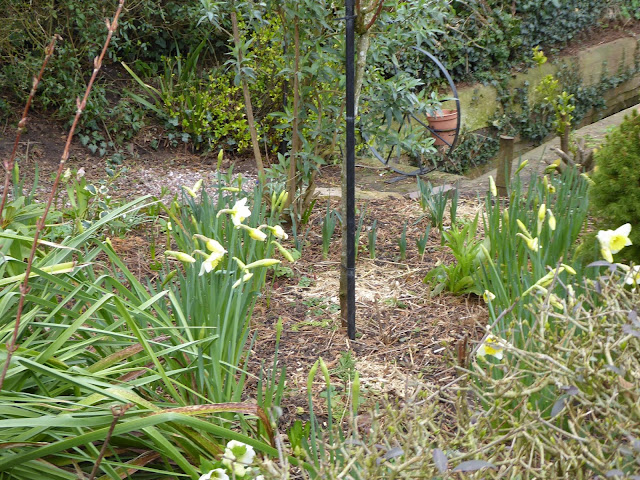 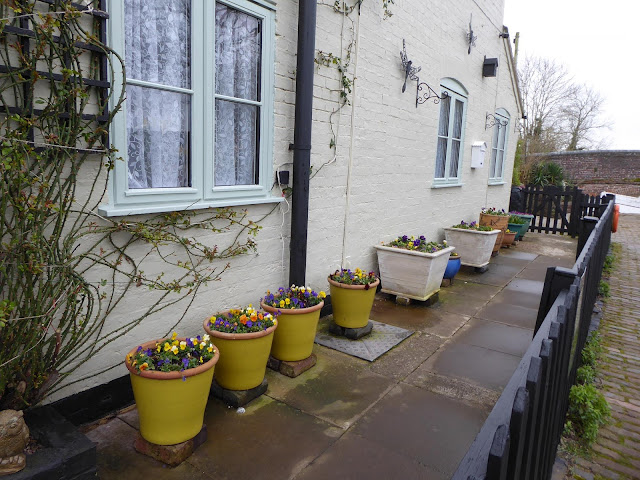 Waiting for the boat to arrive at the bottom lock 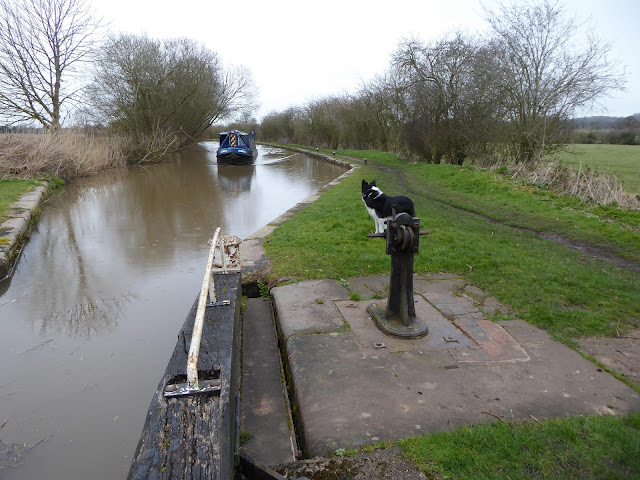 There was time for a much needed cuppa to warm ourselves up before we arrived at the three Hanbury locks.  The side ponds were empty and the pounds were low, but we made it down in safety - full waterproofs were out by this time! 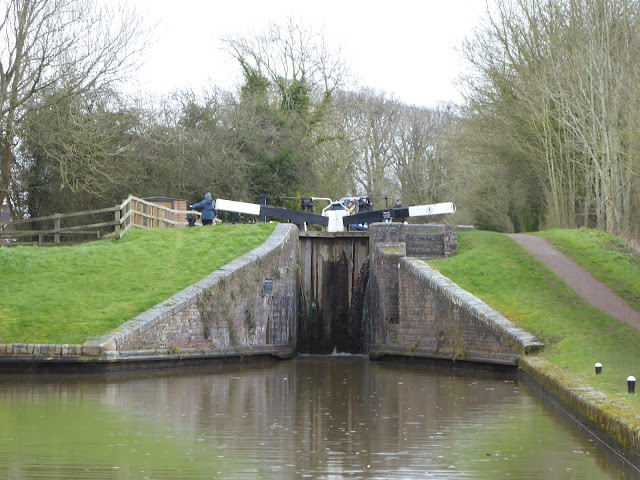 First sight of the marina 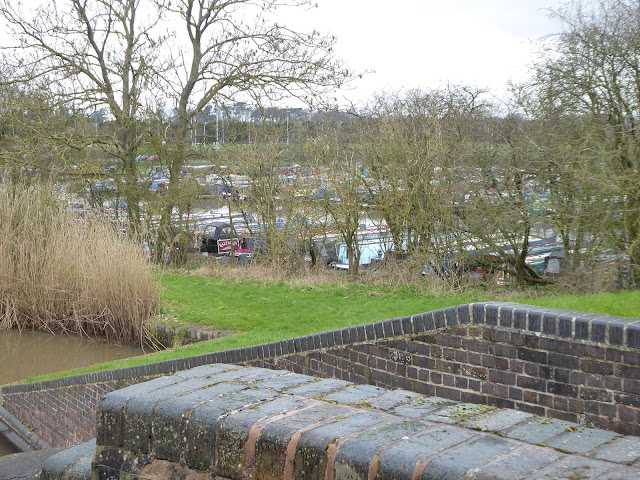 We were back in the marina and moored up in almost exactly two hours - probably a record for us for this run.  The winter has not dulled our locking skills. 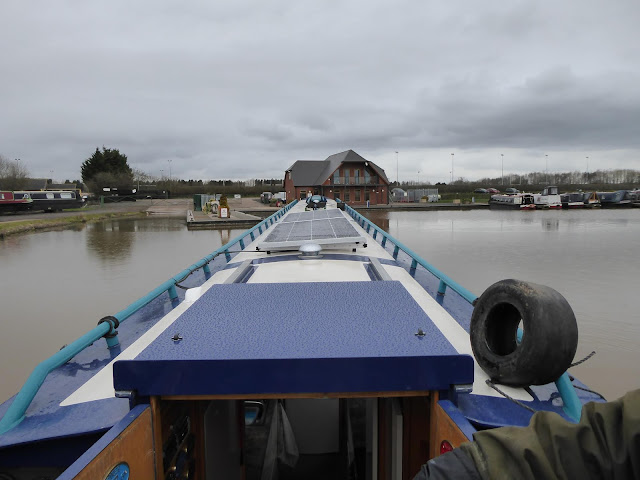 As soon as the boat was secured we headed back to Stoke Prior to collect Sue and Ken's car and head to The Navigation for a well deserved lunch before they headed home.

It was great to see them both again - our first get together since we waved each other farewell at Tixall Wide on 7 August last year.  As you can imagine quite a few 'cruising conversations' took place over the three days.  They hope to head off in the not too distant future and if all goes to plan we should meet up on the North Stratford Canal in mid April - watch this space....
Posted by Jennie at 11:35 2 comments: