We are still here!  Whilst we miss Tentatrice and life afloat, we are both certain that we made the right decision to sell her and move on to other things.

My knees are better than they were, so we are managing to get out and about a bit.  Some recent highlights are as follows:

Two friends came to stay for the weekend along with Monty's best pal, Labrador Kiera.  On the Saturday we went across to visit Pakwood House, a NT property in Lapworth.  It is a fine Tudor house that has been owned by the NT since 1941.  We had been before, but it was a first visit for our friends. 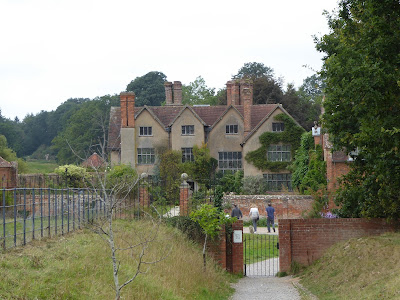 The weather was dry with even a bit of late September sun. The first thing to do was to take the two dogs for a walk through the woodland.  There are not many things better than being able to kick your way through fallen leaves! 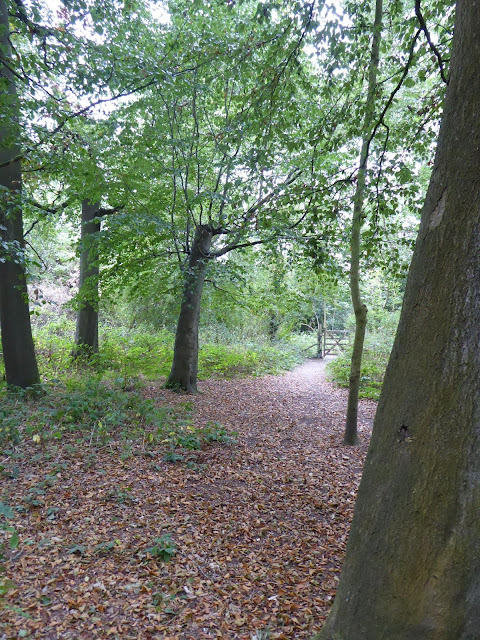 Kiera was too busy in the undergrowth to pose for a photo. 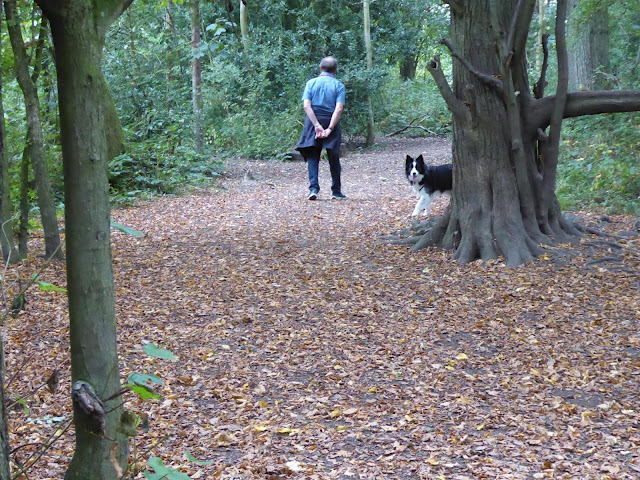 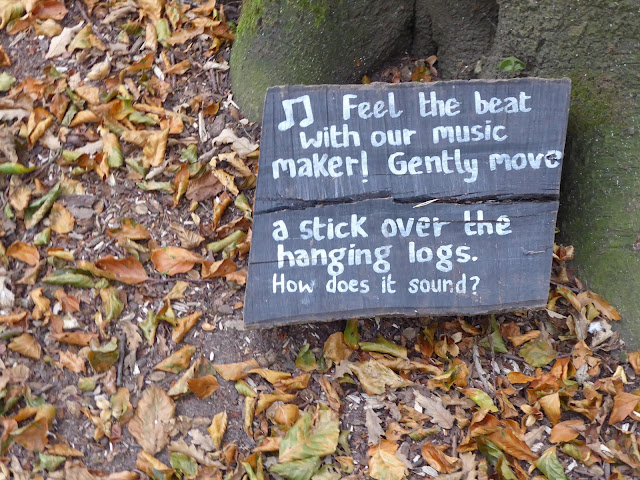 Well who resist such a challenge - not us! 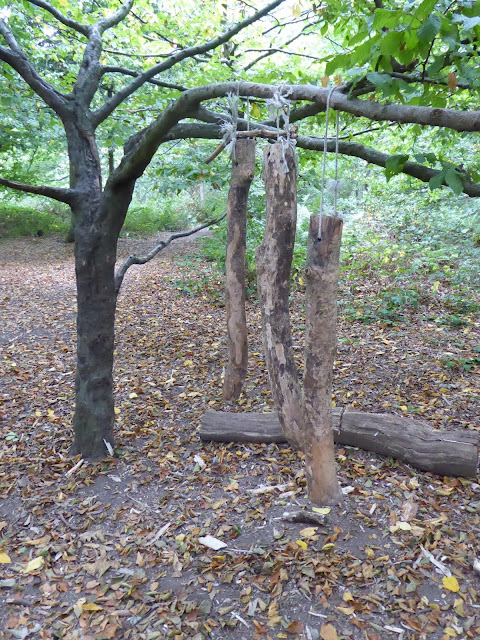 A post walk coffee and very large slice of cake was next on the agenda.  Both were really good and the cake so large, that no lunch was required!
After that Chris and I found a bench in the sun and stayed there with the dogs (it was too warm to leave them in the car) whilst our friends went and had a quick look round the house and formal gardens.  The grounds are famous for the avenue of Yews. 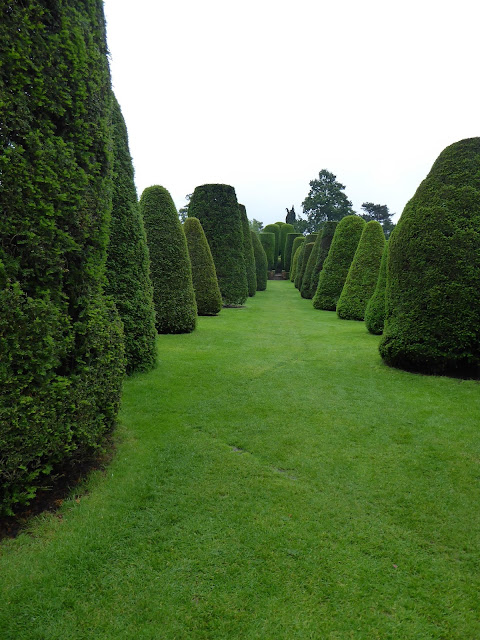 Sadly some of them are very sick

What a shame that common sense does not prevail and they have to ask folk not to climb on the sick trees. 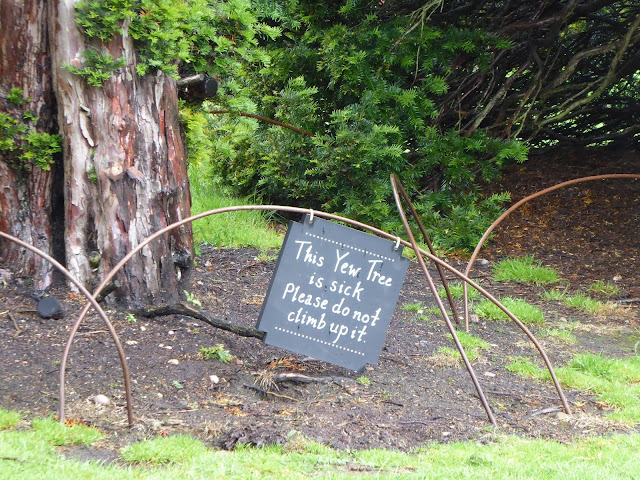 The only time we have been in the house was one very wet New Year many years ago when it was full of the most amazing paper Christmas decorations - we must go back again one day.  It was a great day out and we enjoyed the rest of the weekend just chatting, walking the dogs and eating well with the odd libation here and there!
Weekend 2
This time we went to visit friends who moved back from Spain to Melton Mowbray (or just Melton if you are local!) a few months ago.  They have been very busy doing a lot to the house, but they were now ready for visitors.  Our visit was well timed - it was the weekend of the Melton Mowbray food festival.  The weather was wet and pretty miserable.  All the stands were under cover, but open to the chilly elements, so we did not linger long.  Long enough to see a demonstration on how a MM pork pie is made which was fascinating and to buy a few things including, of course, a pork pie! 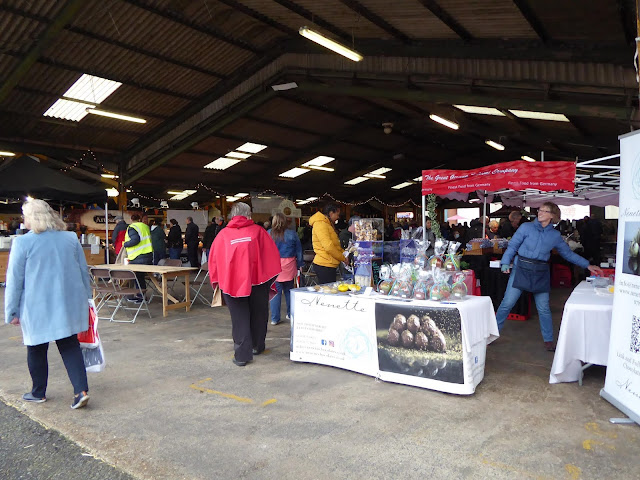 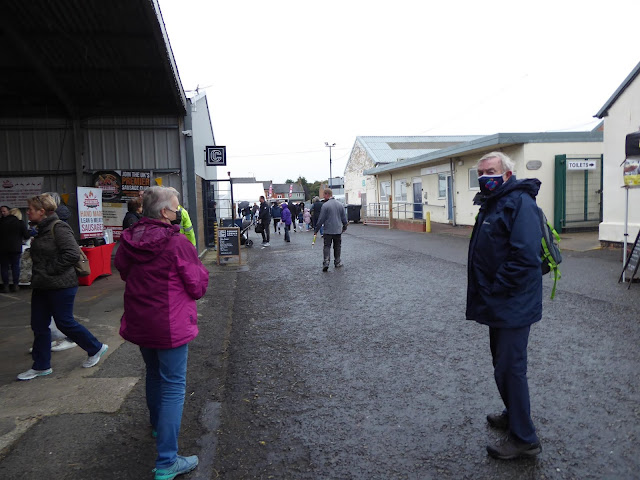 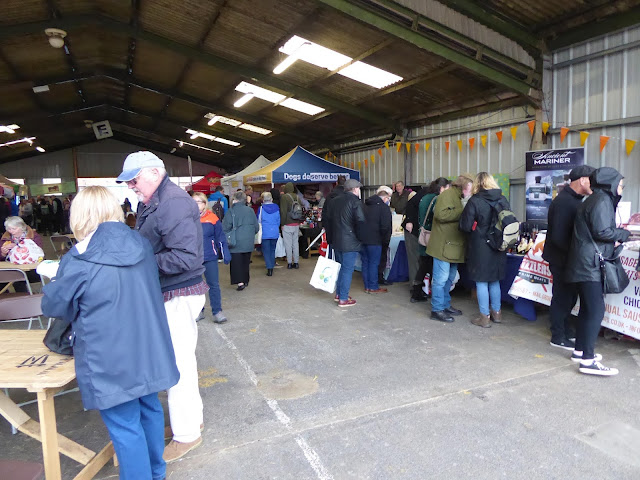 Quite close to their house there is a country park which Monty loved.  I am sure I took some photos, but they have disappeared - we will just have to go back to take some more!
When they bought the house it came complete with a pond including the occupants - coy carp!  Monty was fascinated. 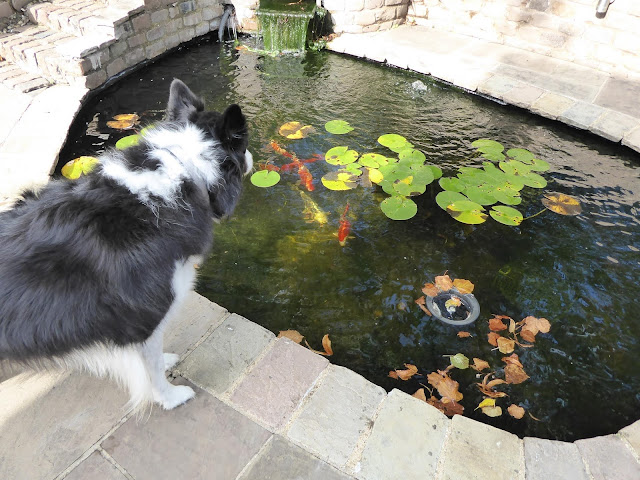 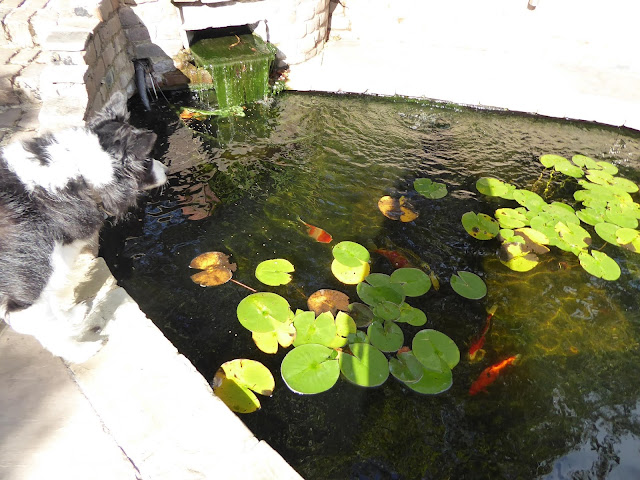 Once again a lot of chatting and good eating (and yes the odd libation or two) was enjoyed by all of us.
Weekend 3
This just involved me - I left Chris and Monty at home whilst I swanned off with our daughter for our first ever mother/daughter weekend away.  We only went to Malvern, so not much travelling, but we had a ball.  Our first stop on the Friday was at Malvern Spa.  To me that name conjured up a rather grand stately home made from beautiful stone at the end of a long tree lined drive.  I was completely wrong - it is a very rectangular ugly building on an industrial estate!  Inside, however, it was wonderful and we enjoyed a day or being pampered and just relaxing.  We left mid afternoon to head to the centre of Malvern to an Airbnb apartment. It was far from grand, but it was clean and had everything we needed including a space to park the car for no extra charge.
These two views were taken from the entrance to the car park 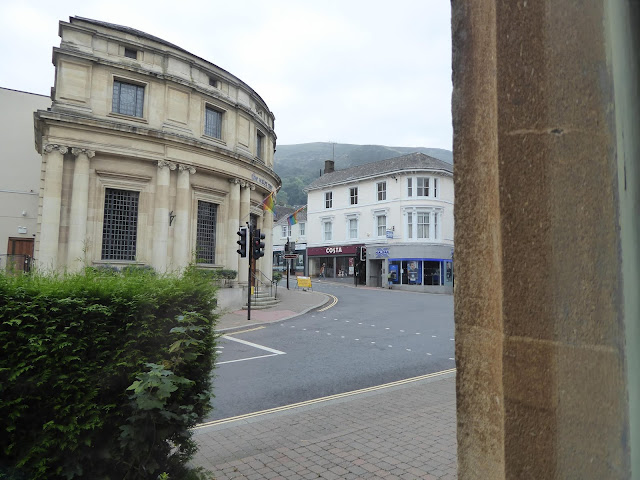 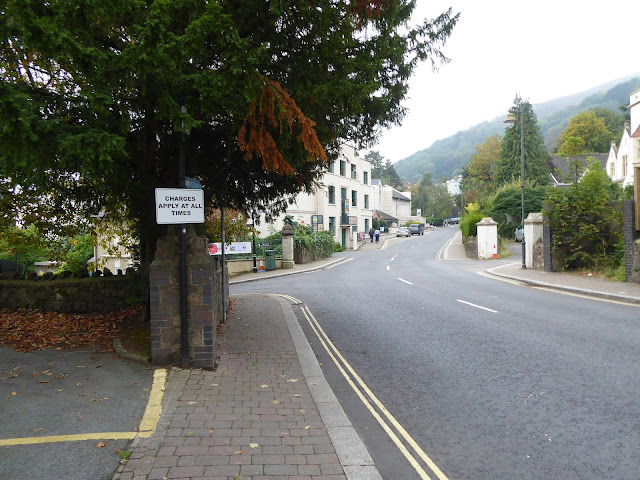 That evening we had a 7 minute walk (at my pace which is still a little slow) to L'Amuse Bouche at the Cotford House Hotel where we had booked a table for dinner.  It was pricey, but we both agreed it was worth every penny and I aim to go back again with Chris one day.  The food was pretty much Michelin standard.
Saturday we spent just wandering around Malvern - somewhere neither of us had been before.  Our first stop was The Priory. It certainly dominates the town 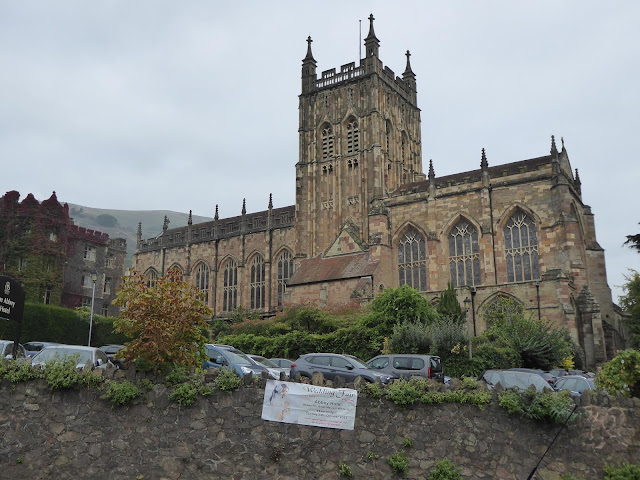 I got this information from Wikipedia:
Great Malvern Priory in Malvern, Worcestershire, England, was a Benedictine monastery (c. 1075 – 1540) and is now an Anglican parish church. In 1949 it was designated a Grade I listed building. It is a dominant building in the Great Malvern Conservation area. It has the largest display of 15th-century stained glass in England as well as carved miserichords from the 15th and 16th century and the largest collection of medieval floor and wall tiles. In 1860 major restoration work was carried out by Sir George Gilbert Scott. It is also the venue for concerts and civic services.
I should have looked at that before we went as we missed the miserichords.  Mind you there was a service going on so we were not able to get everywhere, but it was definitely worth a visit.  The stained glass windows are magnificent - the photos do not really do them justice. 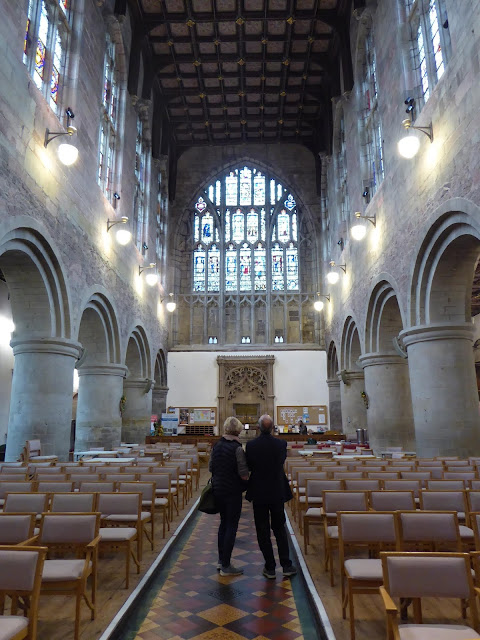 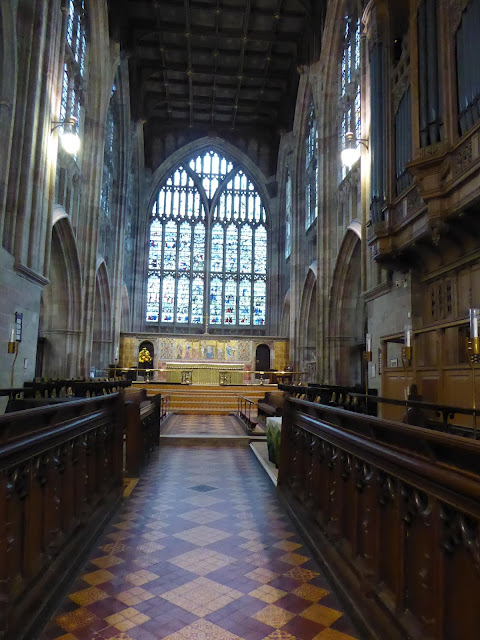 Outside there was an arts and craft market where we spent quite a while admiring their wares.  We did both leave with our credit cards intact! 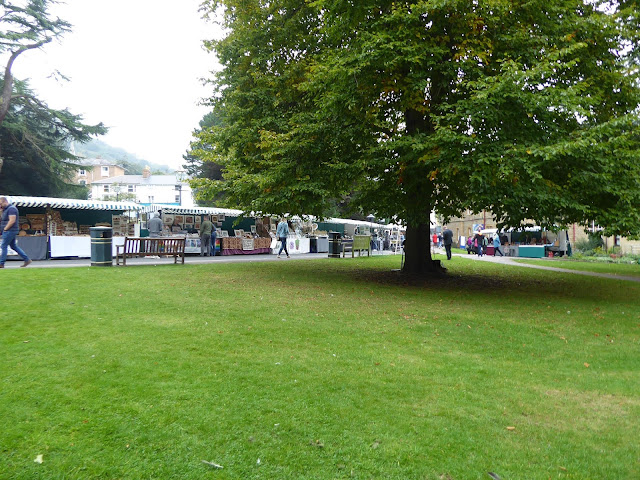 After that we headed up the hill to the shops passing an area with the last of the natural gas lamps that used to light up Malvern on the way up. 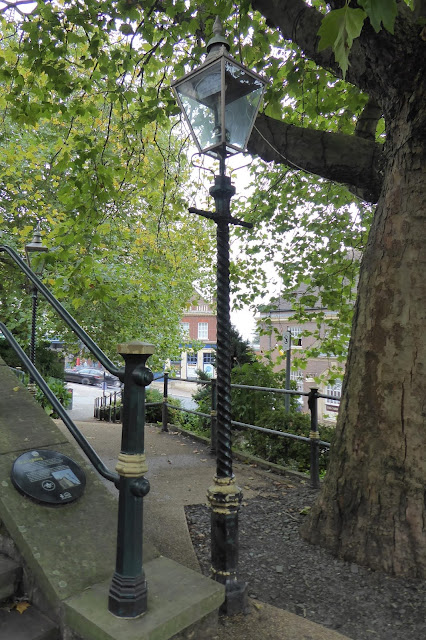 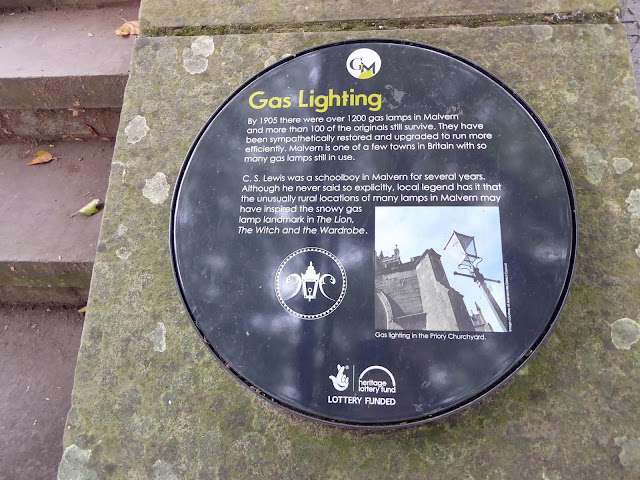 Close to the above was more information - now this is something I don't fancy and I am surprised it lasted as long as it did!  I will stick to the modern spa with a comforting massage, a pampering facial, a float around inside and out in warm water with the occasional visit to the steam room! 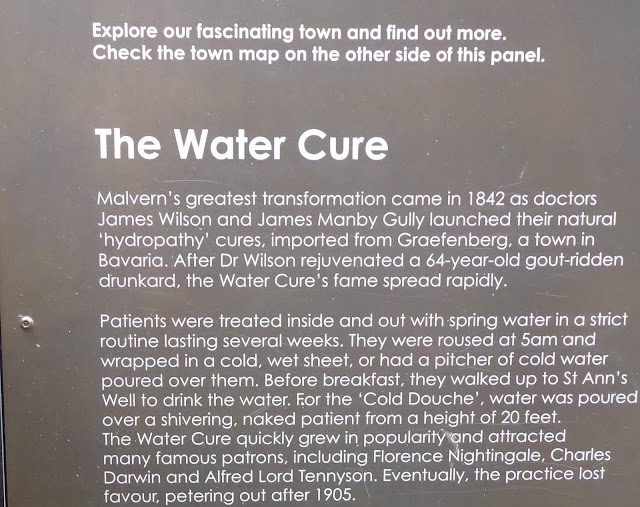 We had a main meal for our lunch and then spent some time wandering around the many shops.  The amount there is available to buy was extraordinary, but once again we resisted temptation (it wasn't hard - I am sure some people must buy the 'stuff', but it was not for us) - our only purchase was made by Sarah - 3 candles and a pack of Christmas paper napkins.
Then back to the apartment via what must be one of the most scenic Waitrose's in the country where we got a French stick and some cheese to have for our supper before we headed out to 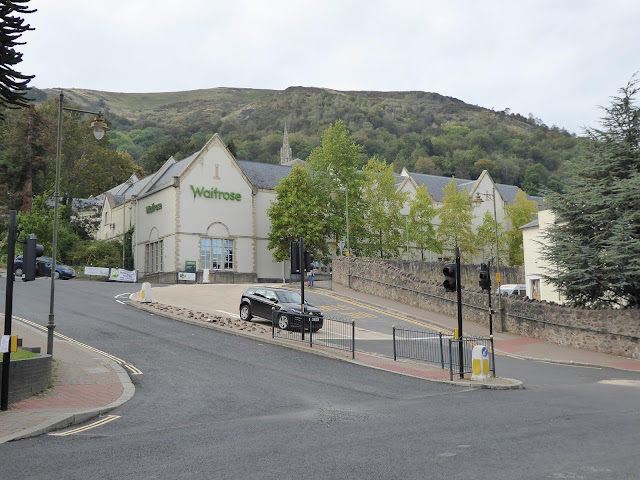 the theatre which was about 100 yards from the apartment. 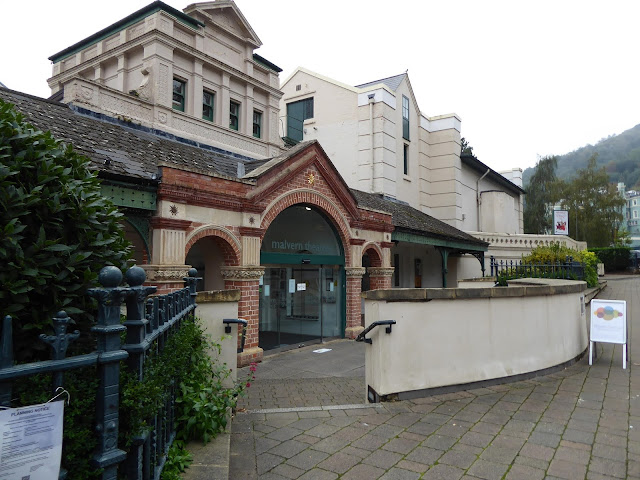 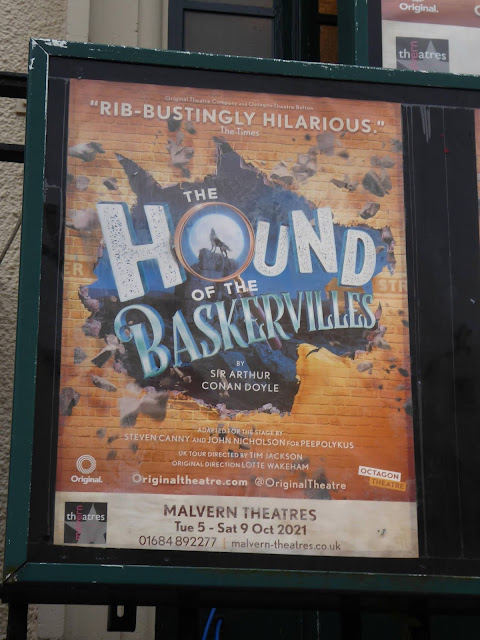 It was wonderful to be in a theatre again for a live performance and it was an interesting version of this play in that it was performed by just three actors (2 male, 1 female).  They did cover the entire story with a lot of costume changes and a great deal of dashing around the stage.  Props were minimal and were well used, but I am not sure I would advise anyone to go out of their way to see it.  At times it descended to a farcical level, which this play most definitely is not.
As you will have seen from the photos taken on the Saturday, the weather was grey and murky, so no good scenic shots.    This must be fabulous on a clear day. 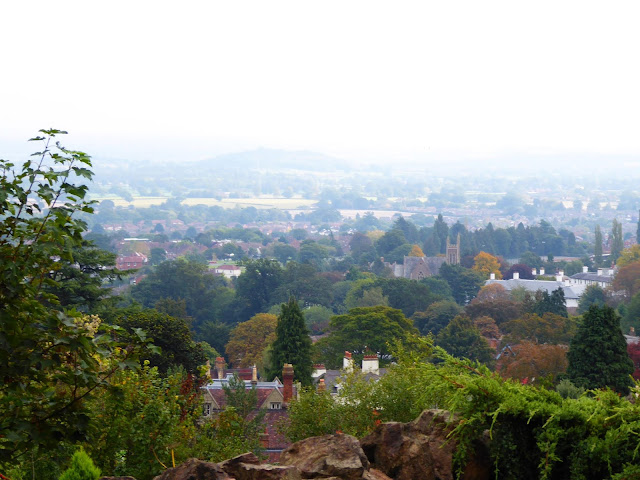 Typically when it was time to leave on Sunday the sky was bright blue and the sun was shining!  We both had a fantastic time and have decided we need to take ourselves off again next year, so watch this space!  It is a town well worth a visit if you have not been before and I would definitely recommend the Airbnb.  It was not posh, but it did the trick and was so much nicer than being stuck in a hotel room.
Posted by Jennie at 10:48 1 comment: