Cruising Days That Is ....
Thursday 20th May 2021
Droitwich Spa Marina to The Boat and Railway Inn near Stoke Works
3 miles, 9 locks

We needed to take the boat back up to Crafted Boats for two reasons - one thing that was missed when they had her at the end of last year and secondly for them to secure the batteries so we pass our BSC which we failed on 10th May.  For those readers who are not boaters, all boat need a Boat Safety Certificate - an MOT for boats, but thankfully only done every 4 years.  Tentatrice's first one was 4 years ago and all was well, but the person who we used before has retired, so a new examiner was found and he decreed that the batteries are not secured sufficiently, so we failed.  He told Chris that if our boat was at 45 degrees in a lock they might tip up!  My reply to Chris was 'if our boat was in a lock at that angle surely the batteries would be least of our worries!'   The only time we have encountered rough water was our crossing of the Wash in 2018 and they survived that.  Chris has looked at them and cannot really see how they would tip up, but it has to be done and his COPD really prevents him taking on these sort of jobs these days, so we have to get someone else to do them for us.

We drove across yesterday morning, loaded up our overnight things, stuff for Monty and some food for ourselves and set off just before midday in torrential rain and ferocious wind! 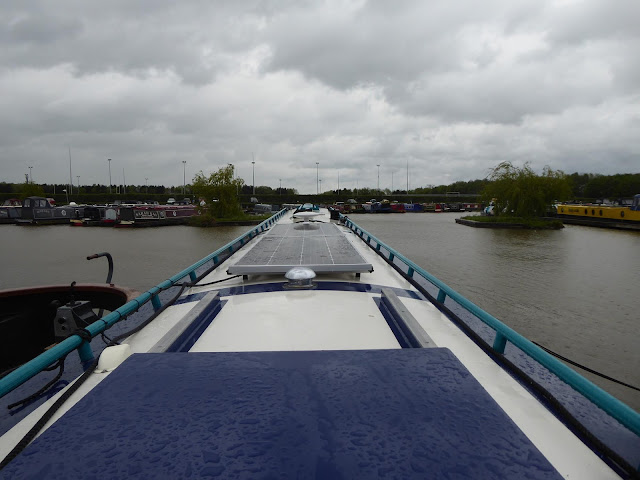 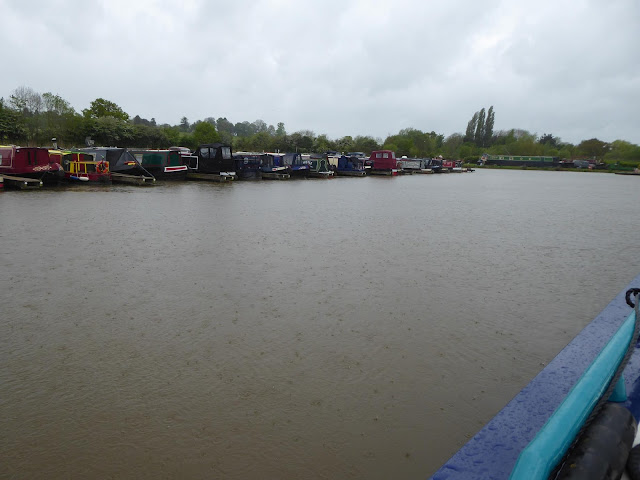 Thankfully there were three lock keepers on duty at Hanbury, so we sailed up them with ease. 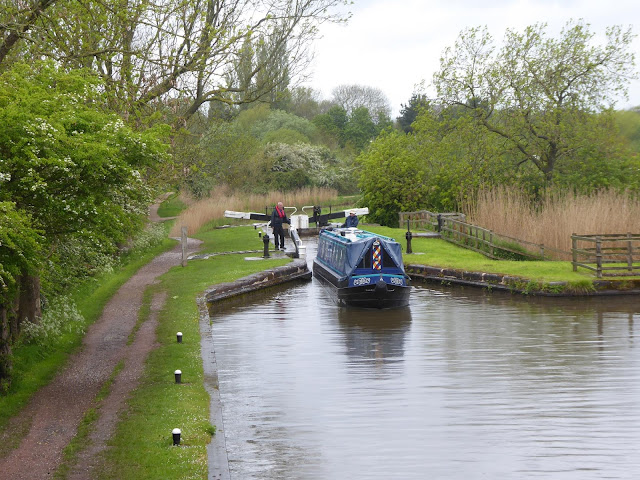 At the top we were rewarded with the first sighting for us of the swans with their new cygnets on a day out from our marina.  I have not seen them with this many before, so fingers crossed they all make it. 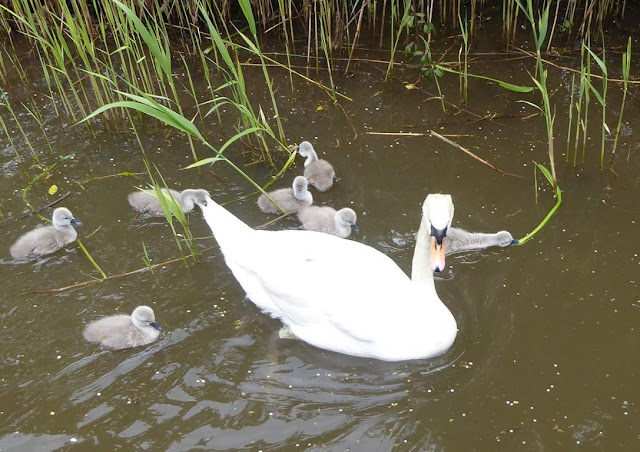 I dived downstairs to make a cuppa and a sandwich for our lunch, but was back out to work our way up the 6 locks at Astwood.  We did not do too badly - two were empty ready for us, one was half full and just the other three were full and had to be emptied. 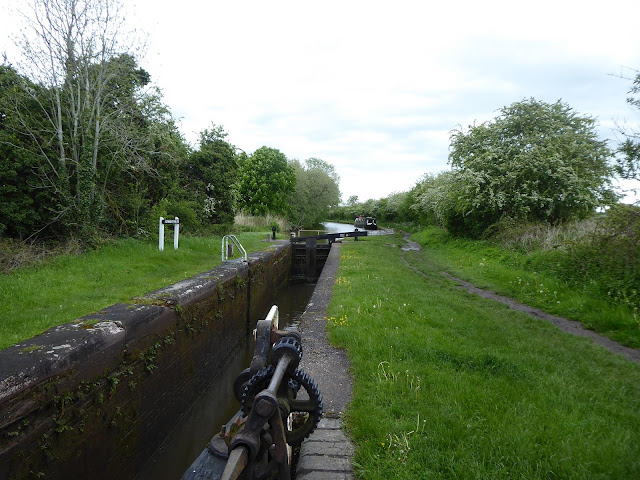 The second (no 18) is of my favourites on the entire system - the lock cottage and garden are so well tended that there is always something to delight the eye whatever time of year. 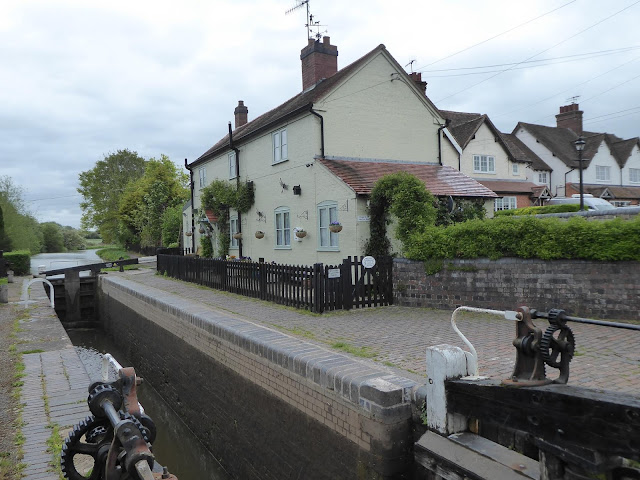 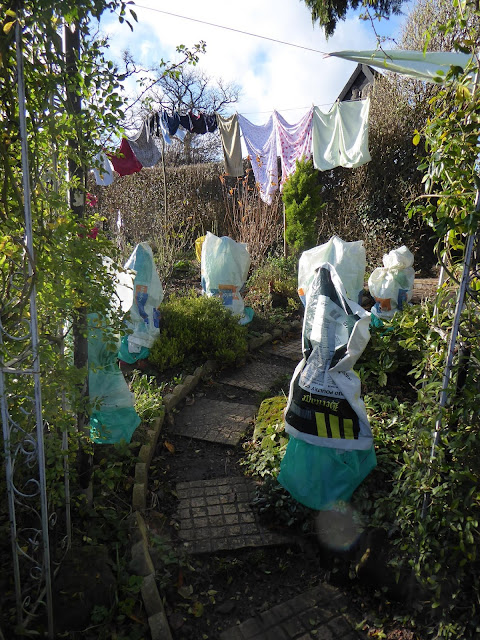 Not so today, but they could have done with them - the weather today was wetter and colder than it was in December! 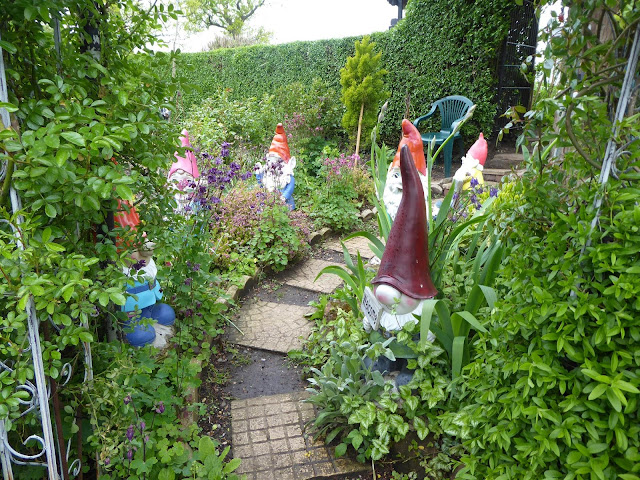 Even in very inclement weather there are still views to admire on this flight. 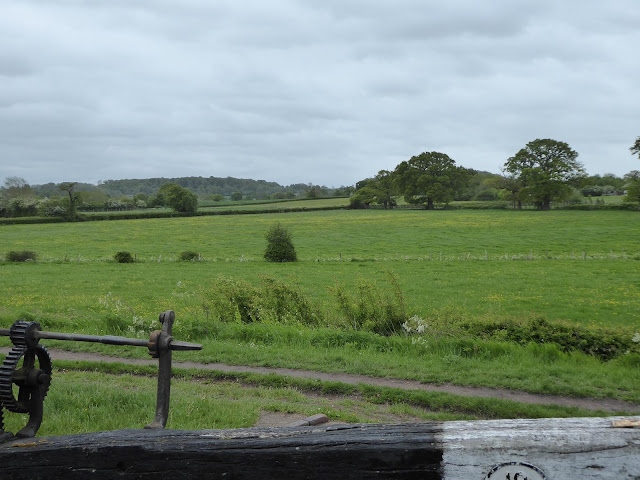 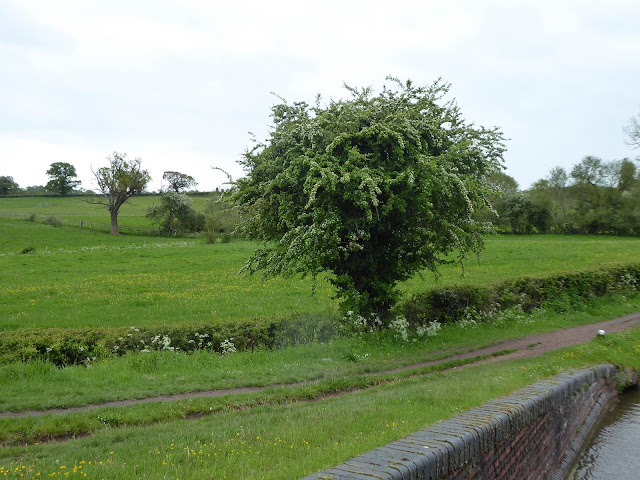 Monty on locking duties - and yes it was bad enough for him to need his coat. 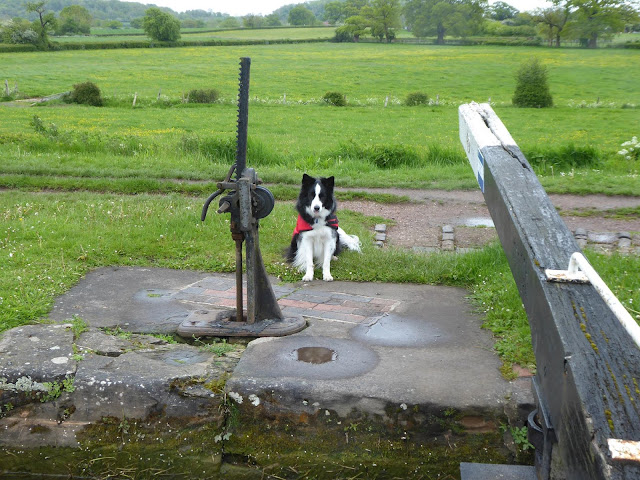 When we do this journey and need an overnight stop we usually pull in just after the bridge at the top of the Astwood flight - we have never seen any other boat there - today there were three of them and the moorings were full! 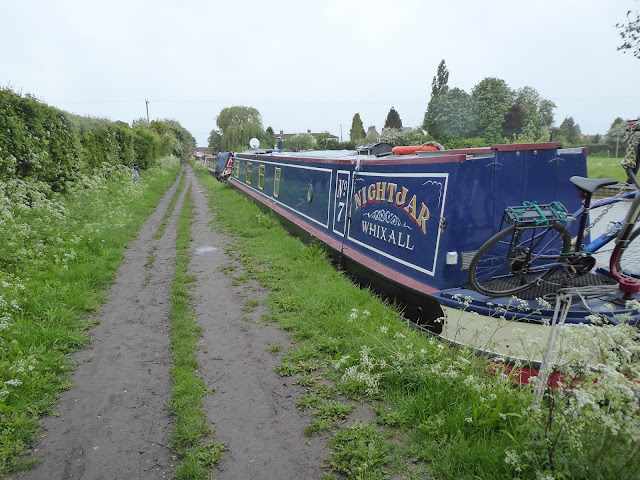 We had thought about going on a bit further as it is quite exposed there, so the decision was made for us and we stopped just after The Boat and Railway Inn.  It is probably the least scenic mooring we have ever had, the towpath was muddy and wet, but once inside the boat we were secure and warm and all we could see from the windows was the cow parsley rather than cars, so it did us just fine. 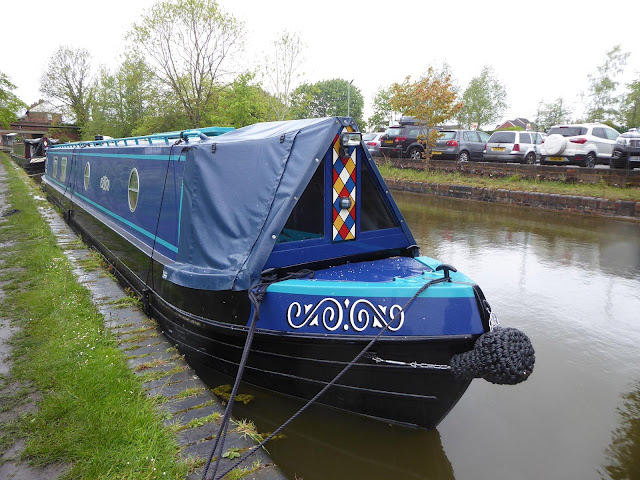 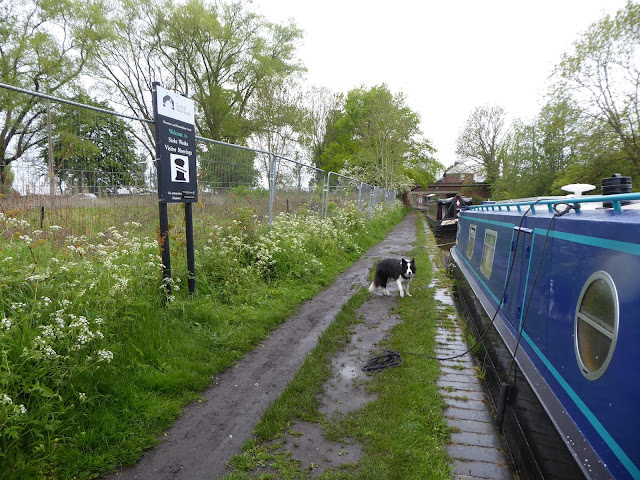 We were joined eventually by another boat which pulled in front of us, so we ended up as the filling in the sandwich.  The rain did ease off fairly early on, but the wind just kept coming and coming, but we made it. 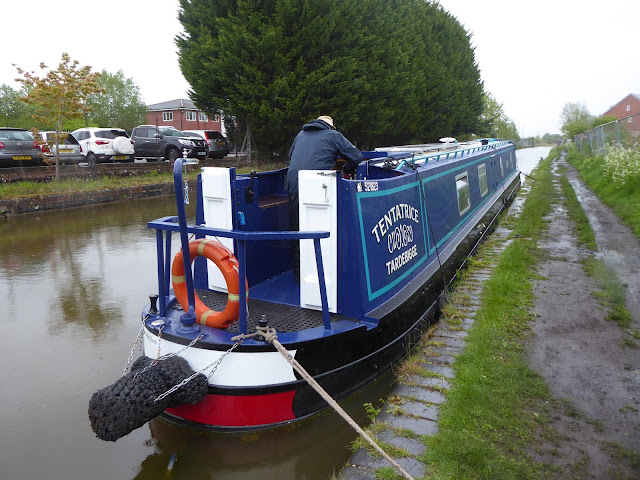 Friday 21st May 2021
Boat and Railway to Crafted Boats, via the bottom lock at Stoke Prior
1 mile, 2 locks
It was raining again when we set off this morning, but thankfully only light rain and the wind was not as bad.  It is certainly not the weather you expect at the end of May!  We were soon at the bottom lock at Stoke Prior - we went in and up, disposed of our rubbish and emptied the wee pot and then Chris winded the boat and re-entered the lock.  By this time our daughter had arrived to collect us and our belongings so she could take us back to the marina to collect our car. 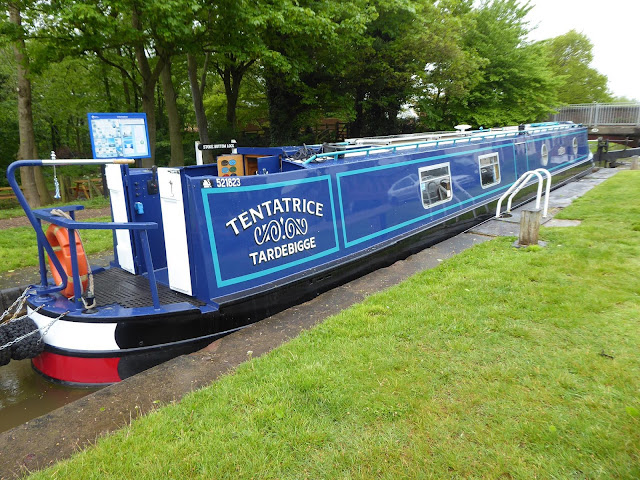 Before we dropped the lock we loaded Monty and our stuff into her car and we met up again at Crafted Boats. 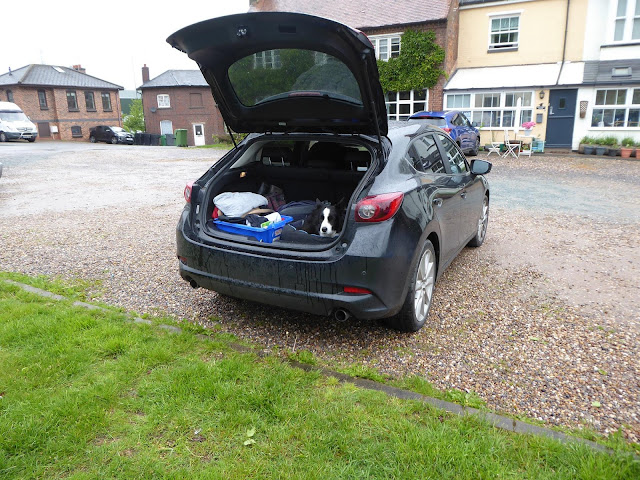 A swift journey followed to Droitwich then as we said thank you and farewell came the best thing that has happened for 15 months - we were able to have a hug with her!  Whoever thought that something so simple that we all took for granted would ever be something so special.

We have put in a request to the weather gods for slightly better weather next Friday when we take her back to the marina.  In the meantime we were heading off to Staffordshire on Monday to stay with friends for a few days.  Something else we all took for granted.

We are wondering if we can pin the blame on this inclement weather on the crew of Cleddau (Boatwif blog and for non boaters, they are the friends we frequently travel the system with) - they proudly announced on Wednesday that they had put their coal and coal irons away for the summer and had moved the dining table to its summer position by the stove!