We woke to a much nicer morning – lots of puddles left from yesterday, but some blue sky and even a bit of sun. 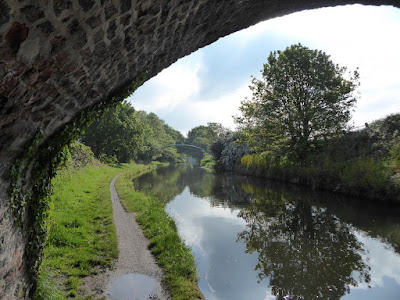 I popped back to the store for the paper and as I was fiddling about trying to tie Monty to the dog mooring ring, a lady said, ‘no need to do that – dogs are welcome in the store’.  A result as far as Monty was concerned.

Monty and I walked for a while with Chris following 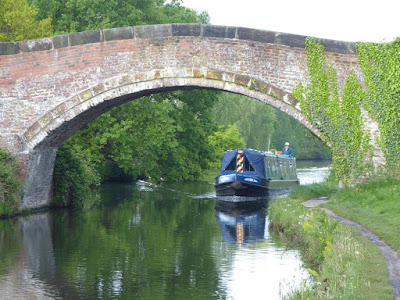 As we sailed along, much to our surprise, as a boat (nb Bella Luna) passed us the helmsman said ‘Read your blog – love it, keep it coming’.  It is always nice and something of a surprise that it gets wider readership than one might expect, so thank you for your lovely comments. 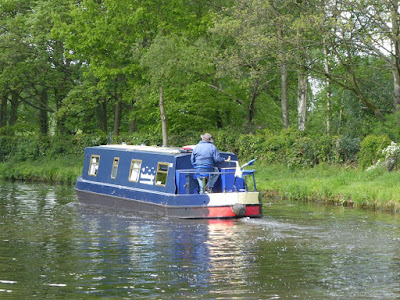 I nearly missed this as it was a bit of a surprise and we are not sure what it is doing there – it looks as though some sort of drainage is going on around it. 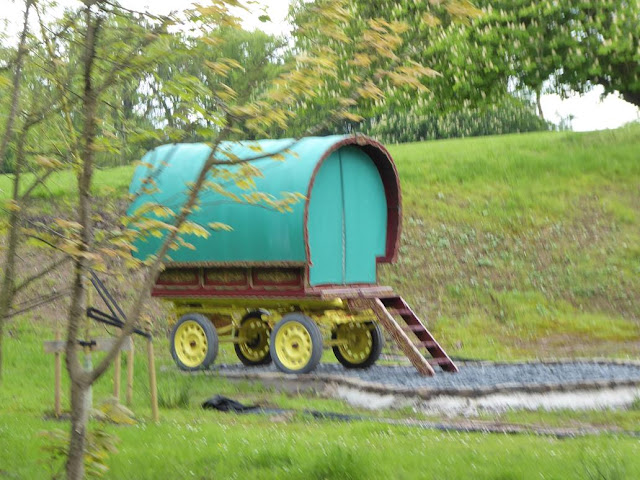 On we travelled through Stockton Heath – I was at the helm, so no photos as I find steering and using the camera a little tricky. 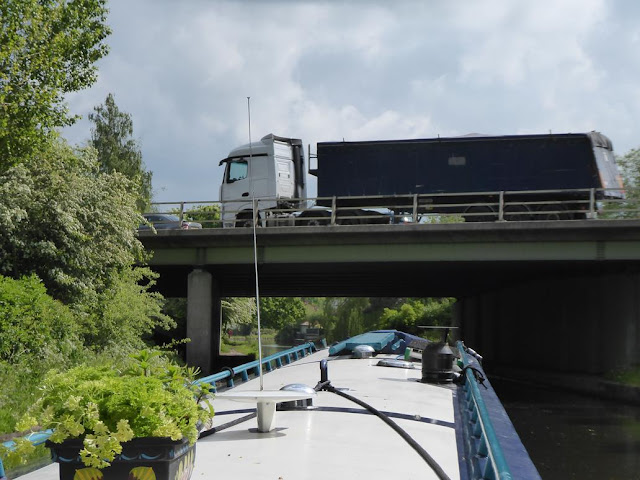 And there are some lovely bungalows just past that bridge, but as lovely as they are I would not give you a thank you for the incessant road noise 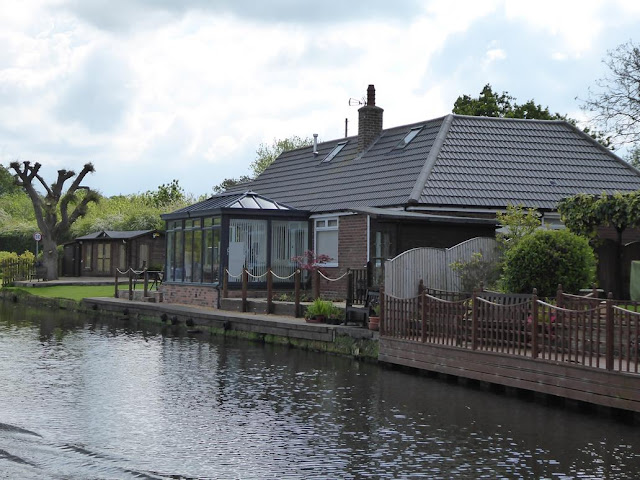 Just past one of the bridges we came upon a crane which is a feature of this canal – they are there to move stop planks into place in case of a breach. The most famous breach was at Dunham Massey in 1971 which closed the canal for 2 years. 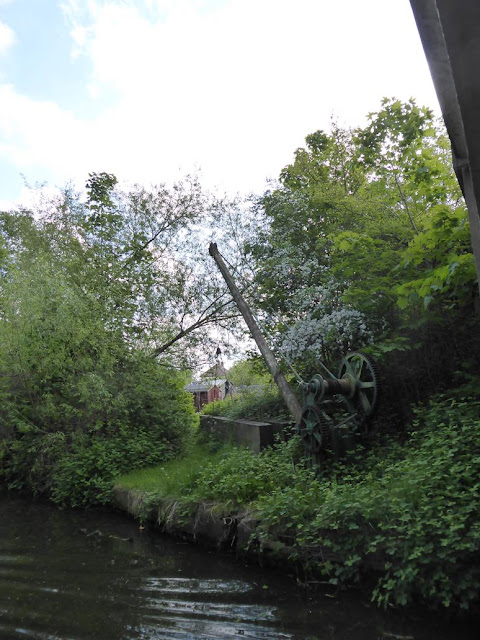 We arrived in Lymm about 11:30 and decided to stop to pop to the shops.  We liked the place so much we spent quite a time wandering about and decided to stay for the night!  I took this as we left to go into town - we are tucked in at the end with the bow on a ring and the stern on a pin. 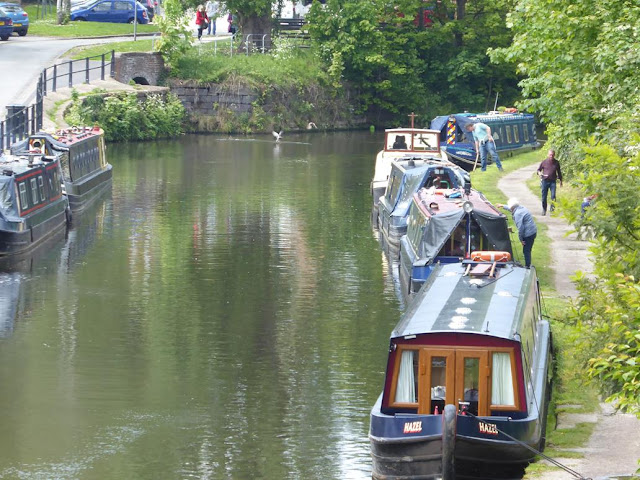 And this from the other side of the canal 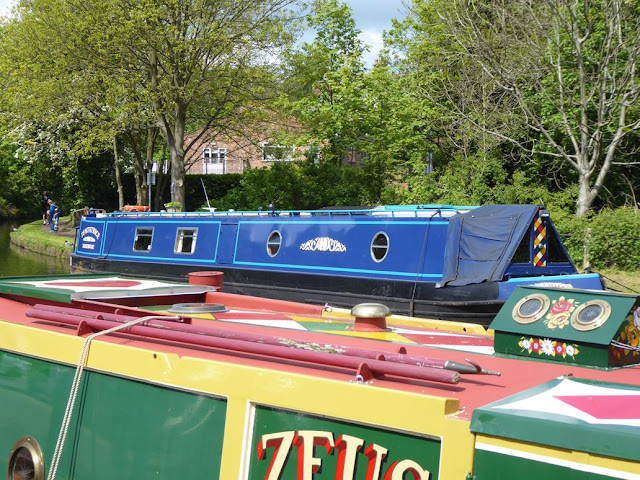 By the time we got back we had the moorings to ourselves, so moved along a bit so we were on rings bow and stern.  I don’t suppose we will be alone for long. 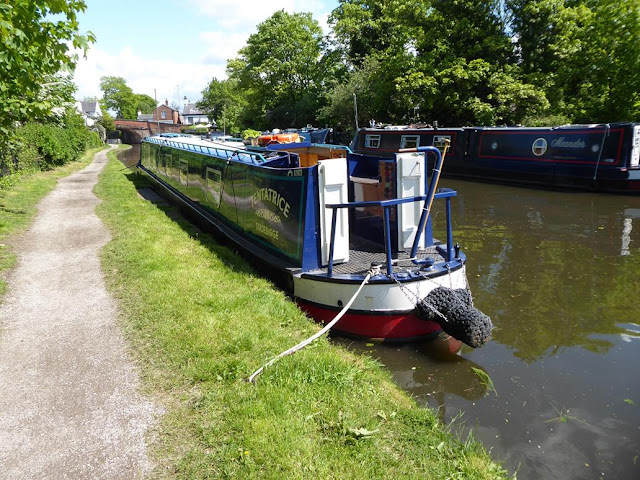 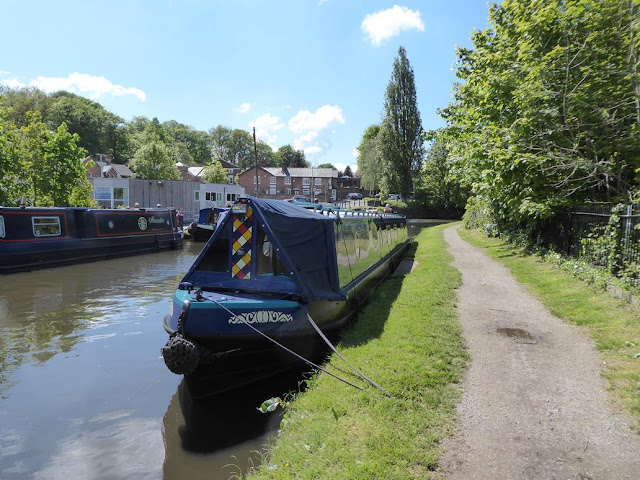 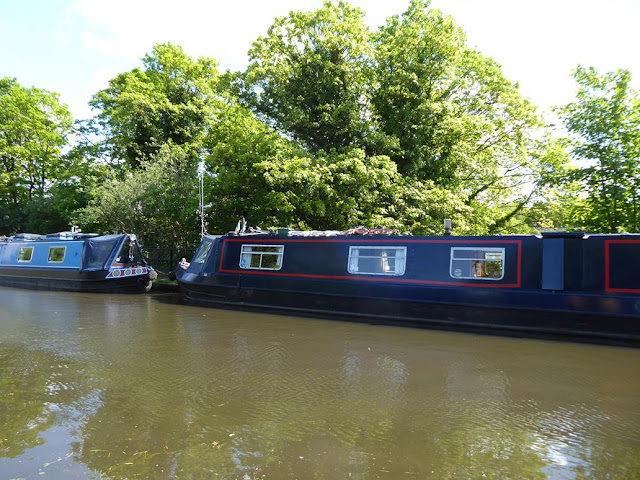 On the left as you approach the bridge is this immaculate house which I now know (thank you Pip nb Oleana) belongs to Matthew Corbett.  I gather he owns a narrow boat as well, so maybe he is out on the cut somewhere? 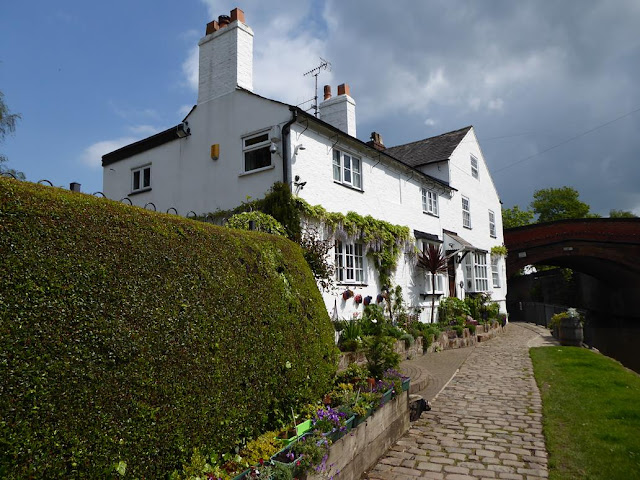 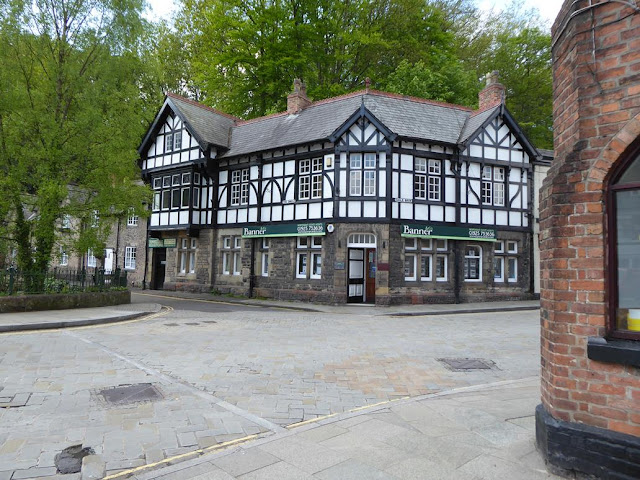 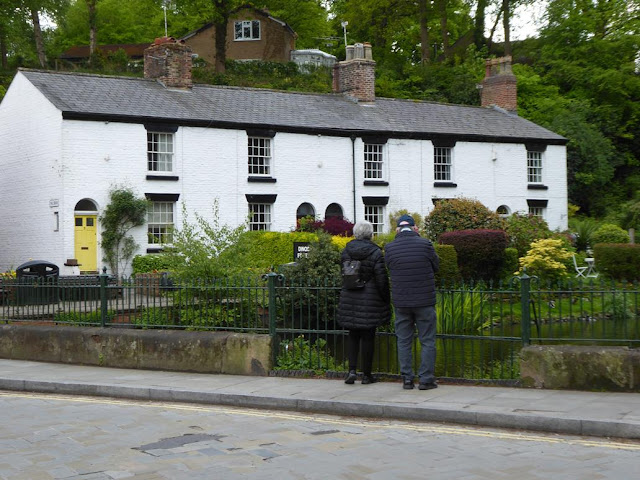 There is also a stream on one side of the road 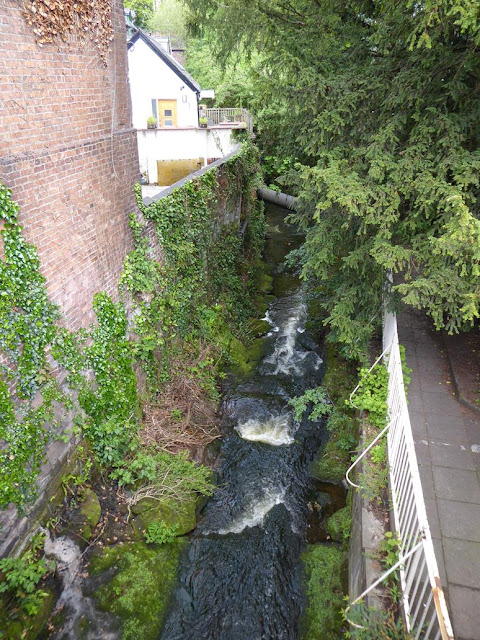 And a pond on the other 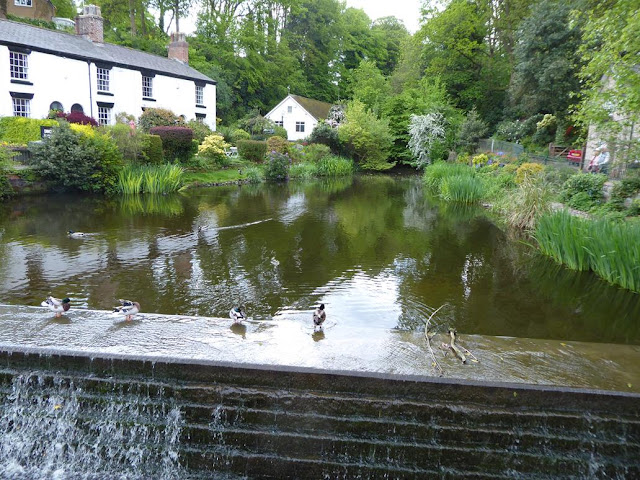 We paid the butcher a visit and then the baker. 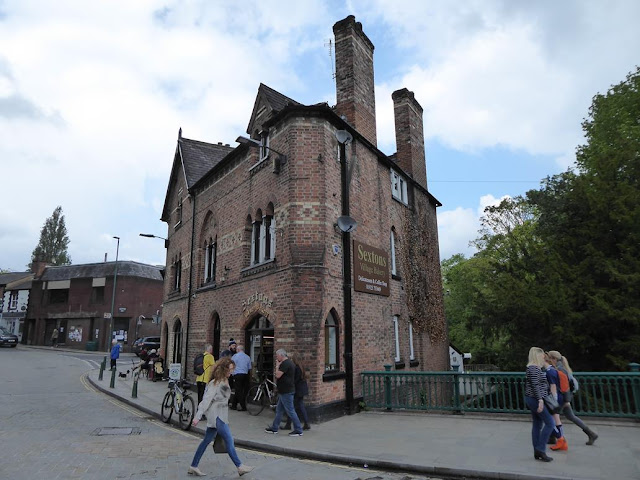 We made two very naughty purchases from the latter – a chocolate éclair (Chris) and a cream slice (me) for dessert tonight.  Tucked away we found a hospice shop selling books, CDs and DVDs where we parted with some money and then it was into the hardware shop for a new mallet (we have always meant to get a spare just in case we lost the only one we own) and a ball of string which is something we have found increasingly hard to find these days.

There is also a heritage centre (closed), but from the window we learnt that Lymm owes some of its historical success to the fustion trade.  Fustion is a variety of heavy cloth woven from cotton, chiefly prepared for menswear and we believe also used for prison clothing. 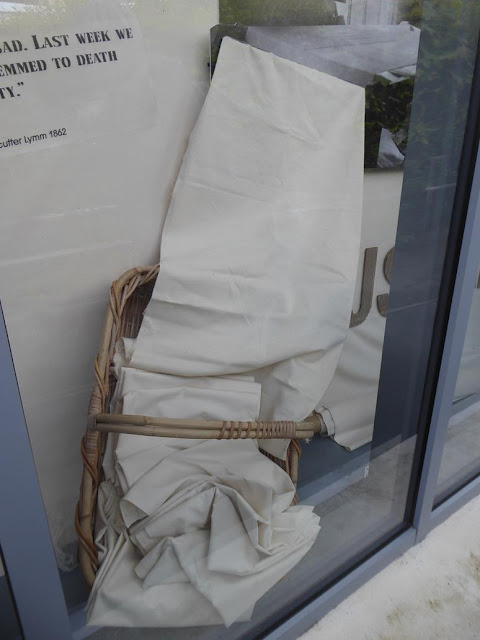 Back down the street to the Market Cross where there is the remains of the village stocks (note the duck – not the most common sight on most high streets!) 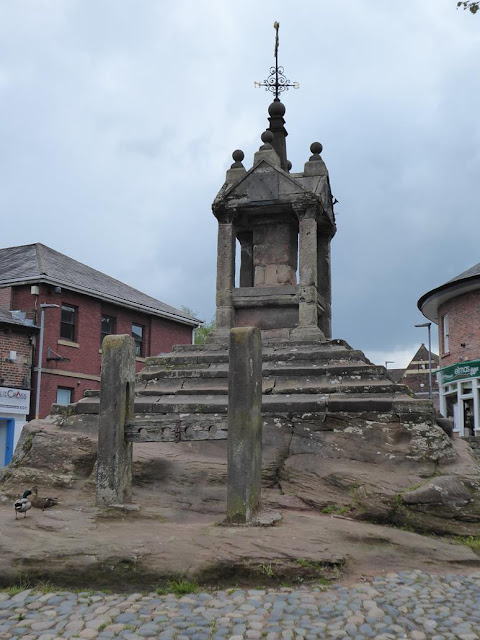 and I popped in to the well provisioned Sainsburys local for a couple of bits.  On the wall of the store  is this rather wonderful tribute 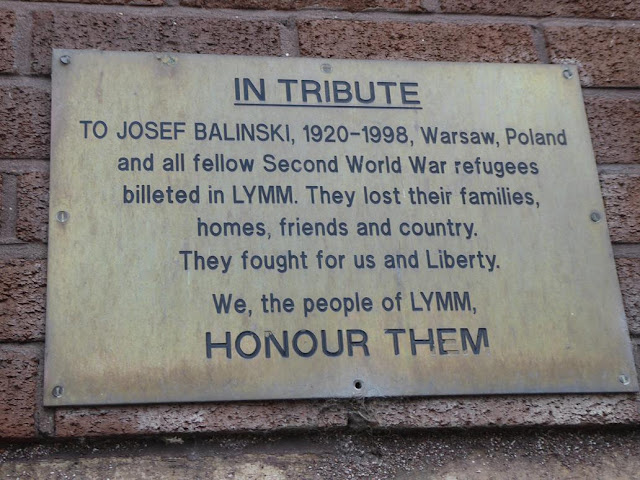 Just as we were making our way back to the boat the heavens opened – we were right outside a pub, so what else could we do but go in and have lunch!  Another good reason for not going any further today.

That’s brought back a memory of just about the only line I remember from Chaucer’s Canterbury Tales, a description of the Knight in the prologue:
“Of fustian he wered a gipoun
Al bismothered with his habergeon”
Meaning that he wore a tunic made from fustian, which was stained by marks from his chain mail!