Today was dry, the wind had dropped and it was therefore a little warmer – much pleasanter sailing conditions.  You can see how close to the road we were overnight and whilst it did not disturb us, we would not choose to moor here again, especially now we know what is available below the Middlewich locks. 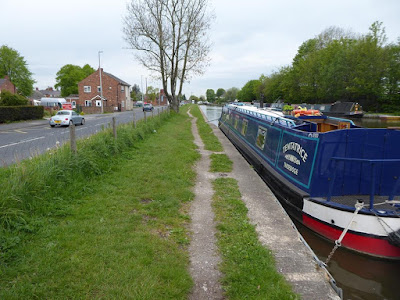 My timing was perfect this morning - as I popped my head out to go across the road to the local McColl shop (well stocked for a small store)  along came Halsall Fuel Boat.  Rather than ‘stop me and buy one’ being for an ice cream, this was a case of 'two bags of coal please'.  Yes, it is still cold enough for the fire to be on. 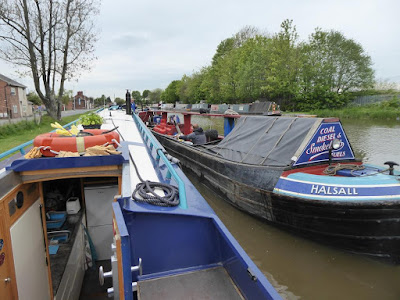 Once underway we descended King’s Lock 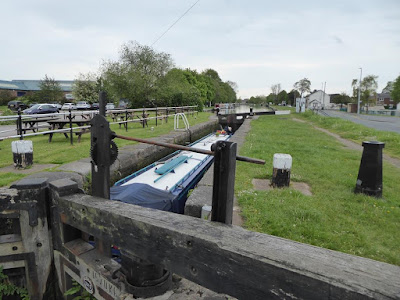 nd passed the Middlewich Junction, which is where we turned left to Llangollen three years ago, so from then on it was all new water to us, which is always exciting and adds a good deal of interest. 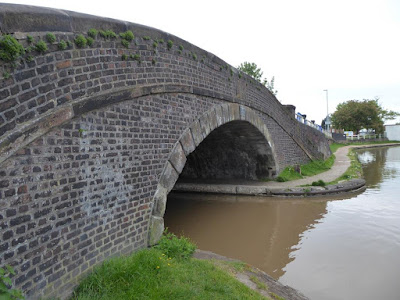 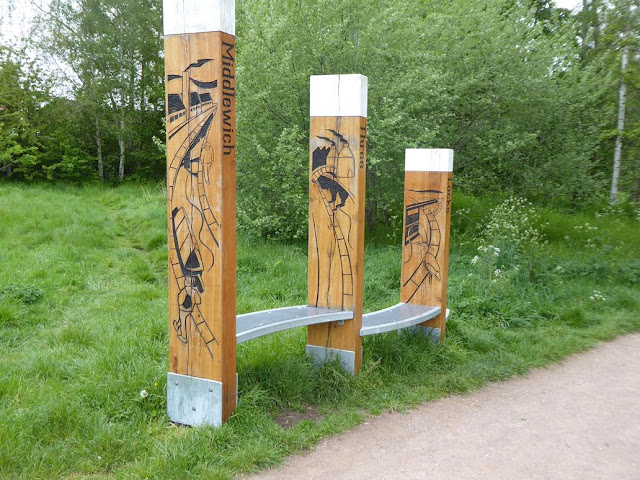 We dropped down the first lock to find a boat well known to many in the blogging world exiting the second lock – now with new owners, but still looking great. 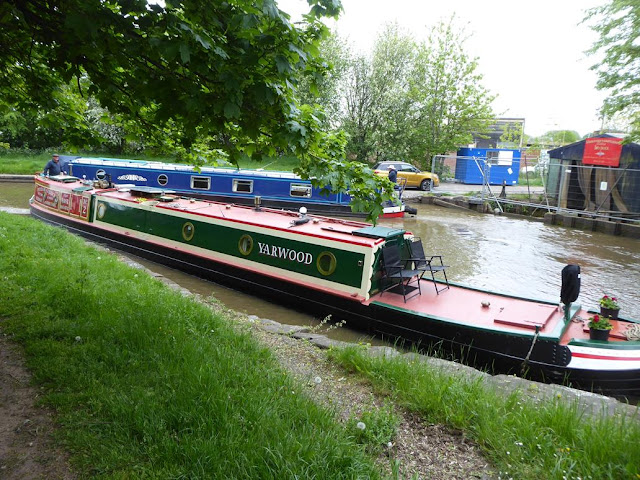 Another very welcome sight was a VLK (voluntary lock keeper) who helped us down the next two locks.  It was then we discovered the extent of available mooring and wished we had carried on the day before, however, all we remembered of Middlewich from three years ago was the mayhem that there was below King’s Lock.  We were both trying to stop for fuel at the chandlery and there were boats all over the place.  It was very cold yesterday and we had been on the go for around 6 hours when we reached Middlewich and were tired.  Our fear was that if we continued and negotiated four more locks (we had already done 14) we might find no room to moor, hence our decision to stop.  We really had had enough by then. 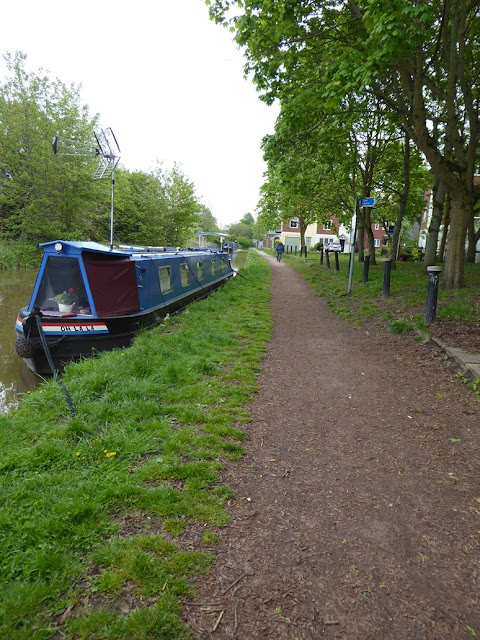 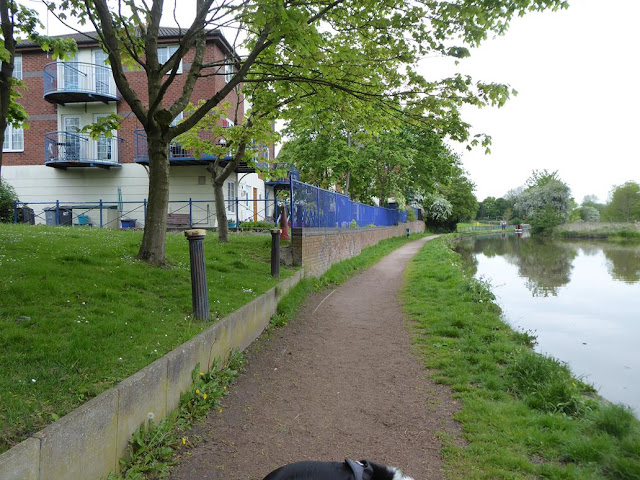 On we went to the last lock of the day – Big Lock.  The clue was in its name!  Sadly a boat had just descended, so we had no one to share with. 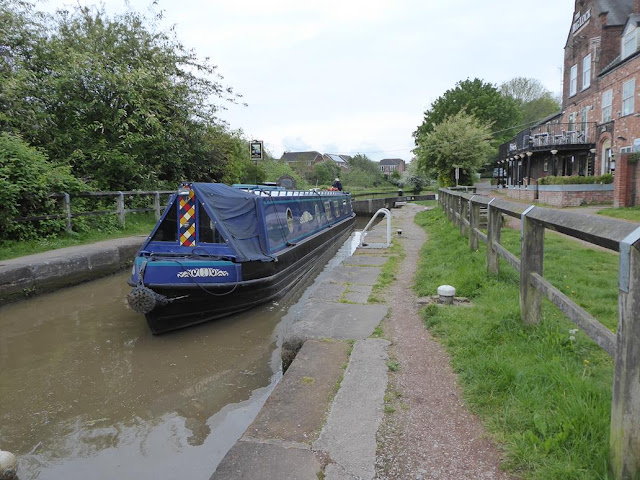 By the time we were down there were three boats waiting to come up – one being Mr Blue Sky who I think was travelling with nb Oleana a short time ago? 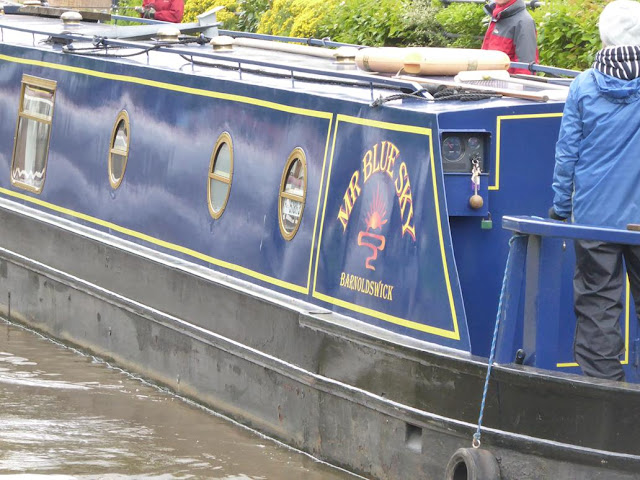 The canal is rural for quite a long way passing through several flashes where the canal  is wide, but shallow on the non-tow path side.  These are areas of subsidence left over from salt mining industry. 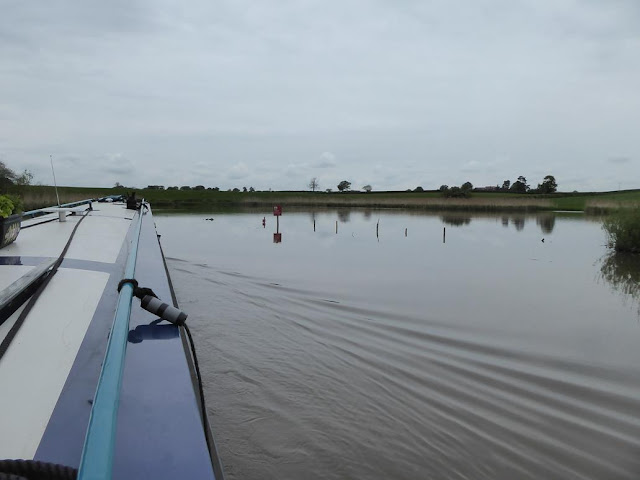 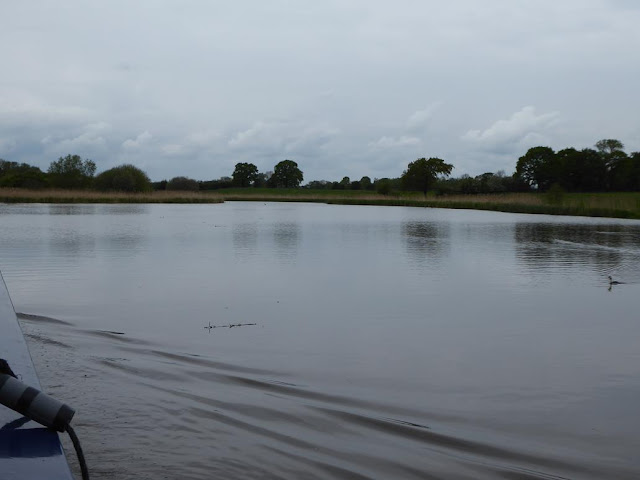 Past Bramble Cuttings – a delightful mooring spot, particularly in good weather providing you don’t need to go for a walk. 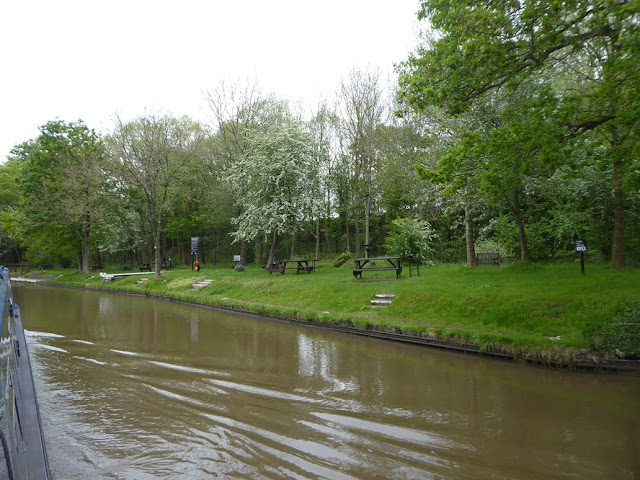 There are some nice properties in Broken Cross, but soon after that the industrial world intrudes 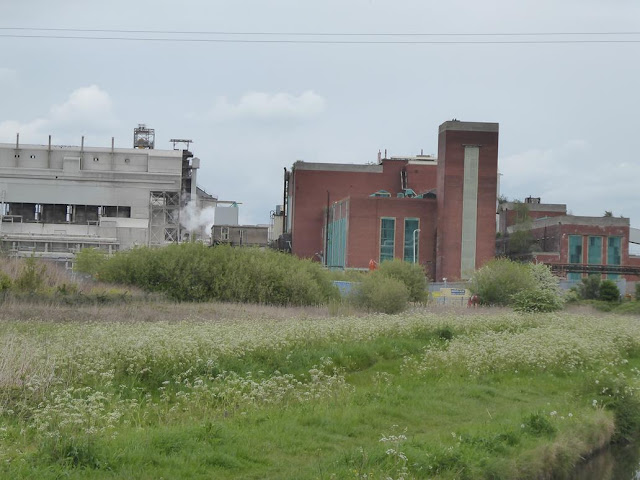 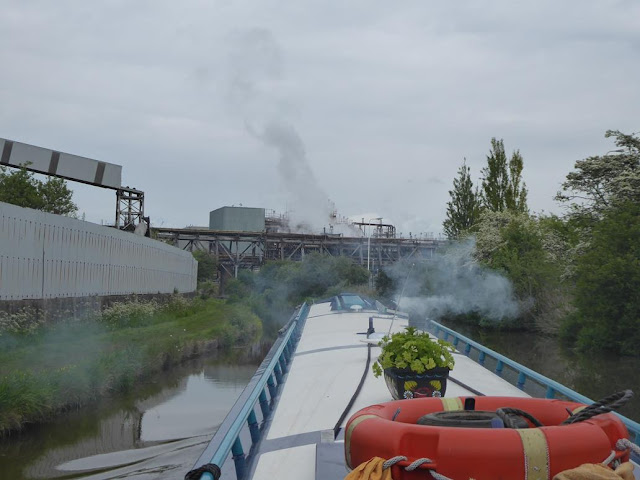 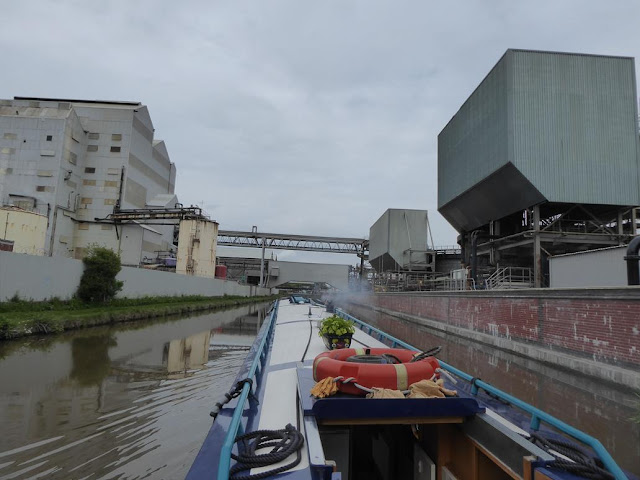 I don’t think this will take its owner far! 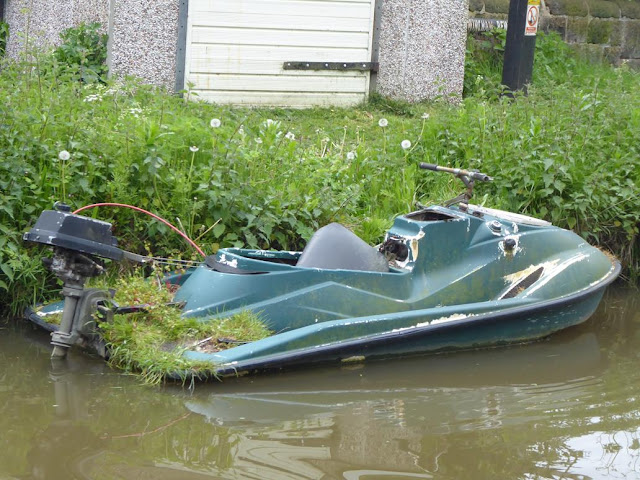 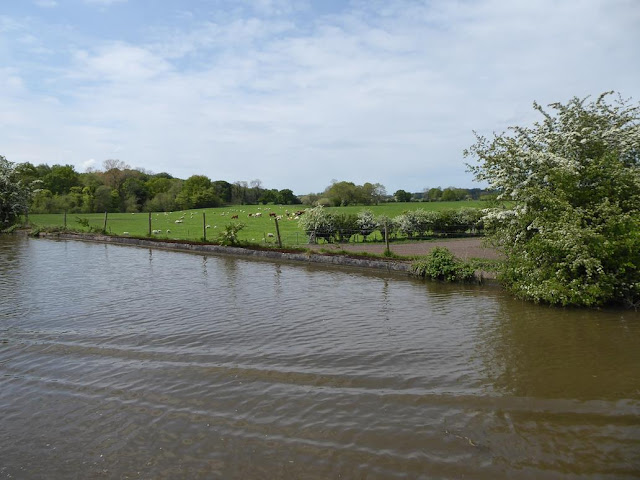 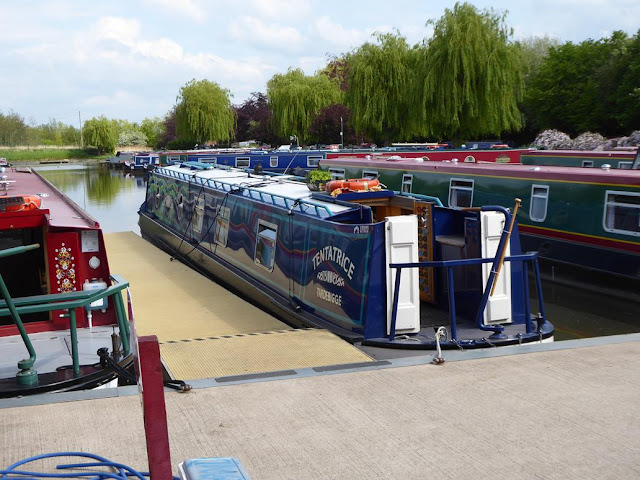 Where they even have a place for Monty 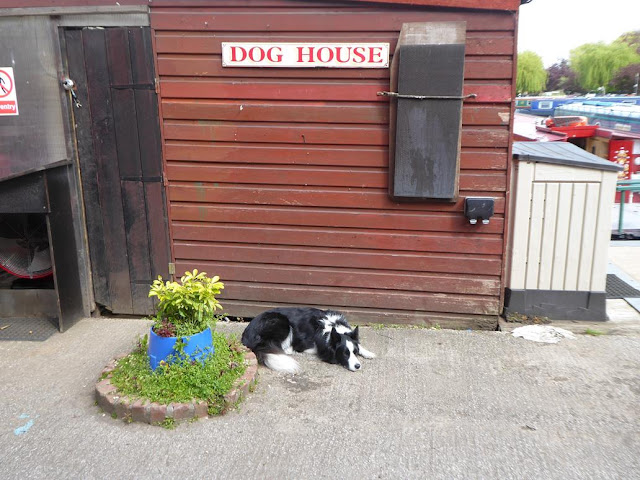 We were due to arrive here on Wednesday for an engine service on Thursday, but having checked the forecast we rang and asked if we could arrive a day early.  Did we make the right decision - was it worth an extra night's mooring fee?  Time will tell.

NB Mr Blue Sky were our locking partners, a lovely New Zealand couple, suspect they might have been with NB Lottie Jane. Gosh new waters, these are old familiar waters to us all the way to Great Haywood. Enjoy them. Pip

Sadly we did not get a chance to stop and chat to Blue Sky - the name just jumped out at me as we passed, hence the not so good picture. We are now expecting to stop at the River Bollin Aqueduct tomorrow, so may see you en route at some point. Here's hoping this rain gives up soon! Jennie

There's a lovely mooring just before the River Bollin Aqueduct. Good views both sides and handy for Dunham Massey Hall National Trust property. However as with most Bridgewater Canal moorings you need spikes.
We will certainly see you tomorrow sometime, we plan to moor at the Dutton breach site tonight.
Mick

Me again Pip - I meant somewhere near the start of the Bridgewater Canal tomorrow night, so I guess we will be ships that pass in the day! Jennie