Before I head off along the cut again - as I was watching the field opposite our mooring over yesterday afternoon & evening and then again this morning. It does seem to have a definite life cycle over a 24 hour period.  When we arrived it was full of cows, who disappeared to be replaced by this solitary heron late afternoon.  He was followed by a flock of Canada geese.  This morning the cows were back. 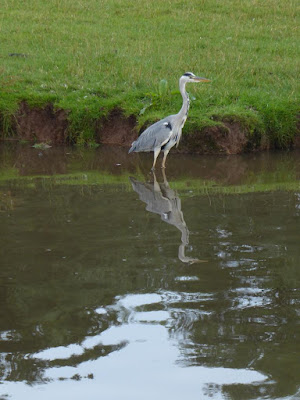 What a fabulous house with mooring for two boats - big enough for two families I reckon. 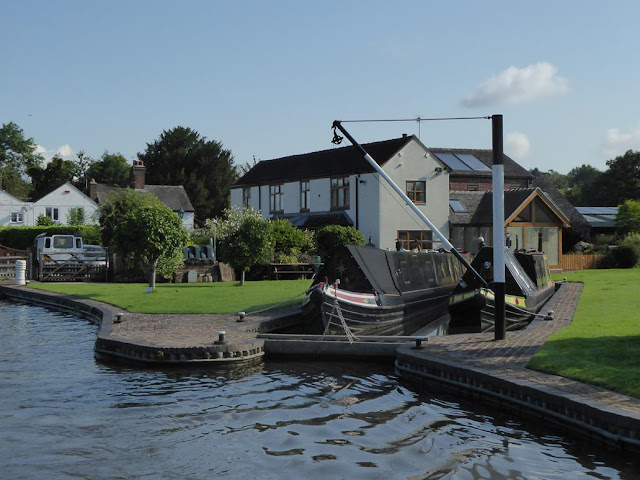 Our first lock of the day 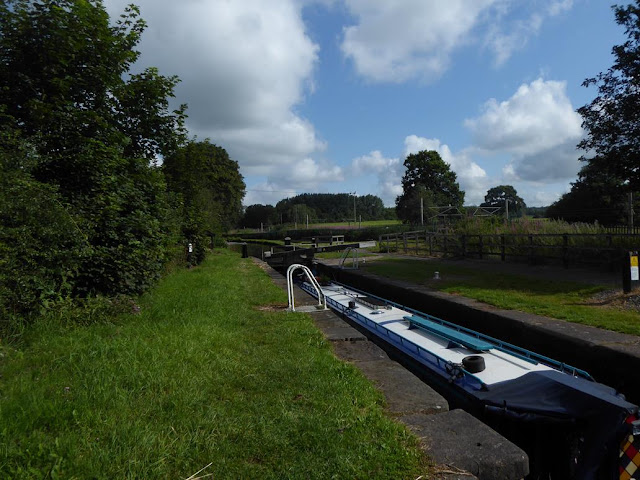 With this sign just across the bridge - Monty has an appointment to go for a run there on Sunday morning.  It is just a fantastic place to walk dogs. 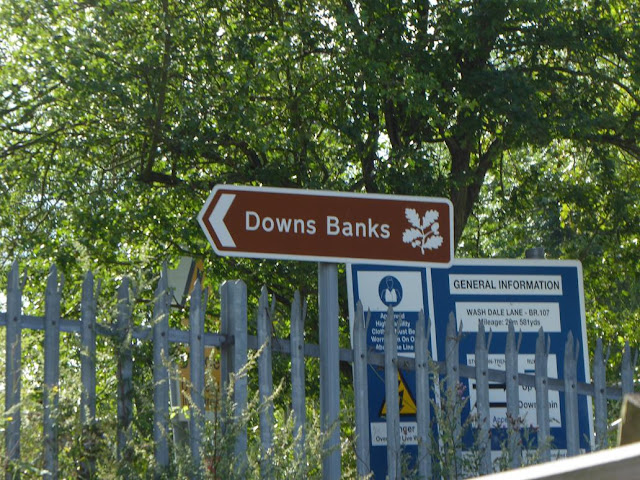 Parked nearby - someone's pride and joy 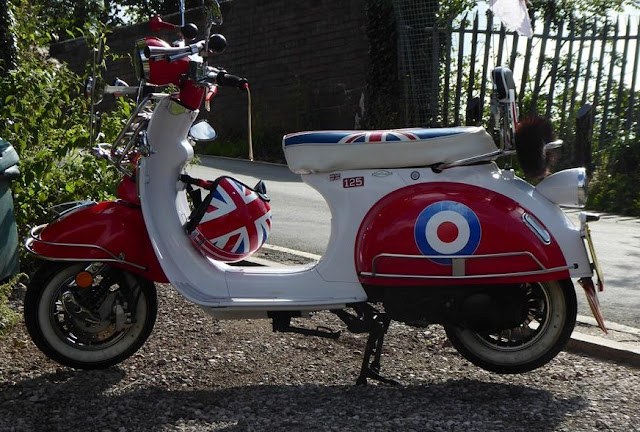 The grass needs cutting, but the 1st Oulton Brownies have tried to make the lock look as though someone loves it. 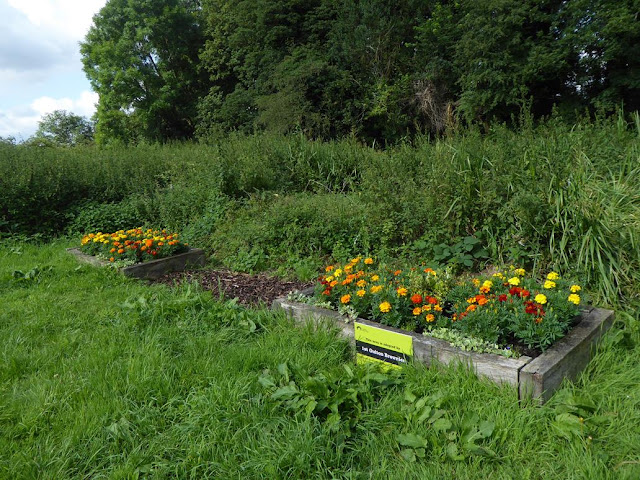 We saw many of these today both on this flight (Meaford) and whilst going down the Stone locks.  Sadly (for us) they were volunteer working parties, not lock keepers. 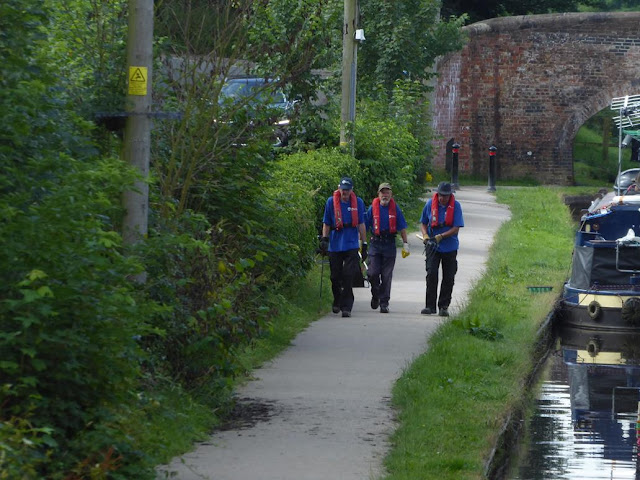 Not a particularly common sighting on the towpath - a local bobby.  She was very chatty and we agreed that it was a lovely sunny, warm day. 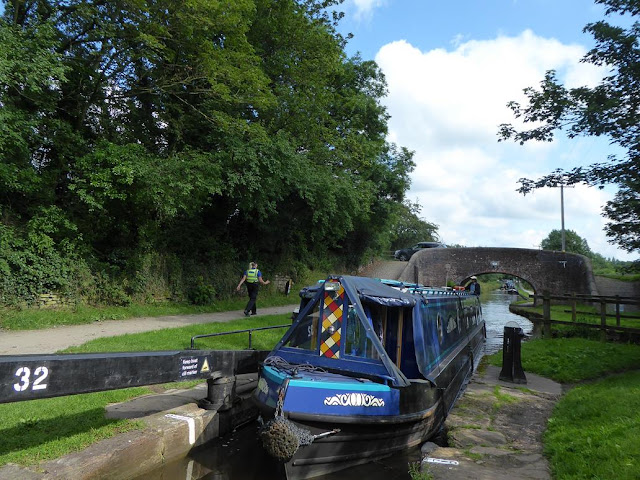 The elegance of this heron was lost on Monty - he really glared at it.  I think he saw it as a threat. 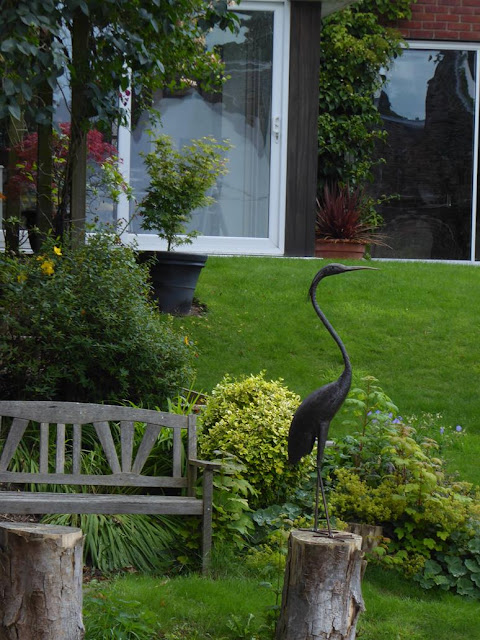 Who lives behind this gate by the lock above the service point in Stone?  A volunteer lock keeper - well one kept going in and out, so I am assuming he lives there. 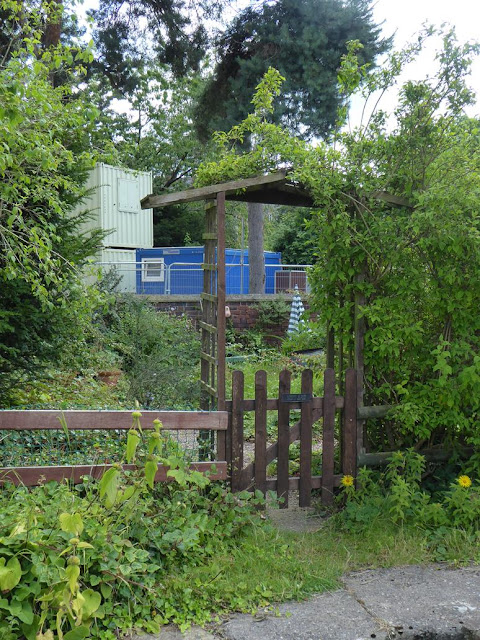 Just as we finished at the water point Cleddau emerged from the lock above.  We moved off leaving them our hose to replenish their water tank. 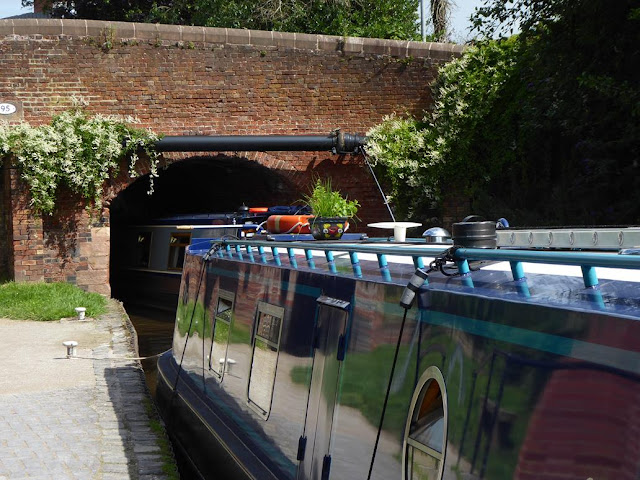 This must be one of the worst situated water points on the canal network as it it also the lock landing and this is a very busy bit of canal.  Still we were as quick as possible and only affected one boat who was going up. 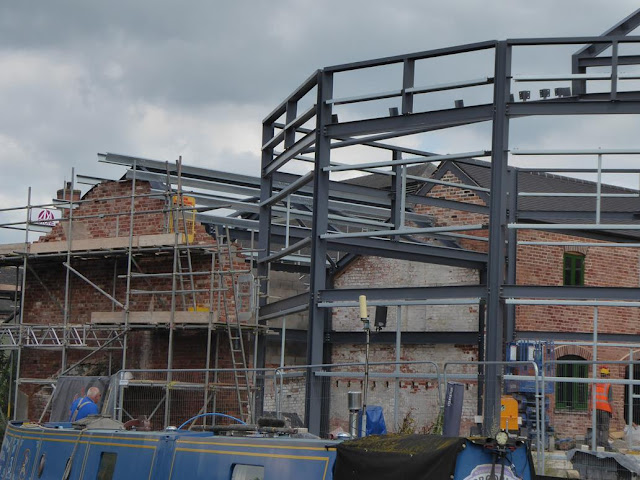 This would appear to be an old pub being turned into a house, or maybe the pub is having a serious repair and re-fit.  We shall see next time we come this way. 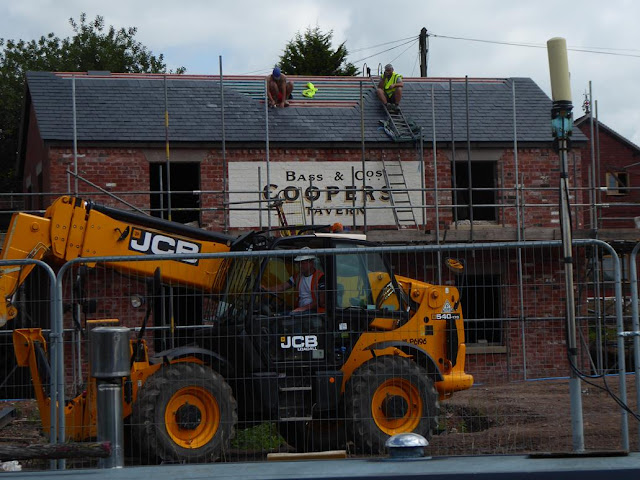 We had had a good run down the locks, but the big question when arriving in Stone is always 'will there be a mooring, never mind two fairly close together?  Well someone was smiling down on us.  As we dropped down the lock before The Star Inn (and lock) there is room for three boats on the right and lo and behold there was just one slap bang in the middle with plenty of room for us behind and Cleddau in front!  Perfect. 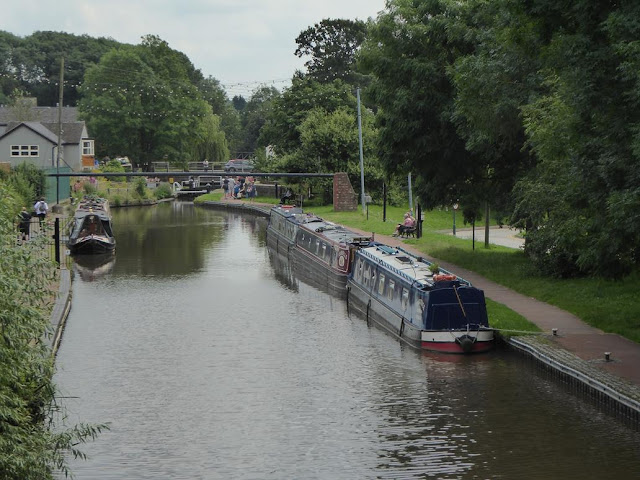 This lovely market town has a farmer's market once a month and it just so happened to be today (the first Saturday of the month for anyone else planning a trip here)!  It opens around 09:30 and we wandered up there shortly after 10am.  It is definitely worth a visit.

The stalls stretch up the High Street and sell many products, both food and otherwise. 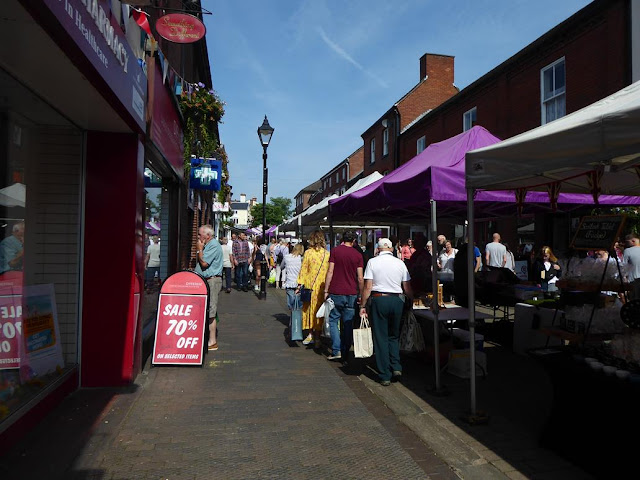 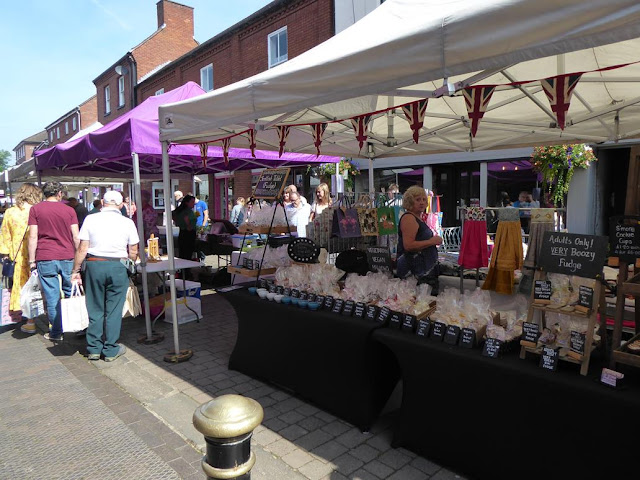 We were delighted to find a stall selling products from the Lancaster Smoke House that we first came across in Glasson Basin.  Strangely enough we had had the last item purchased from them for our breakfast this morning. Kippers!  And very good they were too. 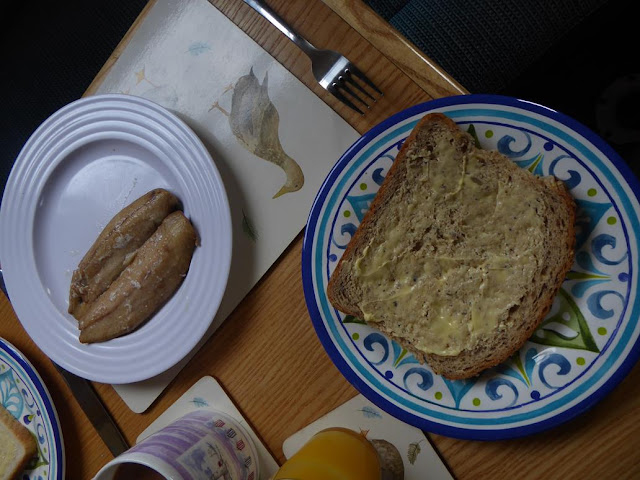 Smoked mackerel, smoked chicken and potted shrimps were the first items to find their way into Chris's ruck sack.   Other purchases from elsewhere included two packs of sausages, a bread and butter pudding (already devoured and very good it was too), a loaf of bread, two Christmas presents, a new mouse mat (for me) and some new table mats for the boat.  A successful morning! I also had my hair cut at a reasonable price - one place I called wanted £55 for a cut and blow dry!!  Unfortunately I was unavailable for the time they suggested!  We lunched in The Crown driven in from outside seating at another establishment by hoards of wasps.  The menu was very limited, but we both had one of the best BLTs we have had in a long time.  The staff were fabulous and the prices good - I would go back.  There was a craft market on in the dining room, but apart from being persuaded to buy a small pack of home made fudge by a lady looking to make a living that way to enable her to stop teaching, I left empty handed.  She loves teaching, but feels she cannot cope with the politics and paper work - so sad.

At the top end of the High Street is some metal fencing with a very brief history of how the town began back in 670AD.  There is similar fencing on the other side of the street commemorating their war dead, but parked cars prevented me capturing them on the camera.

The plaque at the bottom seems to be a later addition although it has names from both World Wars.  All four sides are covered with those lost in the two conflicts.  Reading the names, it always resonates with me how many of them shared the same surname. 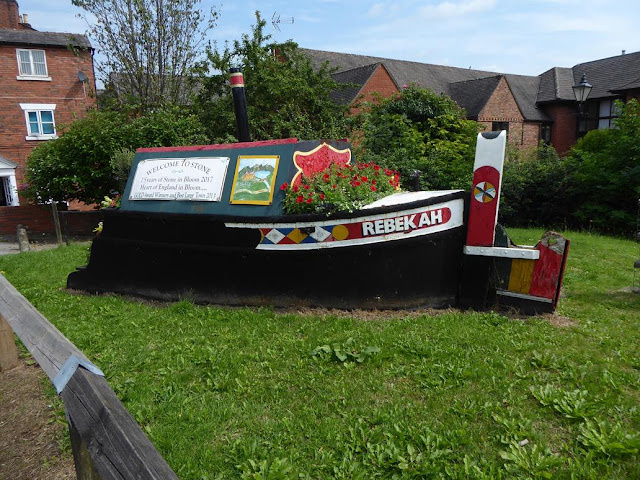 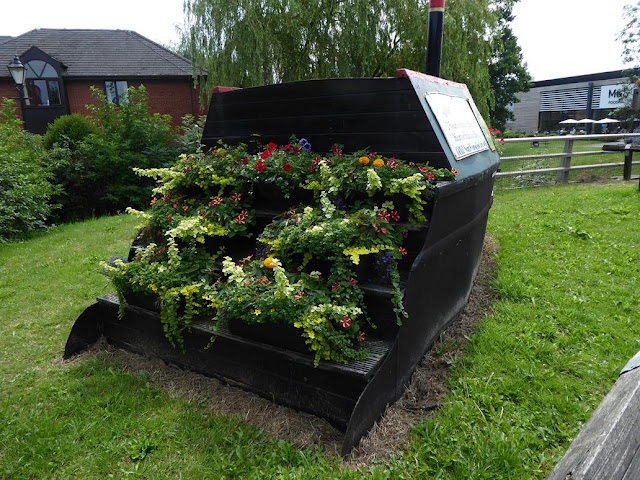 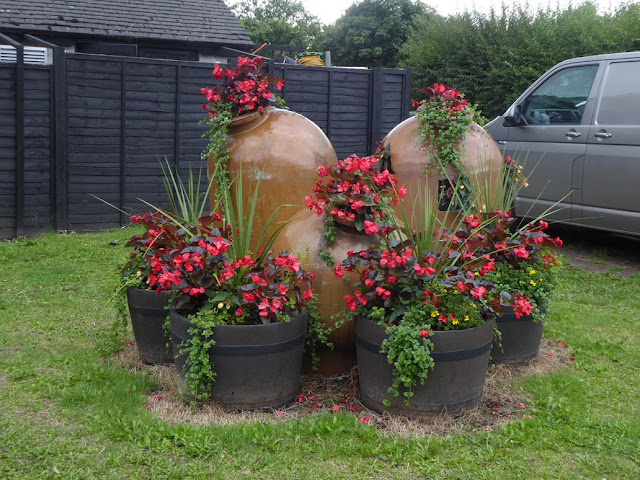 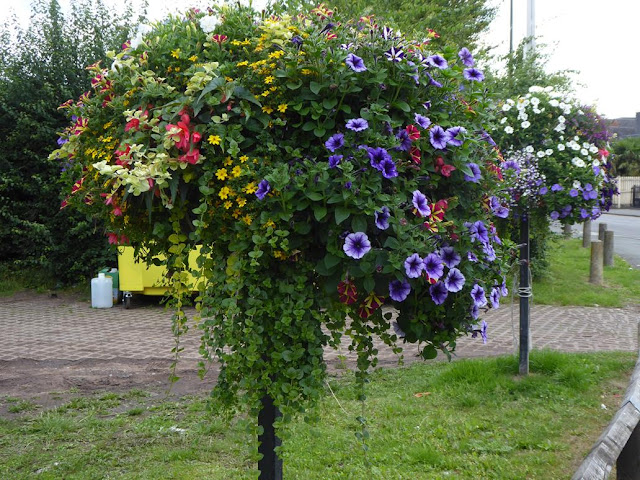 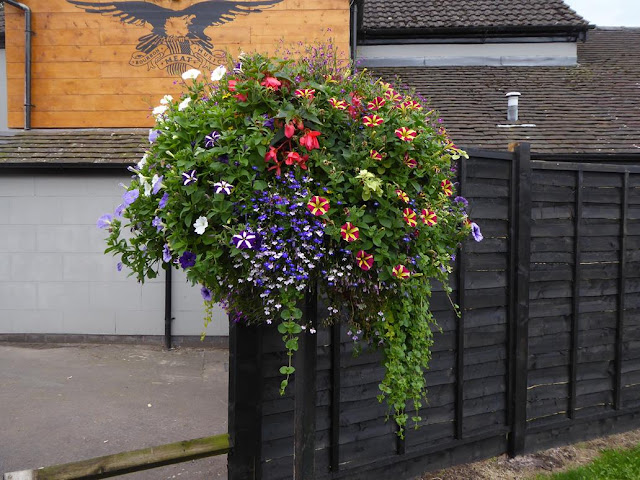 Then there is, of course, the canal.  It must be one of the busiest places on the network as the line of boats travelling up and down seems to be endless from early morning to early evening.  Great sport for the patrons of the Star Inn who enjoy their drinks whilst watching (gongoozling) as boat after boat goes through Star Lock.  That will be us tomorrow, but almost certainly before the pub opens.

It would appear that Stone has always embraced its canal.  When the Stone section of this canal was opened in November 1771, such was the excitement that a canon was fired which sadly demolished what is now Star Lock and the bridge!  An inauspicious start, but the canal has always been an important part of this town and breathed new life into it.

We are moored opposite apartments called 'The Moorings'.  (A rather sad choice of name as along the fences are signs stating "Private Property" and "No Mooring"). 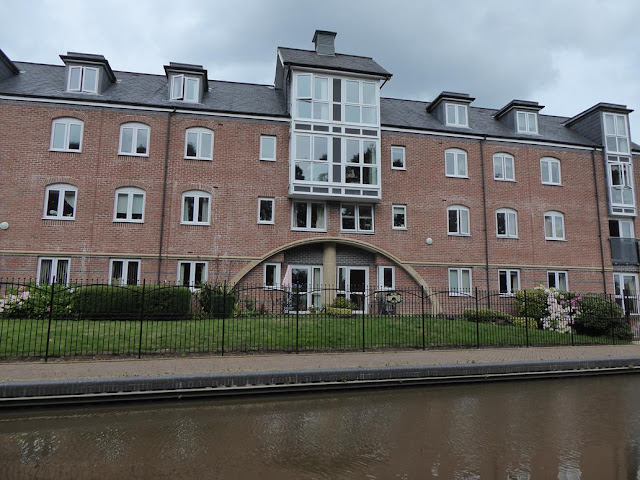 I love the plaque on the fencing 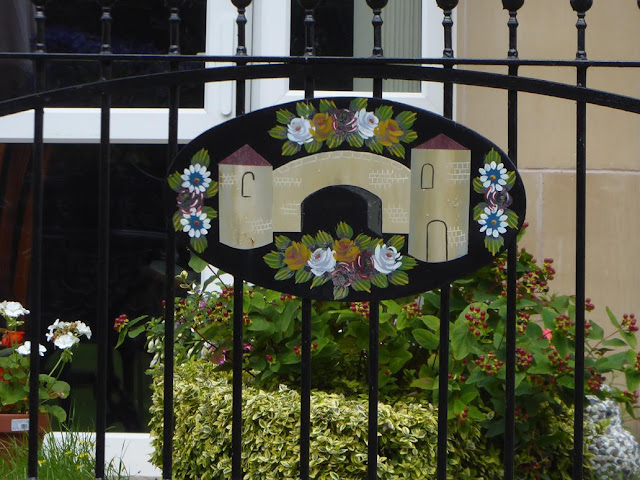 There have been a number of historic boats passing through today - we did wonder if they were returning from the historic boat rally in Audlem last weekend.  I did ask one helmsman, but he was on his way back from Alvecote where the boat had been for repairs.

Just across the road from us is a small park area - we wonder if this is ever used as a outdoor theatre? 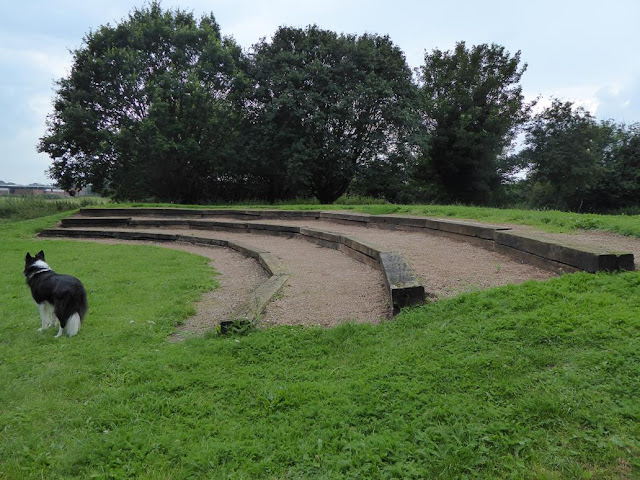 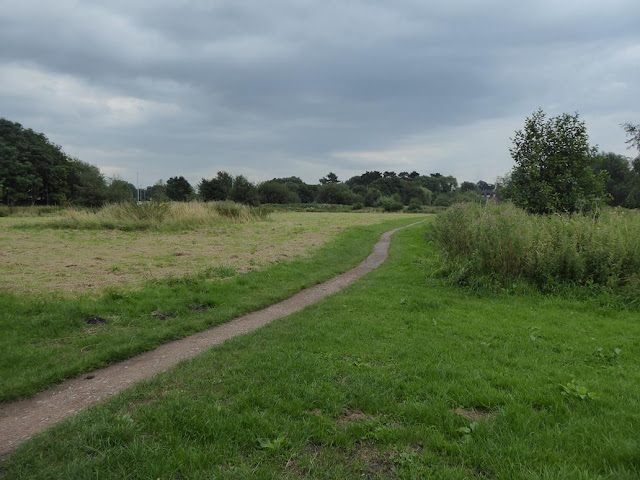 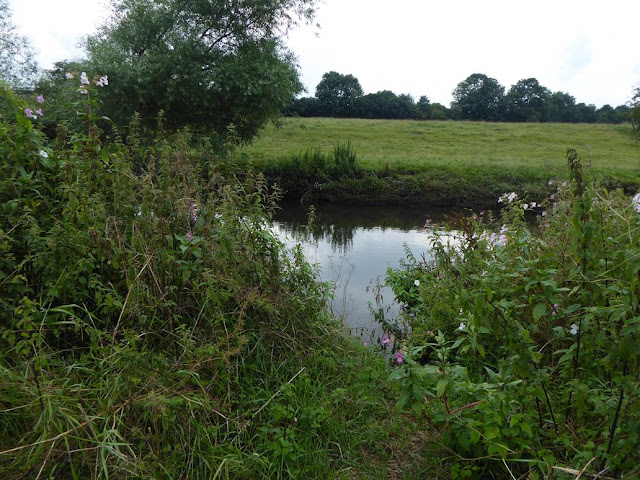 As I type this we have discovered why one should not moor here on a Saturday night - very very loud live music started at The Star Inn at 21:30. It is so loud here that it must be deafening if you happen to be in the pub.  Any guesses when it will stop?  It could be a long night.
Posted by Jennie at 23:30