Most of the time we love this way of life, but every now and then you do begin to question yourself as to 'why we put ourselves through this?' and the next couple of days started out that way.  I think our long day on Tuesday and the early start had caught up with us and we were a little slow getting going.  First stop was Tesco at Cowley Peachey, so it was late morning before we set off with the aim of mooring either below or above Springwell lock.  The weather was with us to start with as we sailed past the Slough Arm - one to explore maybe one day? 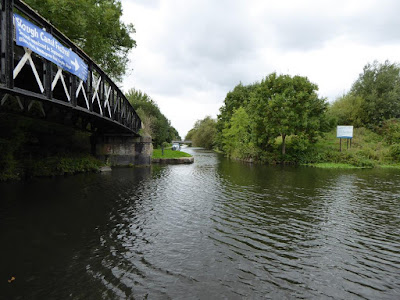 Monty and I had walked to the first lock and as we approached, we saw this cruiser adrift at the bow and was completely blocking the way for Chris.  It was probably a casualty from Storm Aileen. Thankfully there was a fisherman there and he kindly helped me pull the bow in.  Chris chucked us a mallet and we tried to bash the pin back in, but I don't think it would have stayed for long.  The stern was tied to a rather wobbly railing with a pin dangling in the water, so I rather think that it had been moored elsewhere, had come adrift and someone had just tied it to the railing. 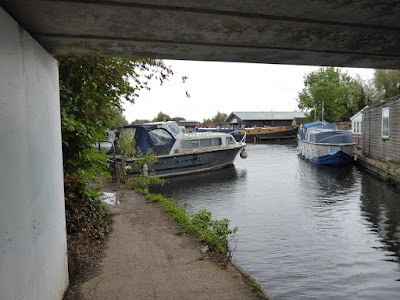 Everything just seemed to be against us - just as we arrived at one lock the heavens opened and, inevitably, the downpour ended just as we finished the lock, soaked and miserable.

Then we came across another casuality from Storm Aileen, thankfully we were able to get past with ease. 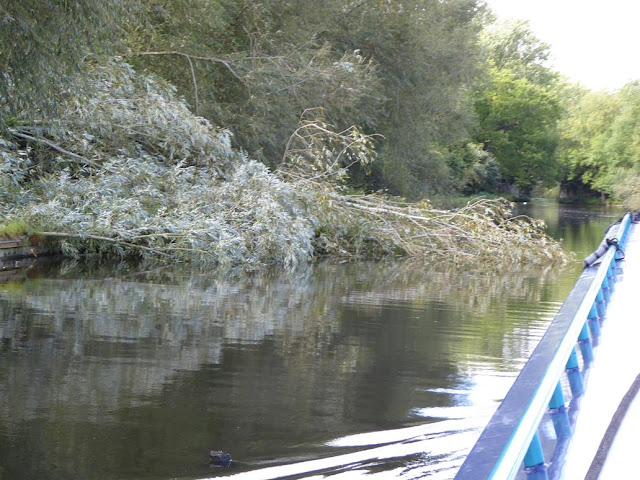 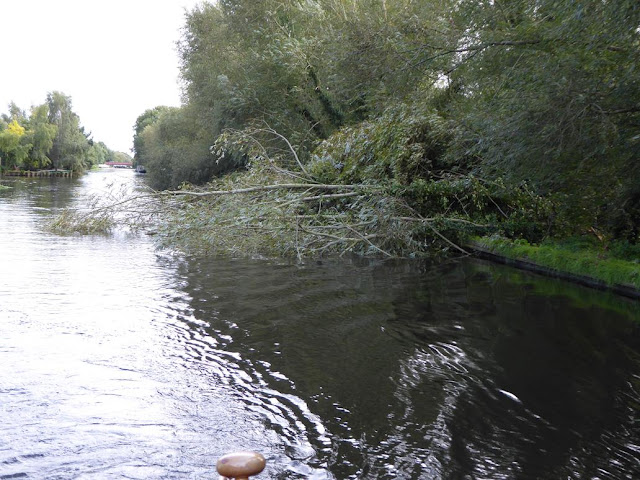 In the end we decided we had had enough, so decided to try and find somewhere to moor and eventually ended up just below Black Jack's lock  some 1.75 miles and 2 locks before our planned stop.  It was not in the least bit scenic and we were to discover in the morning that it is not the place to moor as the water level goes up and down.  By the morning we were definitely aground and on a tilt.  This was our view across the canal - there are permanent moorings all along the stretch.  The one directly opposite us had his very noisy generator on to 10pm. Then there were some very angry words exchanged with someone else and to cap it all another boater decided to play loud 'head banging' music for us all to share!  Note to self - never more below this lock again. 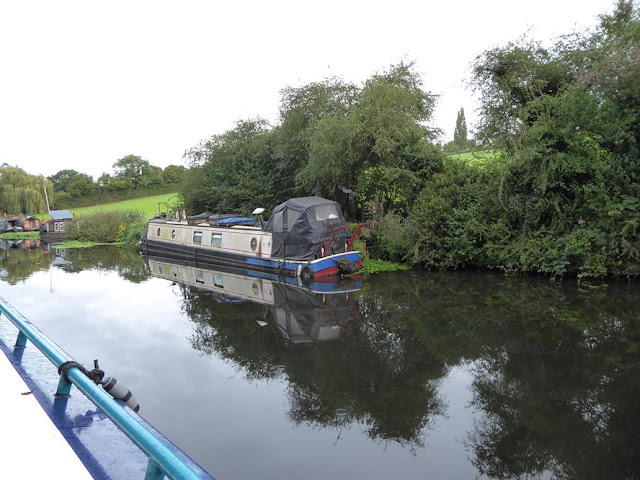 Beside the boat across the back of the towpath looked like an interesting walk, but not for us today - we had had enough. 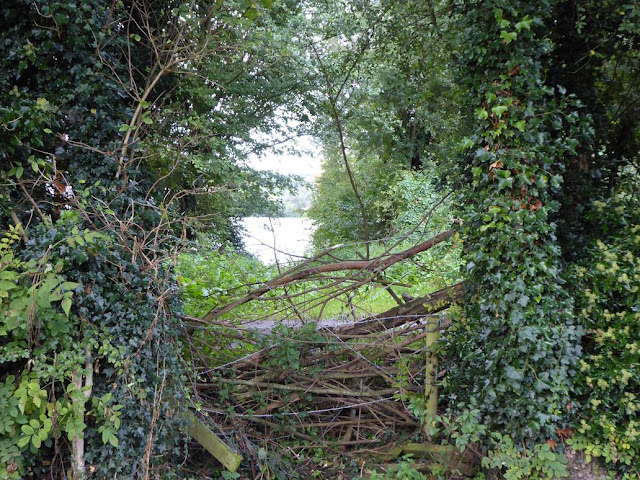 It took a short while to get off our mooring - time enough for me to go and prepare the lock which was full.

When we came through Black Jack Lock two years ago, this property was for sale 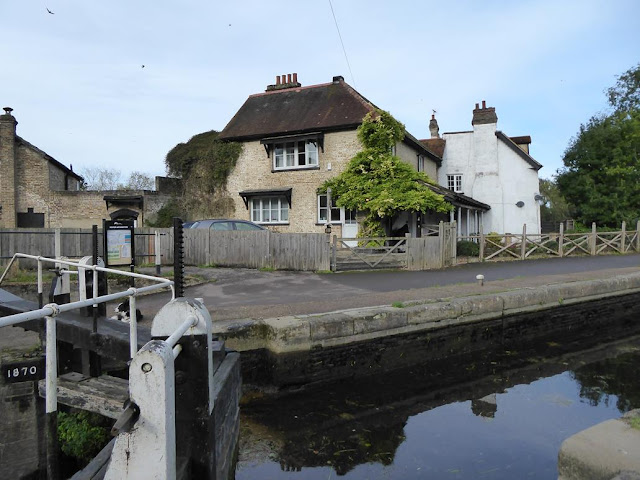 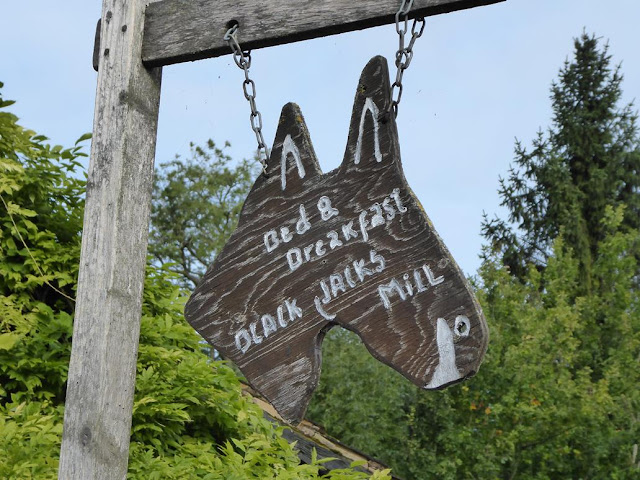 This chap is still guarding 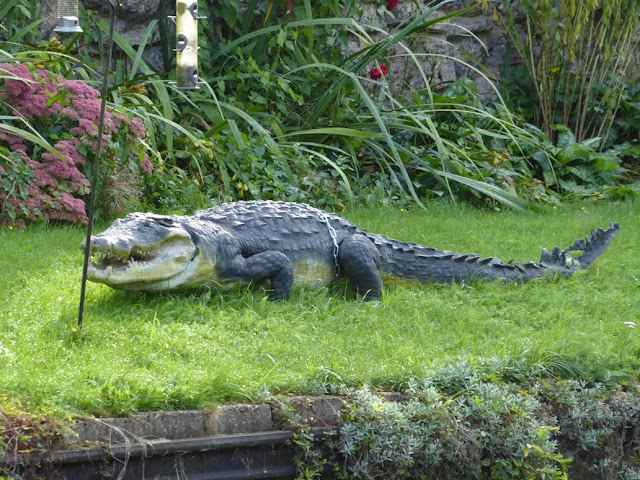 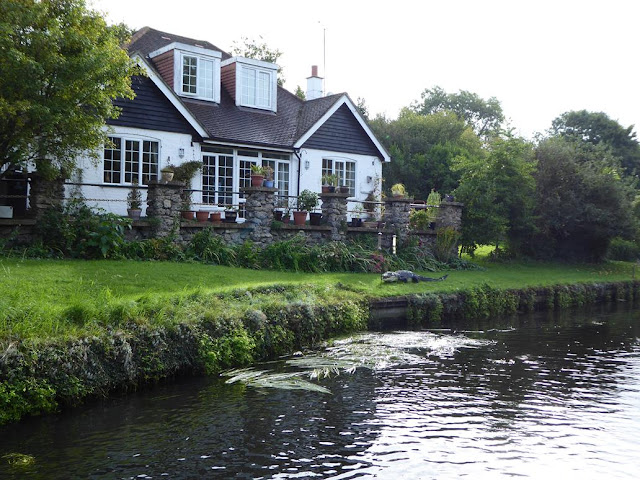 Once through the lock we realised that if we had just come through last night it was a much better mooring with more water. 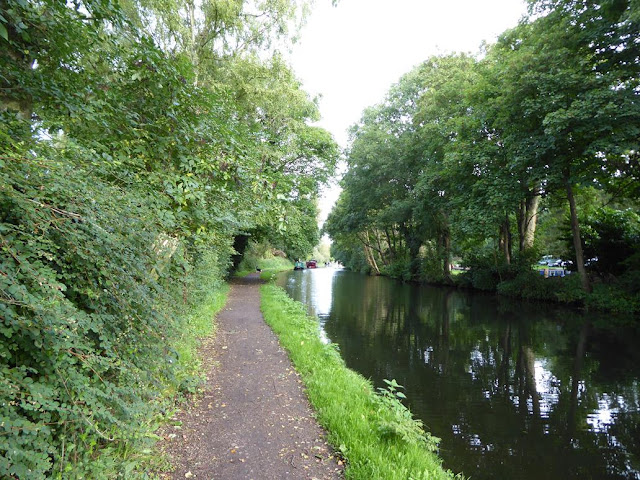 We had just three more locks to do today, however not only were they full but every one of them had the top gates wide open and the paddles up on the towpath side.  We are assuming we were following a lazy widebeam who just used the boat to open the gates and blithely sailed away. 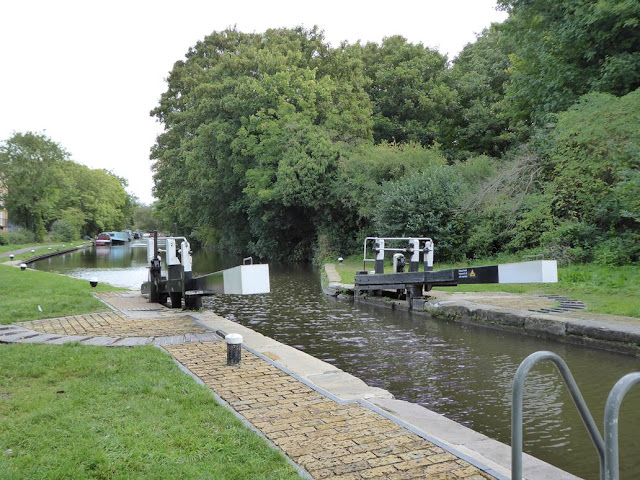 Then to add insult to injury at Springwell lock this happened - a sight all boaters dread - a visit to the weed hatch.  I suppose it gave me plenty of time to get the lock ready, but I am sure Chris would have preferred to just wait! 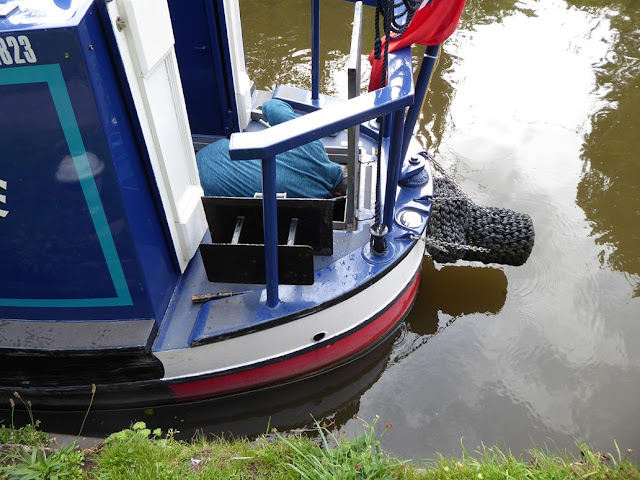 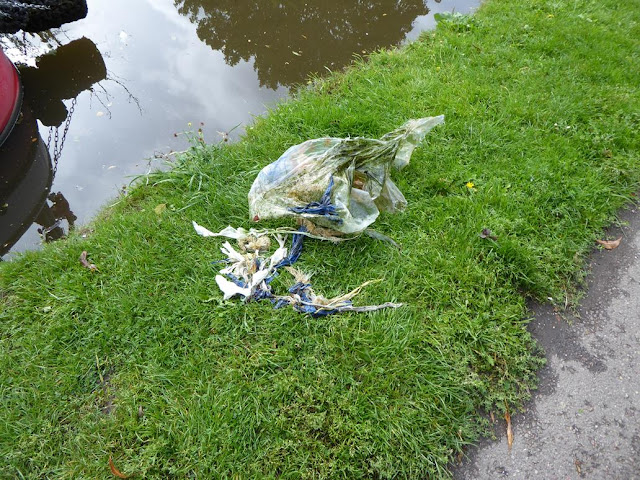 This was where we were supposed to get to Wednesday evening, but it is just as well we stopped as the moorings were definitely full. 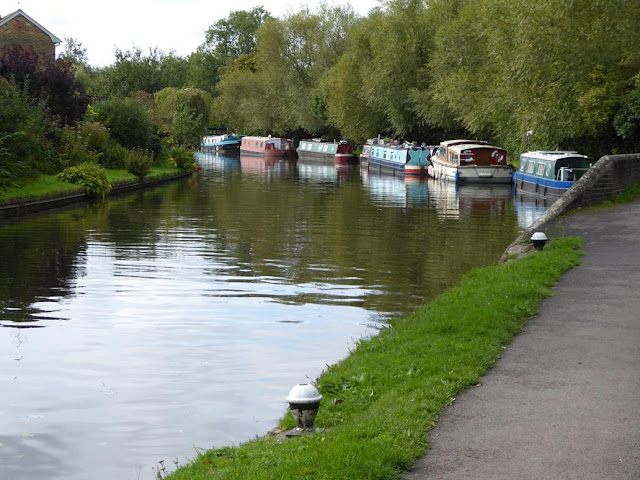 On again to the last lock of the day to find this canoe full of water, abandoned and as we arrived, it was in the middle of the lock landing.  Our boat moving sent it on it's way, but we were beginning to wonder what we were going to come across next. 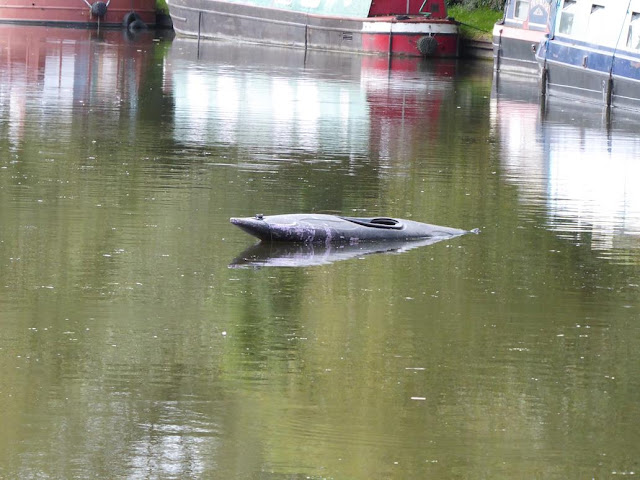 Our target was Tesco at Batchworth where there was plenty of space.  A top up of fresh stuff and much to our surprise the one space on the opposite side we spotted as we arrived was still empty, so we pulled across and squeezed in closely watched by the cruiser owner moored behind us. 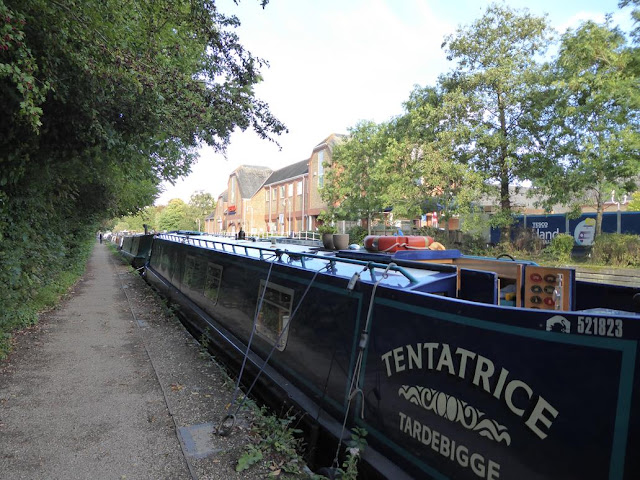 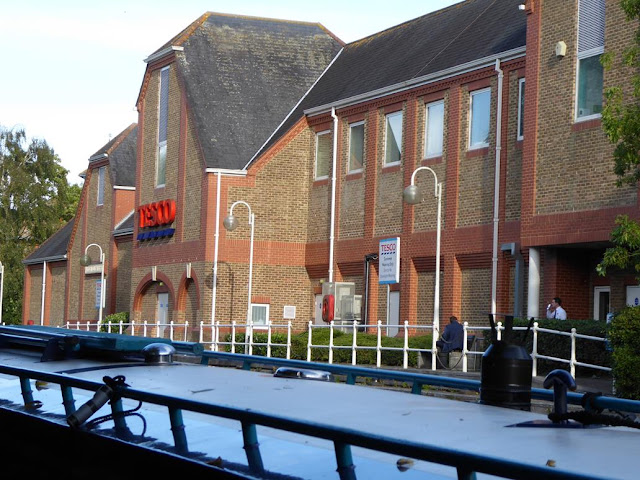 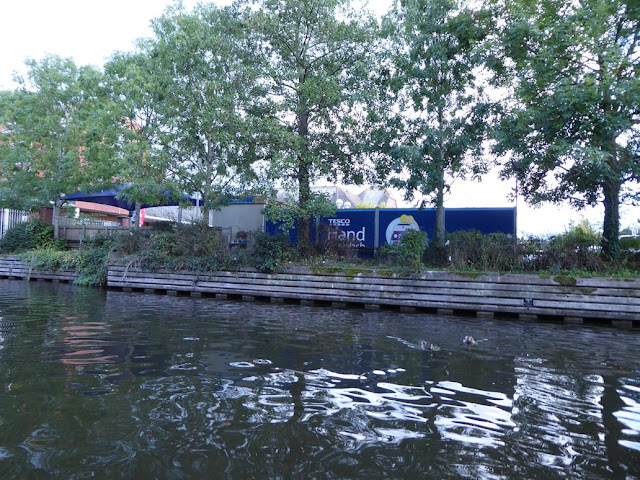 and we didn't get much of a sunset, but it is quiet and we have water under the hull. 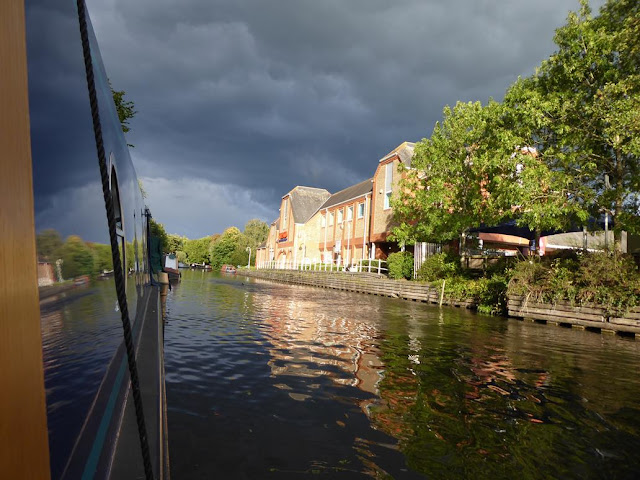 The Tesco moorings state quite clearly that they are for shopping only and no overnight stays - the red boat at the far end arrived mid afternoon and, as I type at 10pm, it is still there! 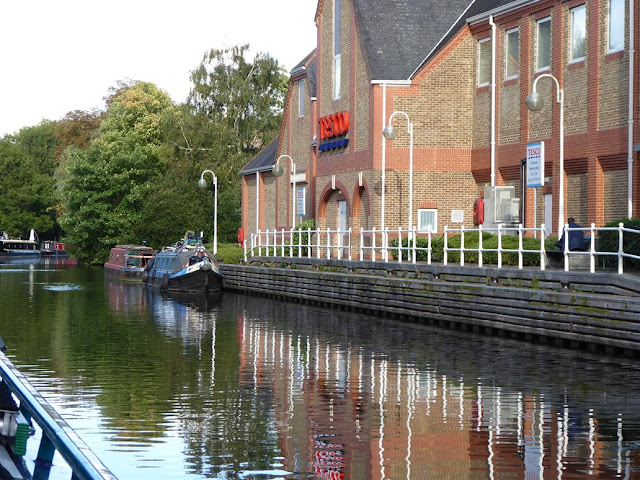 To be honest we are not enjoying this part of the GU and cannot remember so many moored boats, most of which are in a really bad state, when we were here two years ago.  Maybe it was all so much easier as we were travelling with nb Cleddau - two boats are definitely easier than one - we miss you Sue and Ken!

And the knee - well I am still on light duties (no long Monty walks) as it is still not quite right.  I  invested in a crepe bandage yesterday which does help, but the  knee clicks as I walk and still bends the wrong way every now and then, but I am no longer in pain, which is a great relief.
Posted by Jennie at 14:33

Sorry to read that the Grand Union, far from being a relaxing cruise route, is presenting a few challenges! Still, the summit must soon be in sight and then it's downhill past the Marsden reservoirs and into Bedfordshire! Hope your knee is dance-fit by next weekend, Jennie...

I hadn't thought about the need to dance, Sue! We have had a better day today and moored 6 minutes before the rain started! Jennie