First, briefly to the weekend which was a great success.  It was lovely to see our daughter and her youngest son, Jamie aged 5 on Friday.  George (9) was out with his Daddy at a gymnastics class.  They arrived home as we left, so it was a hurried 'hello' and 'goodbye'.  Shoes were bought, so we now both have dry feet, appointments kept, we spent Friday night in the house (our house insurance insists we spend one night there every 60 days) and we were off to Bedford on Saturday.  At 4pm we, along with around 40 other friends and family of the birthday pair, boarded The John Bunyan boat for a cruise along the River Great Ouse. 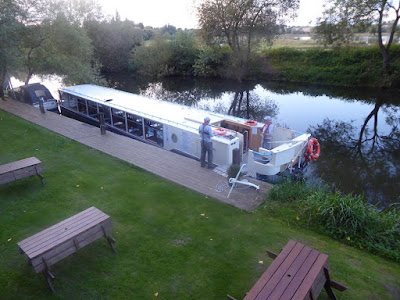 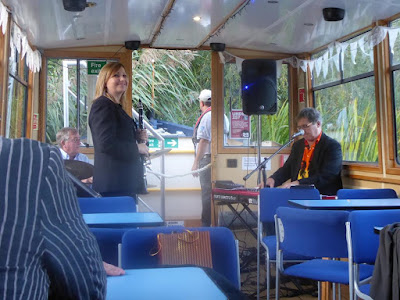 and a cream tea - the scones were really good. 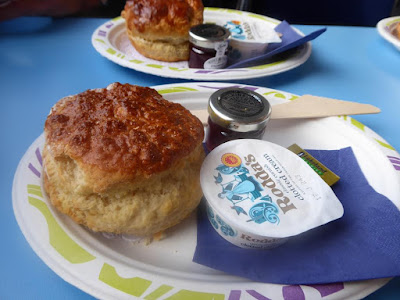 Why were we there?  To celebrate a double 70th birthday - Sue (Boatwif from nb Cleddau) 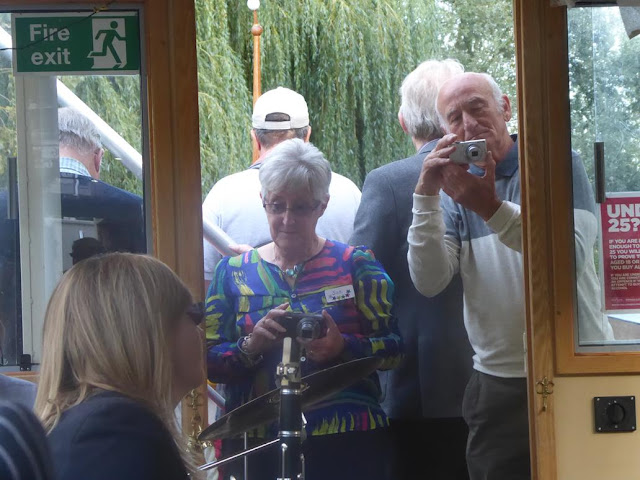 and Ken (The Captain) 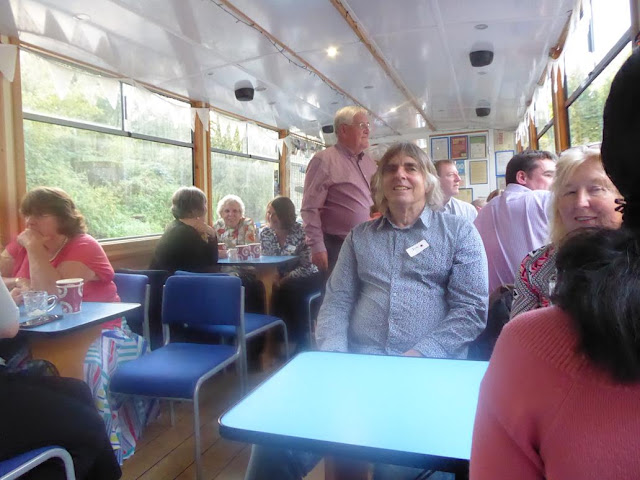 The trip took us all to a place called Danish Camp 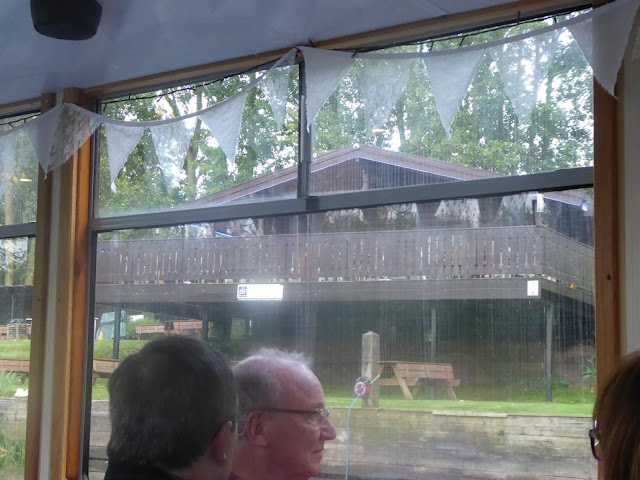 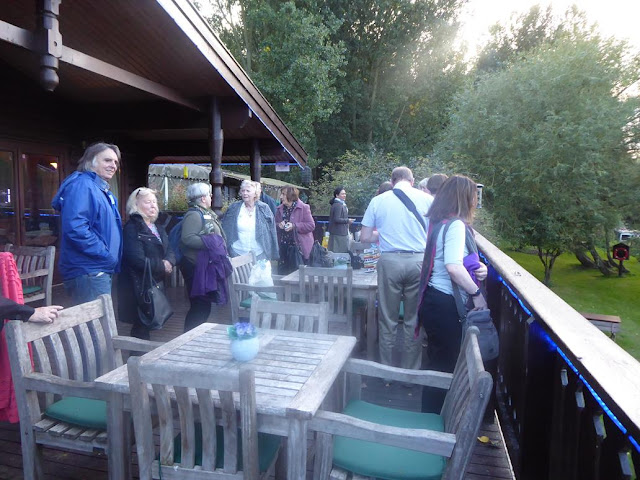 Before we went inside for a dinner which was followed by dancing before a coach took us all back to Priory Marina.  A fantastic day and many thanks to them both. 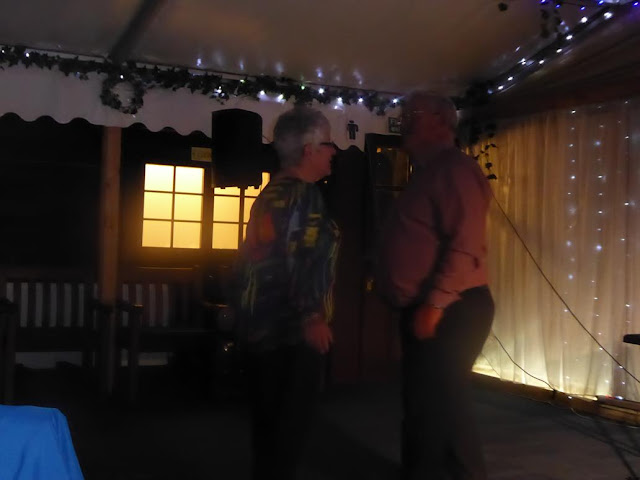 After a good nights sleep we headed all the way back to Bromsgrove to collect Monty and then went back to Grove Lock Marina. Chris drove just over 400 miles in the three days, but it was worth it.

We had intended moving across to the other side of the canal on Monday, but it was pouring with rain and we did not feel like doing battle with the reeds, so we paid our money and stayed in the marina making good use of the electric hook up to get the washing done.  To be honest we were both tired and were glad to have a day off.

What a difference a day makes - this morning the sun shone and it was delightfully warm.  Before we set off, Martin, a resident cat, thought it would be a good idea to visit our boat, until he saw Monty!  I have to say that Monty has learnt not to chase cats, but he can give them a good evil eye.  At one point Martin had his front paws on the button fender in an attempt to board, 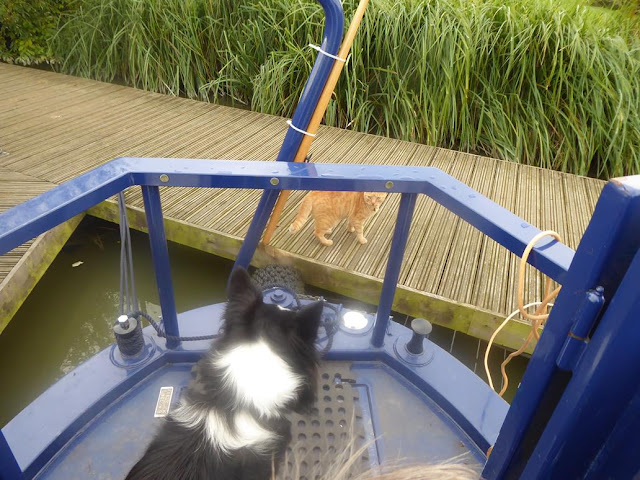 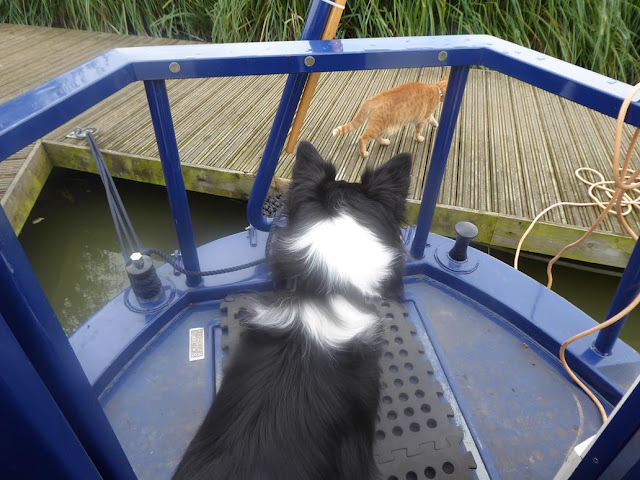 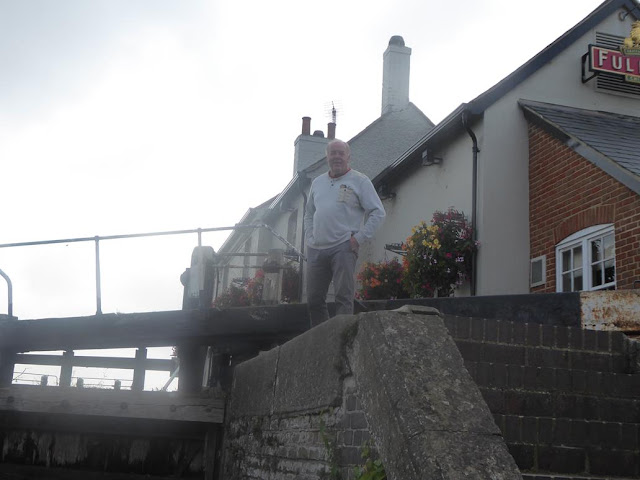 and Pam - our companions from last week.  Thank you both for your help today and safe travels when you move on. 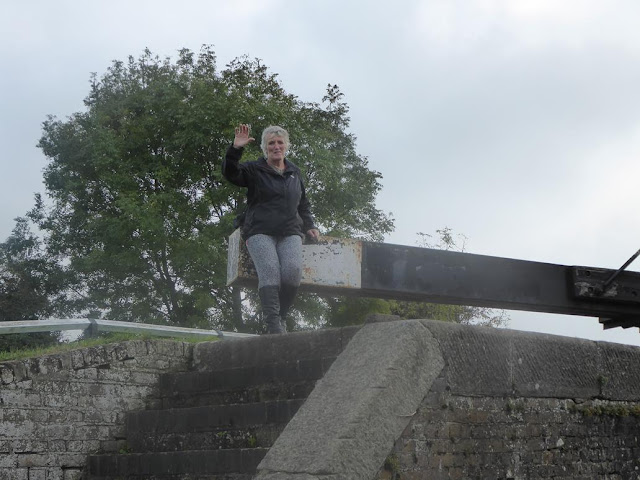 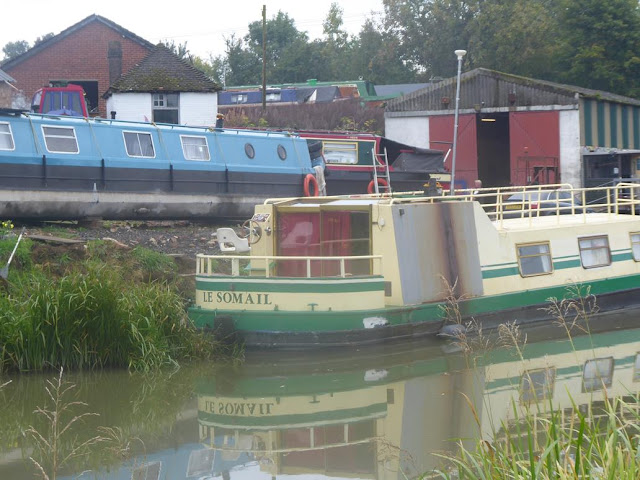 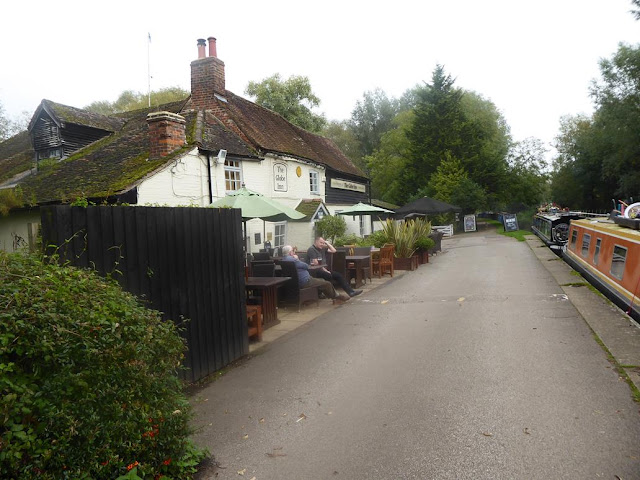 and it pulled Tentatrice in - Chris assures me he did not have the power to stop her, especially as there was a Tentatrice sized hole on rings right outside the pub!  Years ago, Sue and Ken had nb Cleddau moored on this canal and we did quite a few trips with them and it was always when Chris was steering that the magnet at the Globe drew Cleddau in.  We stopped here two years ago when the two boats were travelling together only to find the place was not what it used to be.  We thought we should give it another go and I am glad to report we both had a really good sandwich for our lunch. 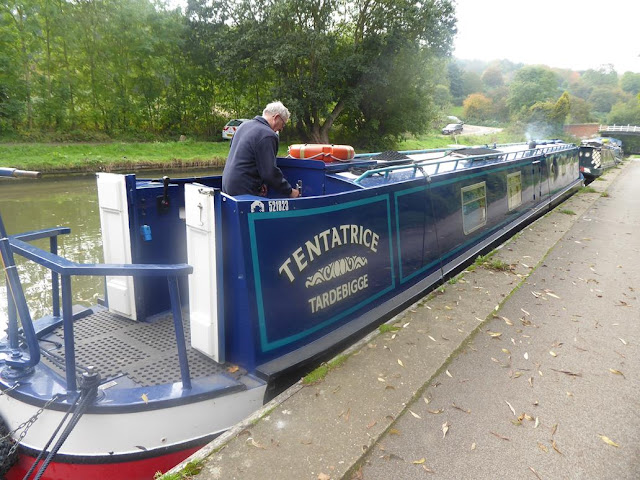 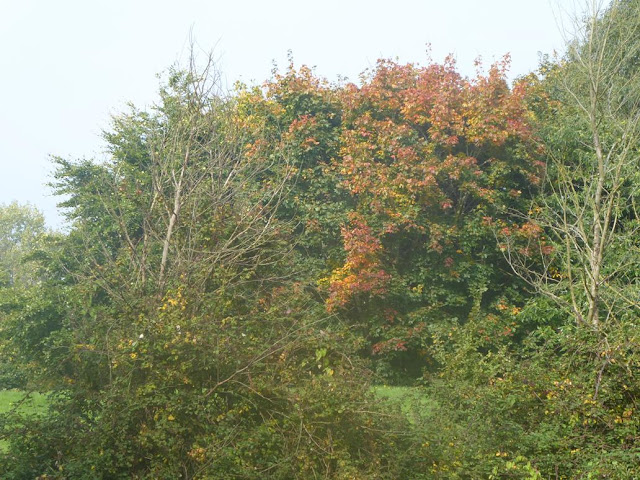 The views were rural and it was utterly peaceful - no traffic, just birds singing in the trees, the boat engine turning over, the water rippling under the bow and the occasional train way in the distance - bliss 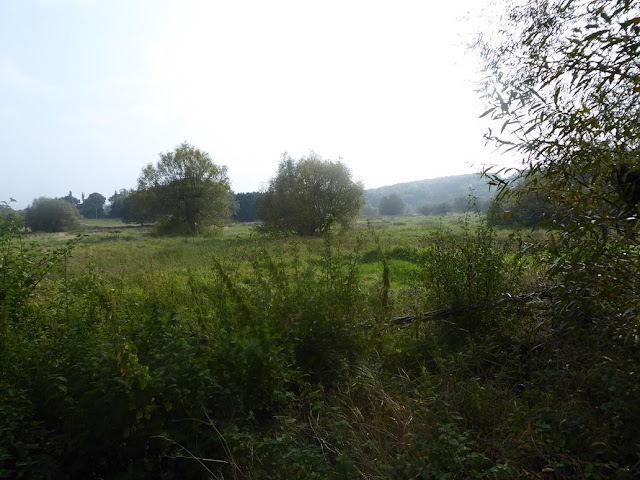 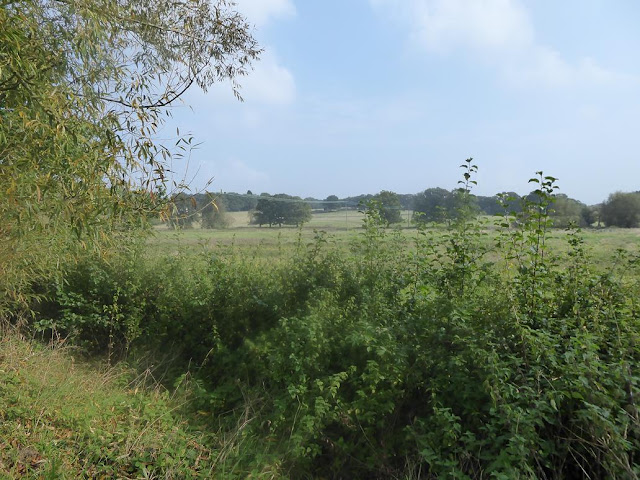 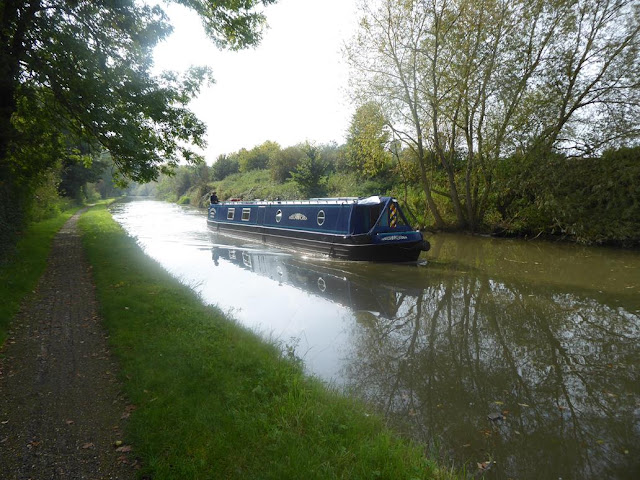 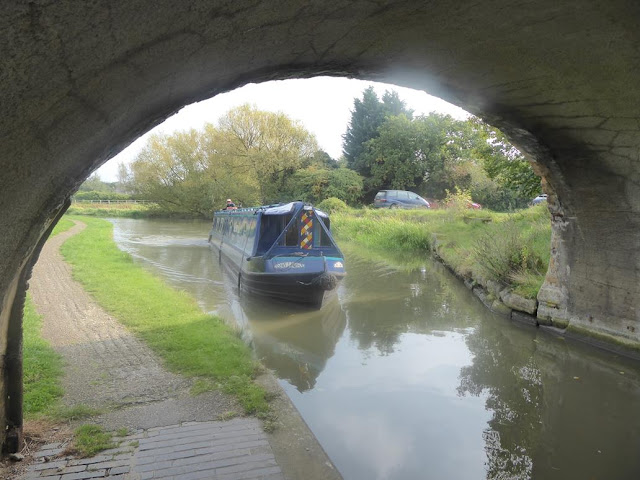 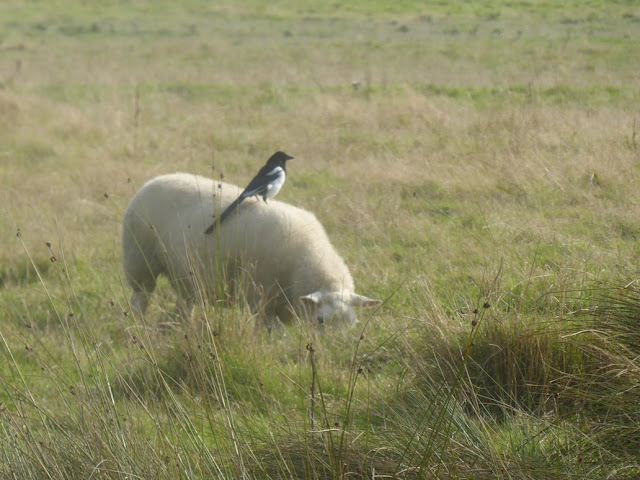 They are certainly doing a lot of dredging along this canal. 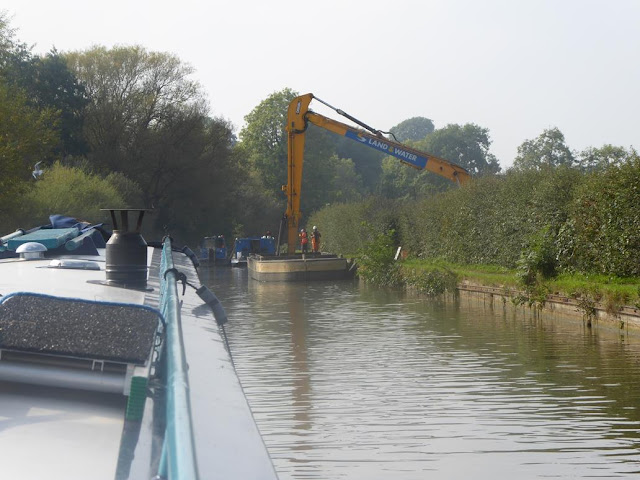 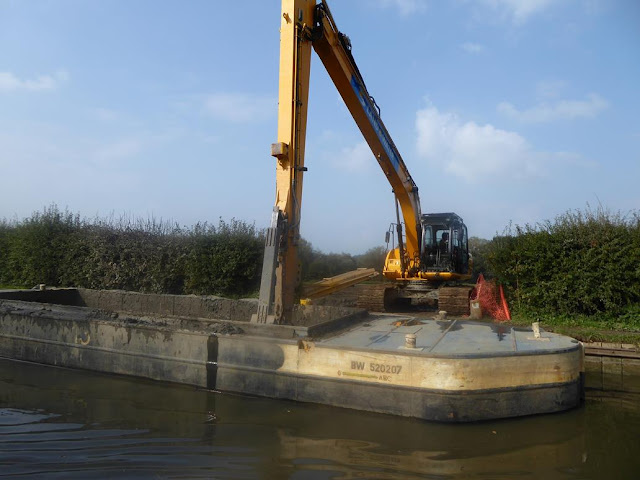 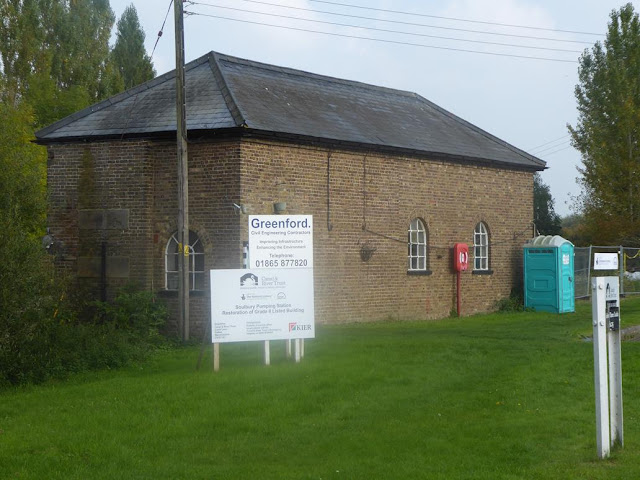 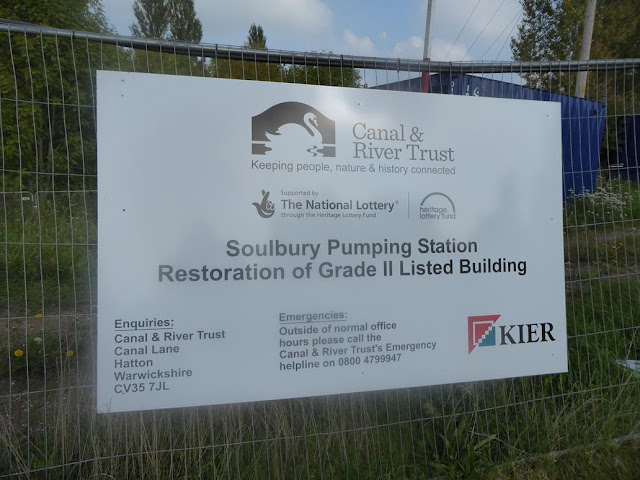 There were boats coming up as well as us and a hire boat with a crew from Vancouver Island, Canada going down.  That is one of the real pleasures of this way of life - meeting people from all over the world and having brief conversations before you go your separate ways. 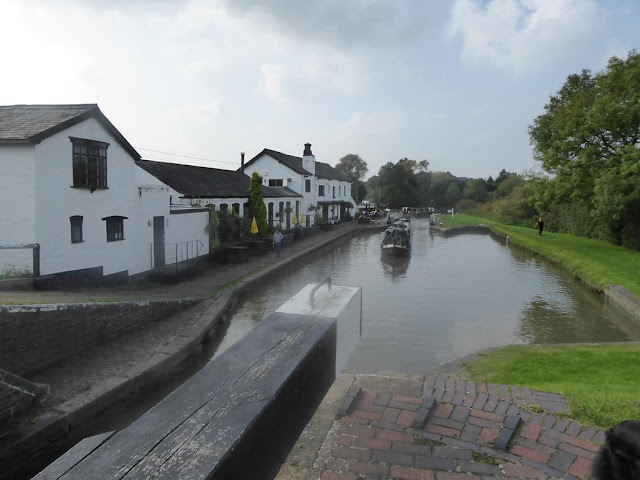 How's this for a paint job?  I love it 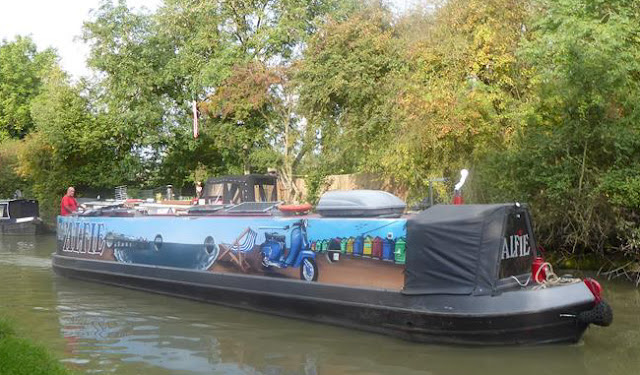 and this is the other side 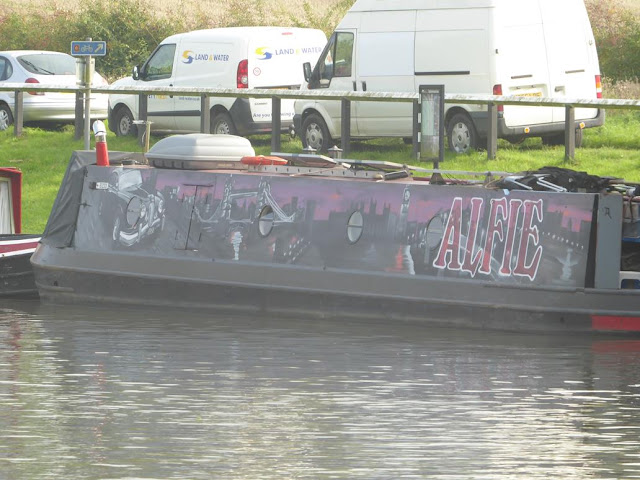 Just below the locks are moorings with rings with just enough room for us. 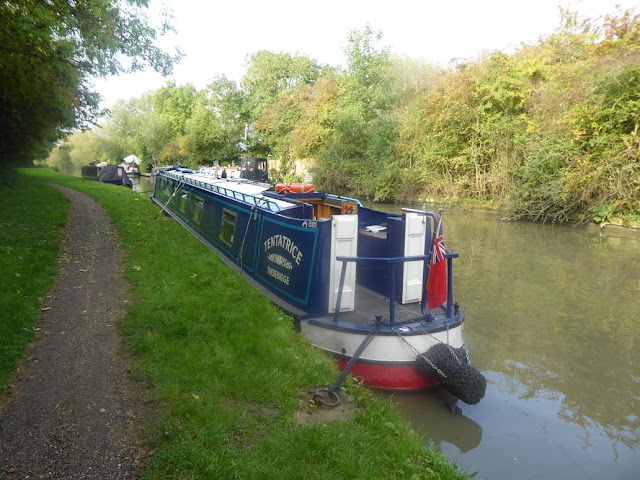