Five and then there were six, seven, eight, nine, ten and yet more!

Last night's sky did not lie - it was a beautiful morning and we had new neighbours.  I suspect it was one of them who went for a swim yesterday. 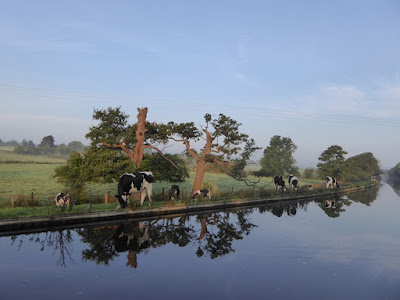 We were moored overnight about 100 yards before the first lock and we left about 15 minutes too late.  Suddenly there were boats everywhere.  We started out as number 5 in the queue and it took 1 hour 5 minutes to get into the lock!  Good job we were not in a hurry. 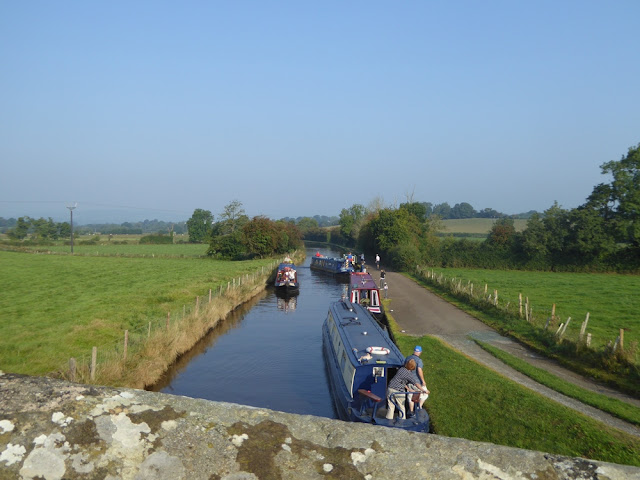 They were coming up as well as down and they kept coming.  When I last looked there were at least another five or six behind us with yet more coming round the bend.  Thankfully there were only two locks to do today, so no real problems. 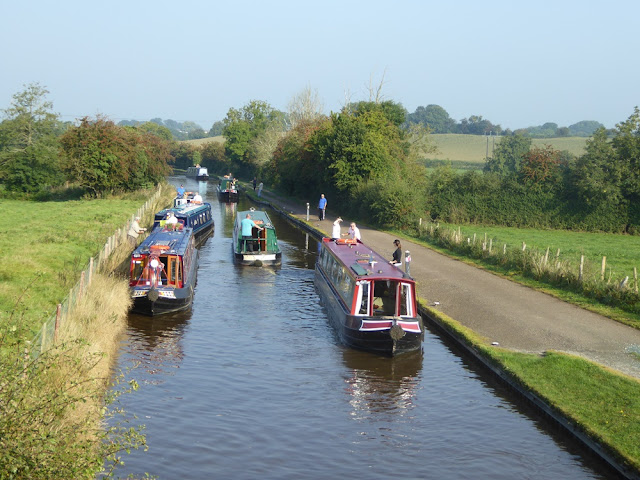 Our plan today was to stop at Frankton Junction so Sue, the dogs and I could walk down the first part of the Montgomery Canal.  The delay actually worked in our favour as we arrived at midday when the Frankton locks are open.  Passage has to be booked ahead and is only available from midday to 2pm.  As we approached there was a boat in the lock and others waiting to go down. 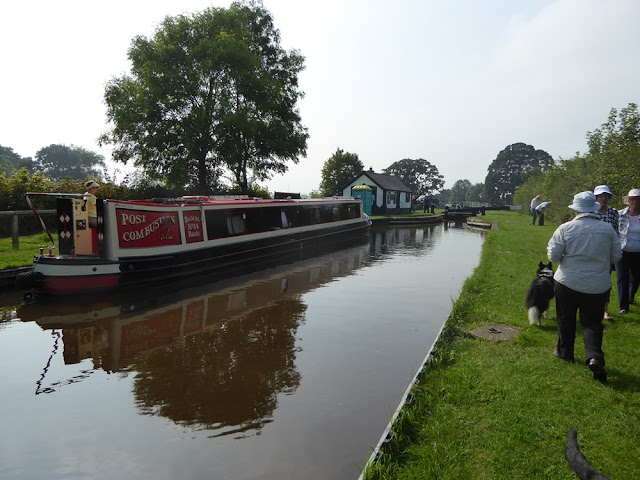 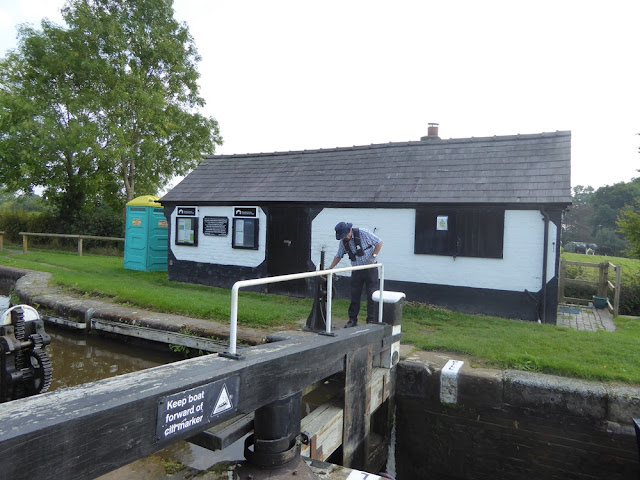 displays information about the restoration of these locks. 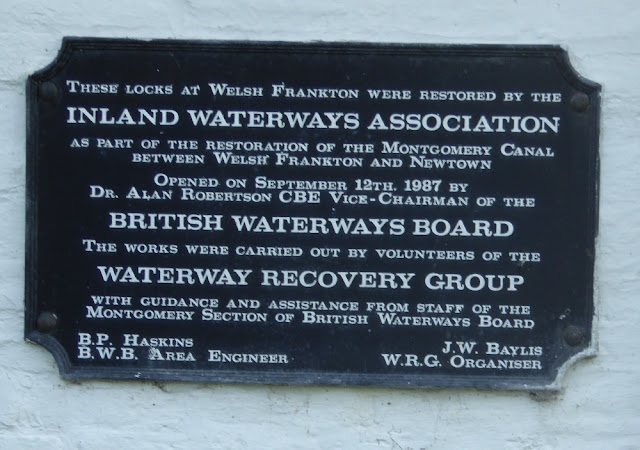 The views are far reaching 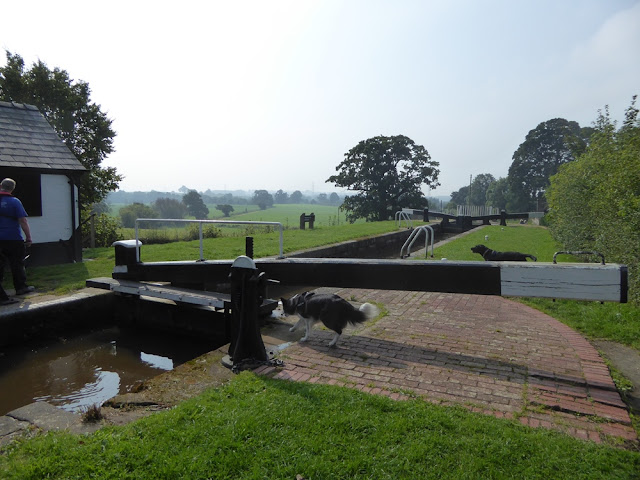 and how is this for a fabulous house, presumably originally a lock keepers cottage 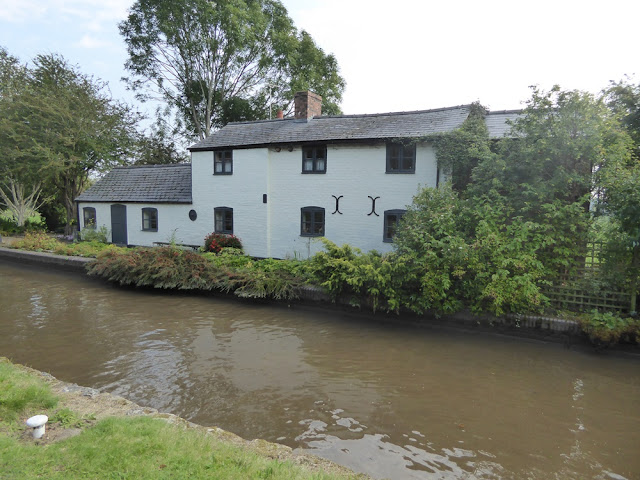 There were boats coming up as well as going down 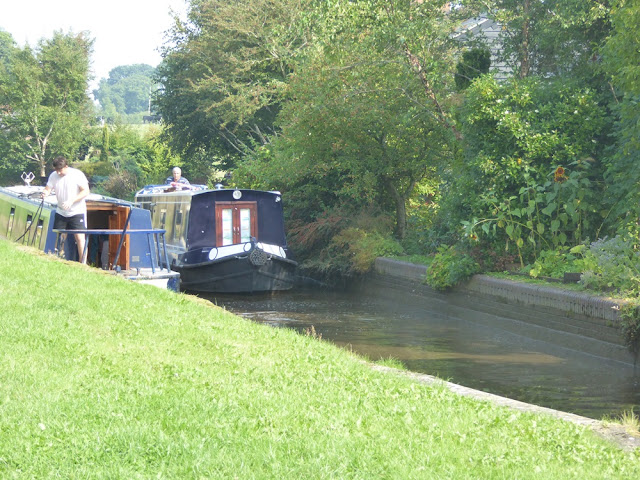 And yet more waiting at the bottom 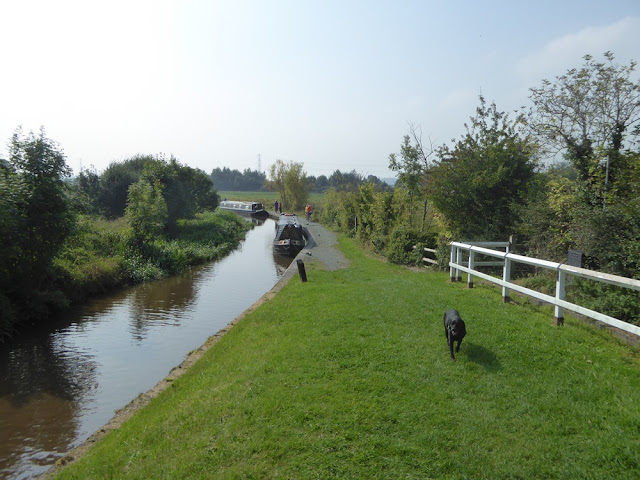 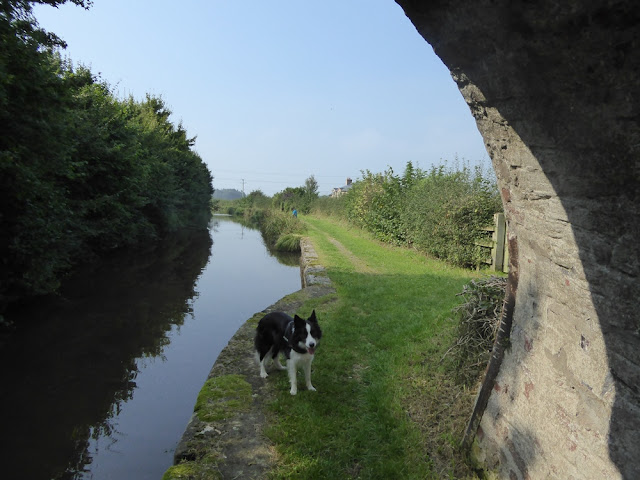 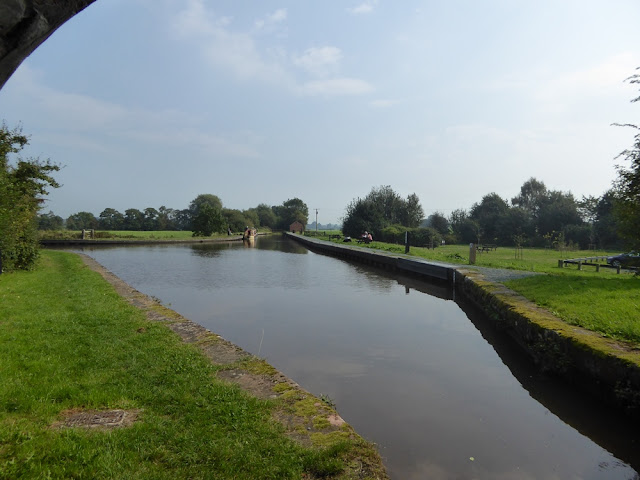 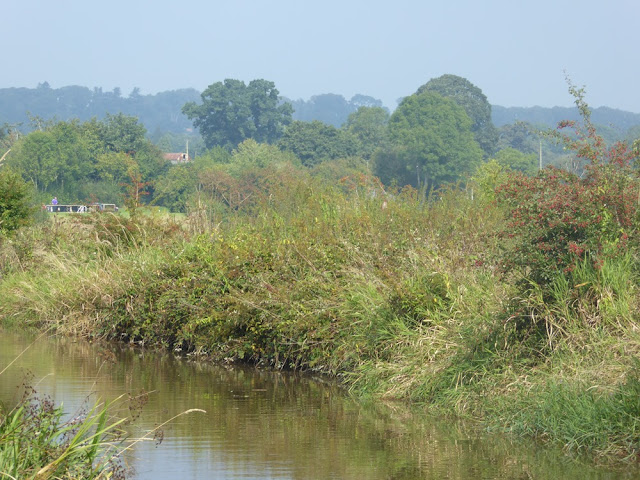 We arrived back at the staircase locks 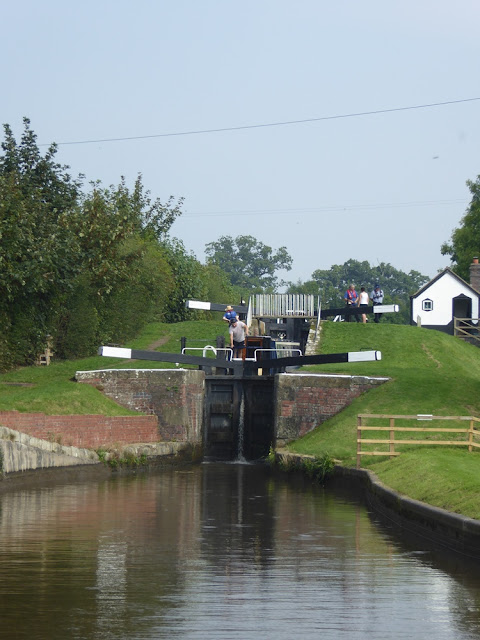 to find a strangely quiet boat being hauled from the bottom to the top lock - the engine had just packed up.  I heard the immortal words 'I will go and phone Dad'!! 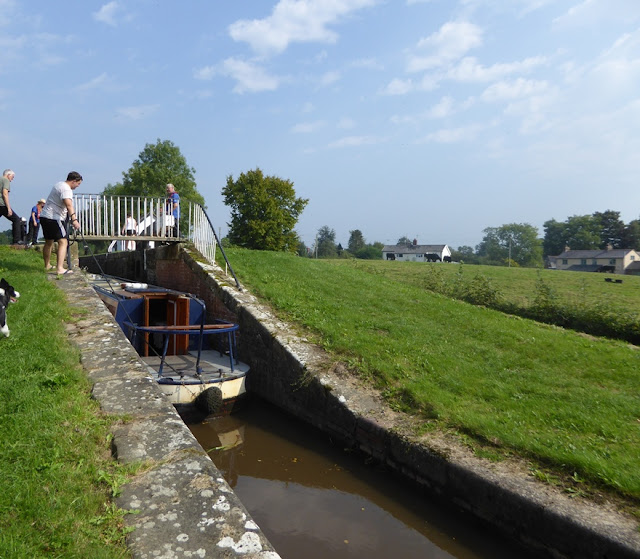 I think it is a canal to put on the 'to do' list one day.

Chris was in mid repair mode when I got back - trying to put new catches on the cupboard under the bathroom sink, so Cleddau went ahead of us.  The number of boats we passed was too great to count, but there was a solid line of five nose to tail at one point. 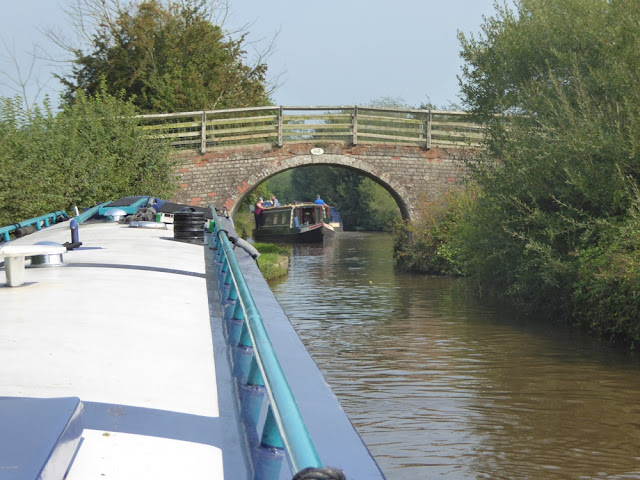 Sadly disaster struck again - there was a cry from the back deck 'I don't believe it, but it has happened again'.  Chris' spare pair of glasses had followed the first into the canal!!  He has prescription sunglasses which were unearthed and string attached to stop pair number three from disappearing over the side.  An urgent trip to an optician is on the cards. 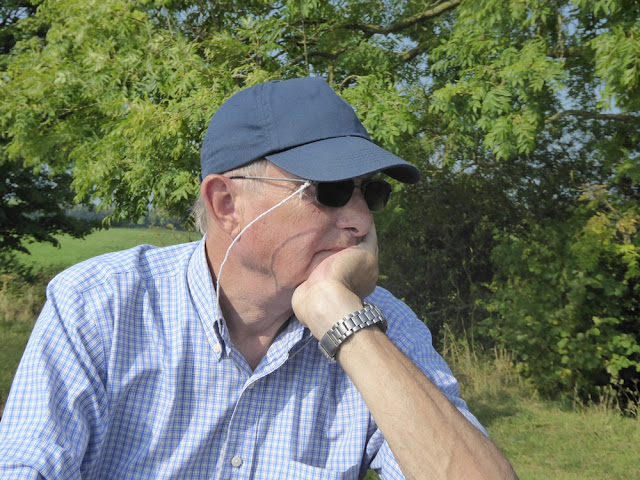 We stopped at the service area in Ellesmere which has sprouted scaffolding since we were here last week. 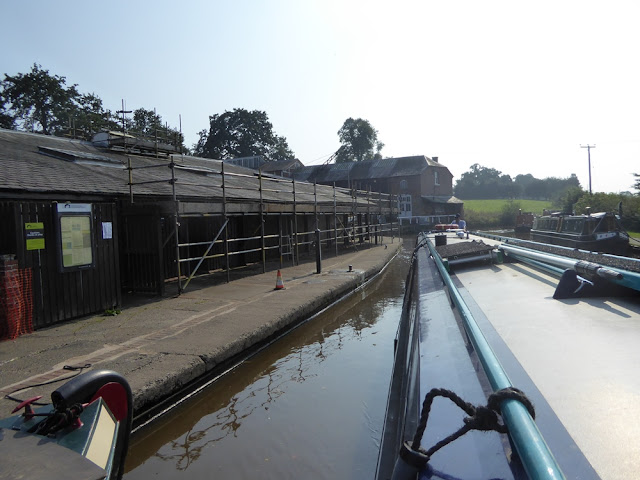 Cleddau was moored in the arm.  Ken came to meet us with advice that there was a hire boat moored in the winding hole, so Chris made the decision to reverse in. 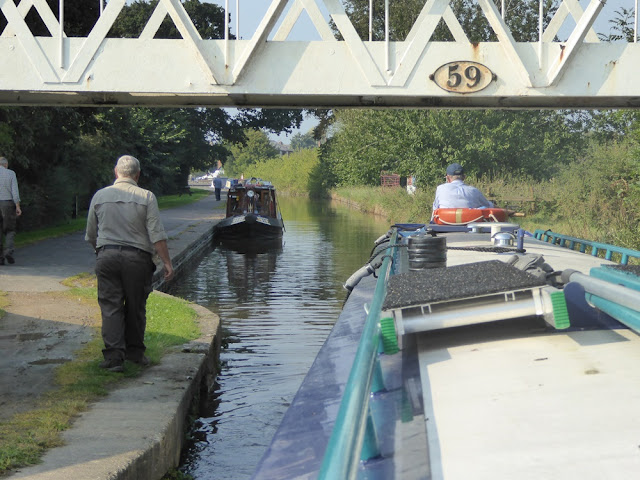 Sue had the kettle on, so a very welcome cup of tea and Welsh Cake were enjoyed in glorious sunshine. 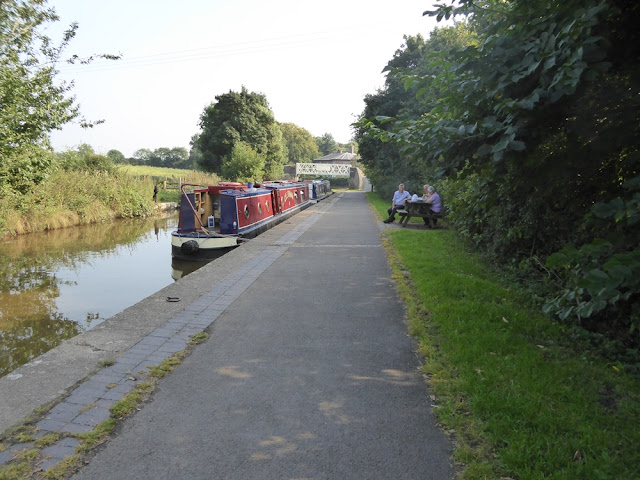 And tonight's neighbours are not so different from those we had this morning.  We are only moored a hundred yards or so from last week's mooring, but that small distance makes all the difference - we have internet, phone and television. 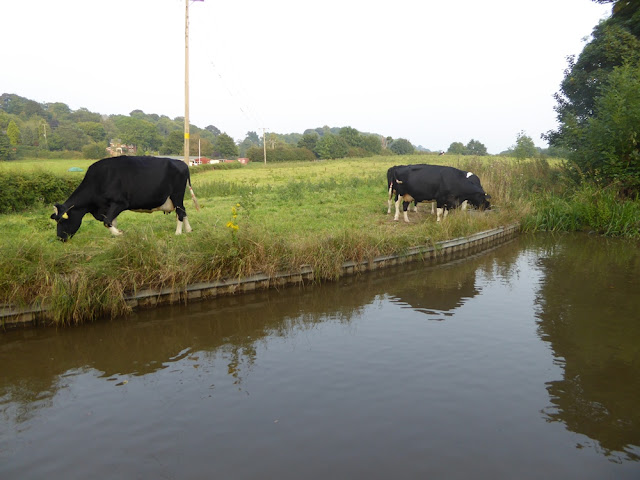 You must do the Monty -- fantastically quiet after the Llangollen. And the pub at Maesbury Marsh, the Navigation, is one of the best we've ever been to.

I am sure we will Adam. Sorry about the delay publishing this - we were in an internet desert.