I know many of you who may read this will have followed Pip Leckenby's (nb Oleanna) work on the set design for this production.  Sue (Boatwif from nb Cleddau) and I have been avid followers for many years and it was decided that, this year, we should go and see for ourselves.

Step One - book 4 tickets which included a stage tour so we could see all Pip's work close up.  We were early enough to get Row C in the stalls.

Step Two - book two rooms nearby that, if possible, were in easy walking distance to the theatre.  I researched many of the local hotels and was about to hit 'book' when I decided to have a quick peek at past reviews.  They were pretty dire - one stated that 'when as we checked in and they issued us with a small tablet of soap, we realised we may have made a big mistake'!  In the end we decided we would find a Premier Inn and drive only to find out that the latter is just 0.2 miles from the theatre!  Booking made and all we had to do was sit back and eagerly anticipate the event.

Ken was due to have a hip replacement after Christmas, but was offered a cancellation four weeks prior to the theatre trip.  Whether he would make it was in the balance until the last minute, but I am delighted to say he did.  The easy walk there and back became even more important.  We arrived at the hotel within 5 minutes of each other, booked in and made our way to the theatre for the 4pm performance.

Was it worth the trip - 'Oh yes it was'!  It was a 'real panto' with lots of corny (but clean) jokes, 'boos', 'Look behind you', 'Oh no it wasn't, oh yes it was', some singing with actions, sweets for the children, 'shout outs' to audience members including to 'Ken and Sue the Cleddau crew' and 'Jennie and Chris the Tentatrice crew' (thanks Pip!!). 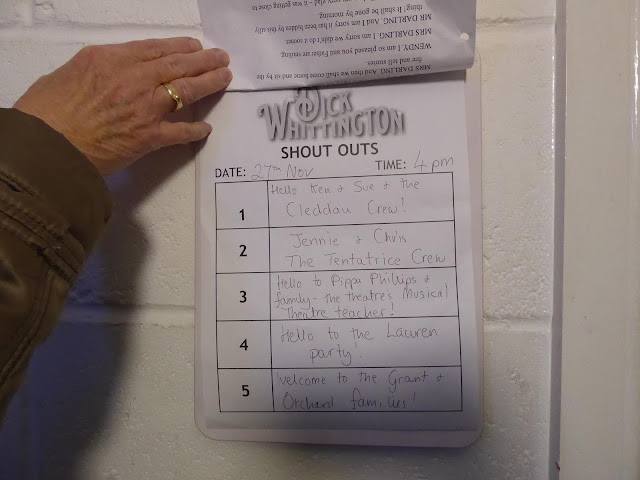 The acting and singing were excellent - the Queen Rat, the Dame, the Cat and actor who played three parts (Fairy Fee, Nance and The Contessa of Petiti) stood out for Chris and I.  The costumes were just brilliant and as over the top as you would expect at any decent panto.  As for the set design - what can I say, but that we were in awe of Pip's talent and so many hours of hard work.  The level of detail is quite extraordinary.  It was worth every minute of your blood, sweat and tears, Pip.  There is a display area celebrating 50 years of panto at Chipping Norton which included one of Pip's models which is 1/25th of the real thing and accurate in every detail. 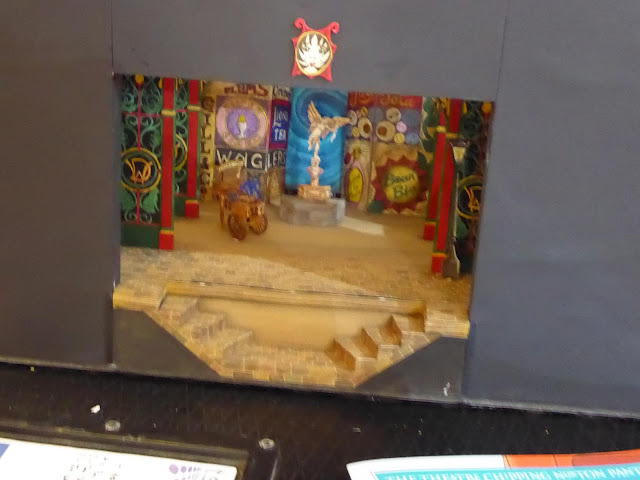 None of us had ever been to the theatre in Chipping Norton before.  I had no pre-conceived ideas, but was surprised at just how small it is.  It leads to great intimacy and I would urge anyone who lives close enough to go. Even it you have to travel, the Premier Inn is a good place to stay.  There has been talk of making this an annual Cleddau/Tentatrice event!

The evening was rounded off with dinner in The Blue Boar just round the corner from the theatre.
Some months ago we ordered solar panels which we were told would arrive in October.  A phone call advised us that it would now be November.  Then suddenly last week Chris got a call saying the scaffolding would be erected on Friday 25th November - this is my current view from my craft room/study/spare room. 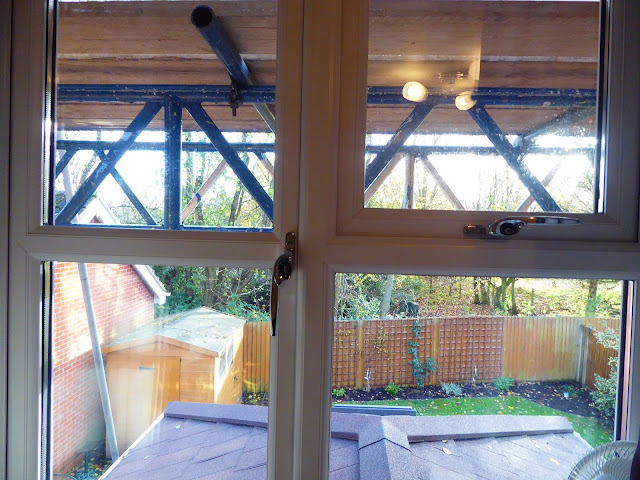 The panels were going to arrive at 08:00 on Monday 27th ready for installation starting that day.  That meant a 06:00 start on Monday to get home in time until Chris got another call to say they were very sorry, but that the earliest they would be there was midday - Phew!  It meant we could enjoy breakfast with Sue and Ken before heading home.  It is now 17:45 on Wednesday 30th November and we are still waiting for the panels which we gather have not arrived yet!  Watch this space.
It was a very successful trip and rounded off my 'theatrical November' in style with the added bonus of a catch up with Sue and Ken.  I miss the days of sailing around together for several months over the spring, summer and autumn.  C'est la vie.
We will be seeing the family over Christmas. I don't think anything of great note will occur (unless we do actually get the panels!) before the New Year, so I will wish you all a very Happy Christmas and all the best for 2023.