At the end of my last post, I mentioned a special event that was on the horizon.  The day dawned bright, well dry and not too chilly at least. We needed a dry and relatively warm afternoon.
What was afoot?  It was my 70th birthday.  I had not had any intentions of marking the occasion due to the uncertainties of life with covid around.  When things looked as though some sort of normality was on the cards our daughter in law (Jo) suggested that I might like to share some sort of celebration with our eldest granddaughter (Molly) who would be 18 on 2nd September.  Her due date had been the 20th August, but she kept us waiting.  At one time I thought she might even be a birthday present for me, but no she waited that little bit longer and shares a birthday with our boating friend Sue (Boatwif) from nb Cleddau.
Once the idea had been planted, I put my thinking cap on.  It was decided to have tea, cake and bubbly in the garden in the afternoon followed by a meal out in the evening.
The day started with a family Zoom call - three households from England, one from New Zealand, one on the Isle of Wight and one in mid Wales (note their enviable blue sky!)

The weather played ball for the afternoon and we even got a bit of sunshine every now and then.  I was assured by Jo and Sarah (our daughter) that cake would be provided and they did us proud.  Sarah made an amazing sponge cake and a selection of small cakes as well. 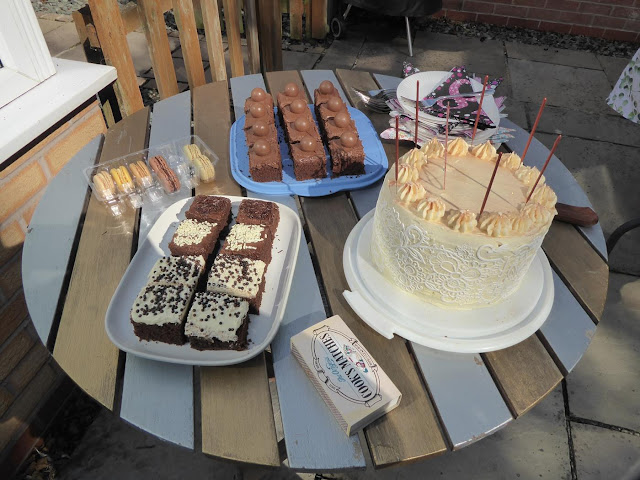 and Jo provided doughnuts and macarons.

Molly and I cut the cake together 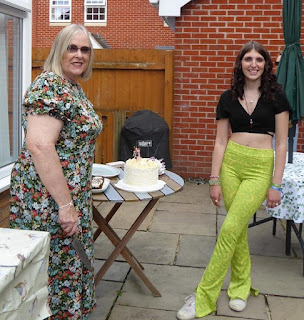 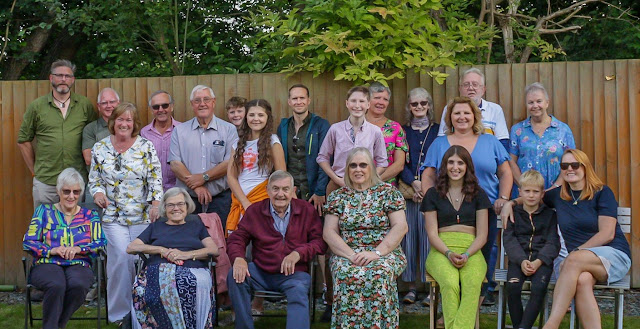 We spent a wonderful couple of hours together before we all headed off to prepare for the evening.  There were 8 of us staying here, 7 in a local Premier Inn and 4 in their home not far from here.  The fleet (5) of taxis arrived on time at the respective places and conveyed us all (suitably booted and suited!) to our chosen venue called The Orangery which is part of an establishment called The Old Rectory. 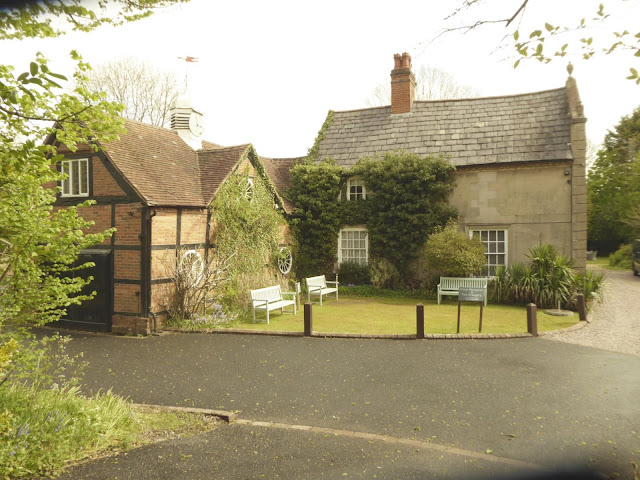 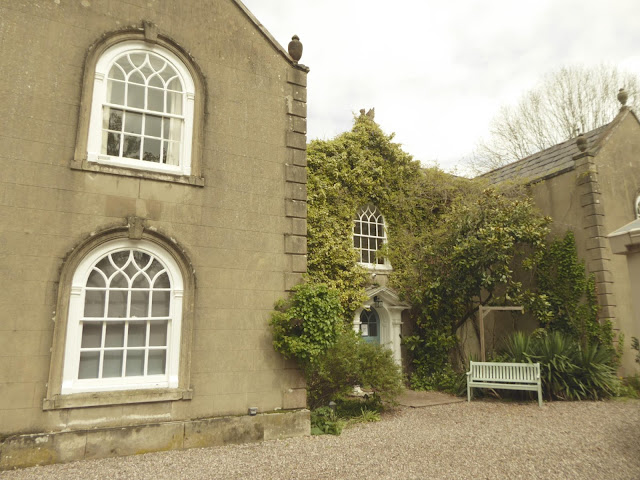 The Lavendar Room as we saw it when we first visited a couple of months ago - it was to be ours for the evening. 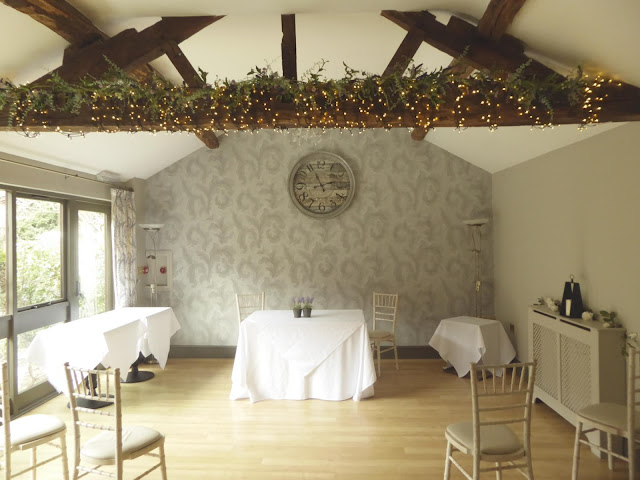 Sarah and family had gone ahead with suitable decorations.  The only stipulations from the venue were no confetti on the table and no blu tak on the wallpaper on the far wall.
The eagle eyed will spot Sue and Ken (Boatwif and The Captain) were among the guests. 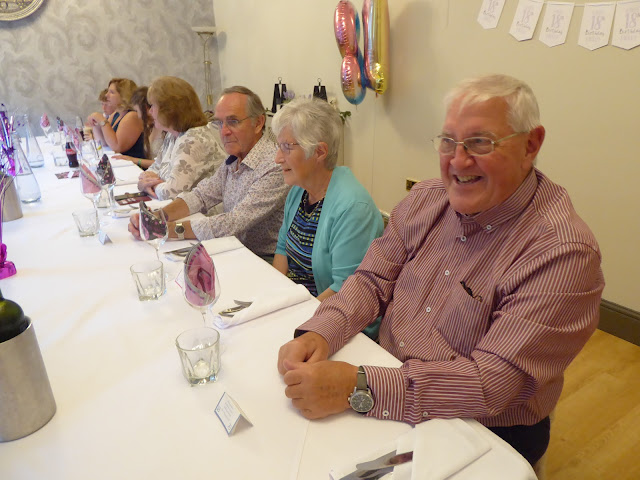 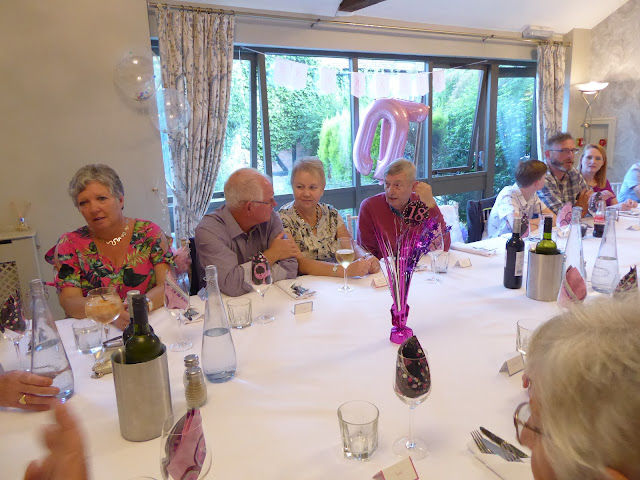 The food was first class and the service exemplary.  With that number of people we had had to pre-order.  The first course arrived and as if by magic and every person had the correct dish delivered.  When the same happened with the main, we felt compelled to ask 'how'?  There was no shouting of ' who is having the ****', there was no visible list in front of us, so how did they know?  If you look closely at the table you will see little cards in front of each person.  I had provided these with the name of the person and what they were eating (we all ordered 2 months ago and my brain is like a sieve, so I guessed others might have forgotten as well!).  The head waitress said that as we all sat down she had made a note of our names and where we were sitting.  She then went off and wrote out a plan that they all worked to. It was most impressive!
All in all it was an immensely successful day.  What more could I ask for than a day with our closest family members and friends.  'Perfick' as a certain fictional gentleman from Kent might have uttered.
Posted by Jennie at 08:53

How lovely Jennie! Congratulations on reaching the next decade and I can see you all had a super day! (I beat you by one year, also with cake and bubbly in the garden, very naughtily having 8 people there instead of 6, but the village pubs were still closed sadly).
Best wishes, and I hope you can get your knee sorted,
Debby x

Thanks Debby. We did, indeed have a fabulous day. xx

Was speaking to the new owners of Tentatrice earlier — moored behind us at Merry Hill this evening! Undergoing a name change — but you’ll be pleased to hear that they are loving the boat, and all the extra space over their previous one.

Hi Adam, that is wonderful to hear - thank you so much. We are not surprised that they will be changing the name and are delighted that they are happy with the boat. We are in touch with them every now and then and may even meet up again one day. Please say hello to them from us. I have been watching your travels round our neck of the woods. In better times I would have volunteered to lend a hand along Tardebigge, but not with my knees at present. Jennie