I am sure our decision to sell may seem precipitous to some, but it is something we knew might be on the cards and has been discussed between ourselves for quite some time.  If you look back to when we set off on 29th June, you will notice that we were not certain we would make it to Derby, but we were determined to give it a go. Sadly, it was not to be, so the only sensible option is to sell up and find other less strenuous adventures to occupy us.  My knees will (I hope) recover and allow me to walk Monty again and I guess eventually I may get new ones.  Chris's COPD will not improve and we did not want to leave Tentatrice languishing in a marina for a year or so in case I got better.  She was built to cruise.

Boats are selling well at present, so it was just deciding how to sell her - through a broker or privately.  The latter was not an option.  Part of our mooring agreement with the marina specifies that we cannot sell a boat privately from the marina.  New & Used have the concession as brokers at Droitwich which really made the decision for us.

They required us to move everything not boat related (ie windlasses, fenders, boat hooks etc etc) from the boat.  A mammoth task done over many days.  We now have crates, bags and boxes of 'stuff' all over the house!  Once it was empty, the next job was a thorough clean inside and out, neither of which were too bad, but the job still needed to be done.  Sarah once again came to the rescue and on Friday 16th July she came over and spent the day with us getting to all the low down places inside that I cannot get to at the moment.  The next day (one of the hottest of the year) she and her younger son came over to help with the outside.  Sarah was to help me with the blue sides and the roof (she ended up doing at least three quarters) whilst our grandson got stuck in to clean the black.  His lack of height is a definite advantage doing that job!  I have to say he worked very hard and never complained.  I heard him negotiate his 'fee' with his mother - he settled on a bottle of Lucozade!  Needless to say he got some folding money from us! 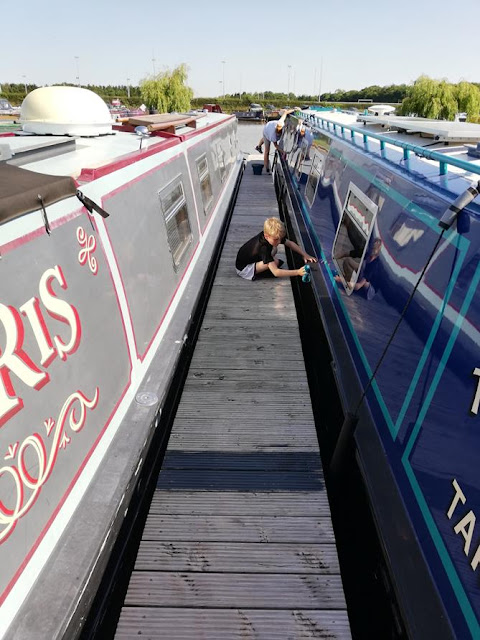 As you can see above the job was made easier as our pontoon neighbours are away (floating along the Thames I believe), so we could just pull Tentatrice across to do the port side.
The final jobs were for Chris - paint parts of the stove 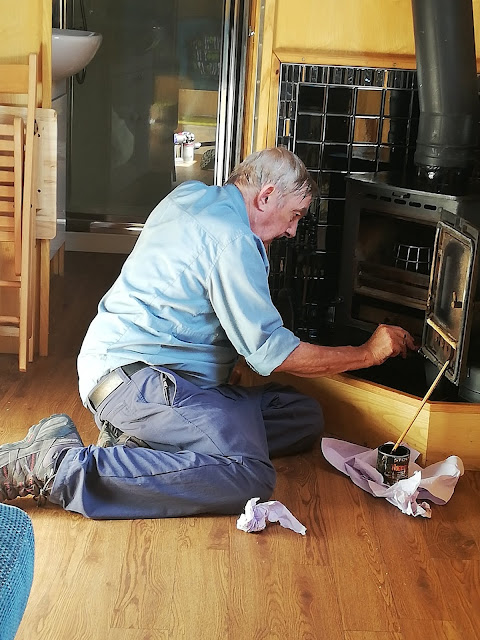 and touch up the sides 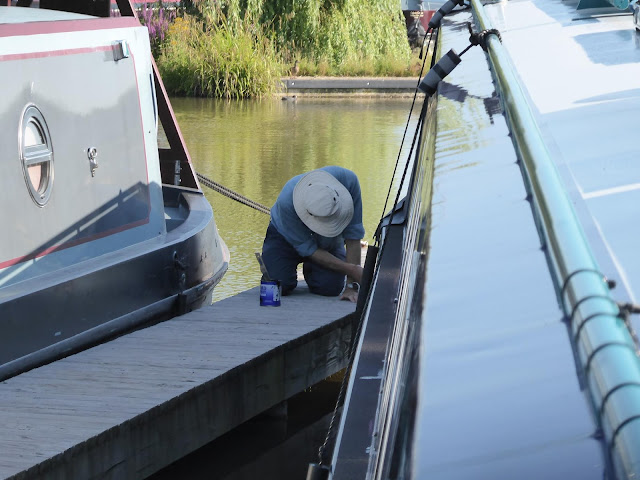 On Monday 19th July we formally handed her over to New and Used.  As I published last week, the details went live on Wednesday 21st July.

We still have mountains of stuff to sort out at home.  That will take a while.  The family have first pick. Most of the rest will end up going to charity.  We have a charity called "New Start" down the road who help those in need to make a 'new start'. Some will go to our local hospice shop, so I am sure it will all find good homes.

So now on to new adventures.  On Monday 19th July we went out for a pub lunch with a friend.  She and I attended our first face to face WI book club since March 2020 in someone's garden that evening.  I cannot tell you how wonderful it was to see 11 other people in the flesh rather than on a screen.  The book was not the best we have read, but we managed to cram in a lot of chatter.  When life was normal whoever was hosting would provide tea and cakes.  Over the last 16 months our numbers have increased (I wonder why?!), so a few people were asked to provide cake.  We ended up with so much, we all had to have 2 slices each!!  Such hardship! It was a memorable evening.  I don't think any of us will ever take meeting people in the flesh for granted again.

The next day was our daughter's eldest son's 14th birthday and we went out for dinner with them to celebrate. On Friday we headed to Derby to visit our son and his family.  I cannot actually remember when we last went to them.  They had a new kitchen in January, so it was good to see that in real life rather than on a screen.  We had a great time with them just relaxing and catching up on the months we have missed in their lives.

Back home now to await the arrival of our daughter in law and youngest granddaughter this today.  Evelyn was supposed to be on the boat with us now, so as a small compensation she is going to spend a few days here instead.  She has recently been gifted a sewing machine that had been languishing in someone's attic for years.  I was able to instruct her how to thread it and sort out the bobbin whilst we were with them and whilst she is here, we hope to get her some material and a pattern, so she can go home in something she has made herself.

I am having an x-ray on my knee on Saturday and I am already receiving physio.  All that is left to do now as far as the boat is concerned is to wait for her to be sold, so watch this space!

Oh Jennie, I do hope you are coping better than us! We still wonder if we made the right decision, but the sale is all done and dusted now and the new owners are on board. we still haven't seen anything really suitable for us, but we're hoping more people will sell up later in the summer (we would then be landed with marina fees for the winter, but hey).
Best wishes to you both, healthwise and salewise
Debby and Dave xx

So sorry to hear that you are at sixes and sevens Debby and Dave. I am sure the right boat it out there for you somewhere. Take care and please let us know when you find 'the one'. Jennie and Chris xx